Patagonia: the ultimate place to get away from it all

The land has become synonymous with the edge of existence

Around 12500 BC the first people reached the southern most part of South America, the end point of a journey that had started in Africa. Millennia later, in 1520, the Portuguese explorer Ferdinand Magellan became the first European to introduce this land to the world, along with stories of giants occupying its shores. Since then, Patagonia has become synonymous with the edge of existence, a myth-laden destination and the object of exploration fantasies.

A reputation as a final frontier and land of natural marvels has drawn everyone from Welsh settlers and Boers to Charles Darwin to the bottom of the world. And, since the publication of Bruce Chatwin’s 1977 classic  travelogue, In Patagonia, intrepid travellers have been lured here by the promise of finding solitude, adventure and eccentric exiles. Neither a country nor a province, Patagonia has undefined borders – it’s a nebulous region at the southern end of Argentina and Chile that stretches from the Atlantic Ocean to the Pacific.

At its greatest estimation, it spans more than a million sparsely populated square kilometres – the size of France, England and Germany combined. Dramatic, diverse and desolate in equal measures, Patagonia is made up of an other-worldly mixture of landscapes – glaciers pouring out of a spine of the snowy Andes, lakes studded with incandescent icebergs, the windswept plains of the world’s seventh  largest desert and mountain forests concealing pumas.

None of that was apparent from the three-hour flight from Buenos Aires to El Calafate, the heart of southern Patagonia. Instead I was struck by the sheer emptiness below – a limitless blank canvas unmarred by roads or settlements. On land the parched monochromatic steppe was broken up only by the wire fences and rusty corrugated red roofs of the occasional estancia – sheep ranch. For nearly a century, sheep farming was the only source of income.

I thought of how Argentinian writer Jorge Luis Borges had warned travel writer Paul Theroux not to journey to this arid land: “You will find nothing there. There is nothing in Patagonia.” At first this bare landscape, the physical equivalent of a JM Coetzee novel, reminded me of the Karoo – until I rounded a curve in the road in Los Glaciares National Park, 70km from El Calafate, and encountered the jawdropping spectacle of my first glacier – Perito Moreno – a 250km2, slowly advancing mass of blue and white ice bordered by Lake Argentina that commands the same level of respect as a smoking volcano.

The following days felt like I’d stepped into the pages of a National Geographic article. I strapped on crocodileteeth crampons and trekked along the edge of Perito Moreno past deep-blue fissures and streams, afterwards drinking whisky cooled with chunks of ice hacked off with an ice pick. I sailed on a catamaran across Lake Argentina, through an obstacle course of icebergs the size of office blocks, to the Upsala and Spegazzini glaciers, rising 40 storeys above the water like jagged fortresses. 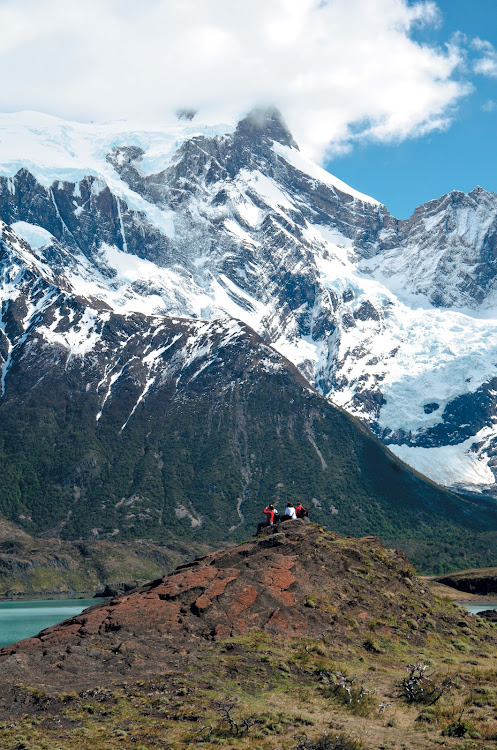 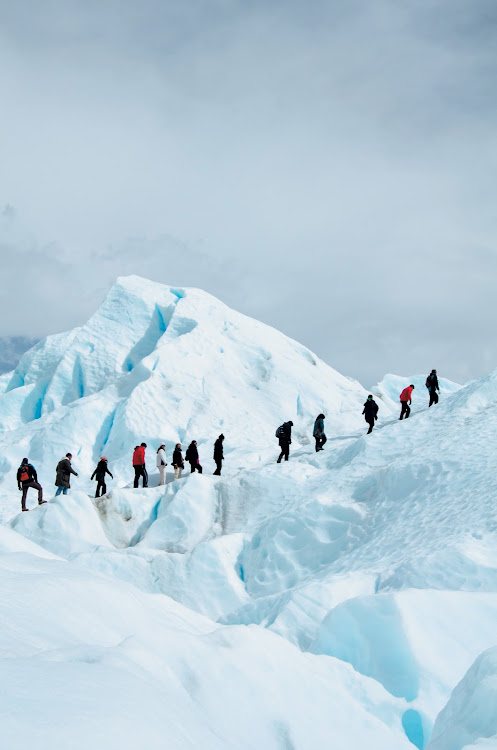 We fell into awe-struck silence when the huge ice chunks collapsed into the lake, accompanied by a deep primal rumbling. Wrapped up against the famously vicious winds, I rode Electra, a beautiful chestnut mare across the steppe, disturbing flamingoes and hares the size of fat Jack Russells. It didn’t take long for Patagonia to make a profound impression.

Three hours’ drive north of El Calafate, El Chalten was hurriedly established as an Argentinian outpost in 1985 to win a land claim over Chile and still has the endof-the-road feeling of a frontier town – albeit one with Alpine-style hotels and cosy wooden cabin restaurants serving locally brewed craft beer and steaming bowls of homemade ravioli. Hiking is the real trump card here – the hamlet is proclaimed as Argentina’s trekking capital – and almost everyone here sports trekking poles and muddy hiking boots.

One sunny day after a snowstorm, I tackled the nine-hour Laguna de Los Tres route to the base of Mount Fitz Roy and was rewarded with the heartswelling sight of the sheer granite cliff face looming over a snowed-over lake traversed by one daring cross-country skier as condors circled high in an intensely blue sky. Patagonia’s famous views are what make the photographic highlights but the quieter spaces in between were remarkable in themselves.

On the bus ride back to El Calafate from El Chalten in the gathering dusk we passed leather-skinned gauchos with red neckerchiefs, mounted on horses and rounding up sheep, ice-bergs and pink sky reflected on a distant still lake. We stopped halfway for coffee and empanadas at the lonely rusted tin roof hotel where Butch Cassidy and the Sundance Kid hid out for a month in 1905 after robbing a Patagonian bank. Then there was the five-hour drive in a rental car on empty gravel roads across the border into Chile and Torres del Paine National Park, as the plains turned from rusk-coloured to green. 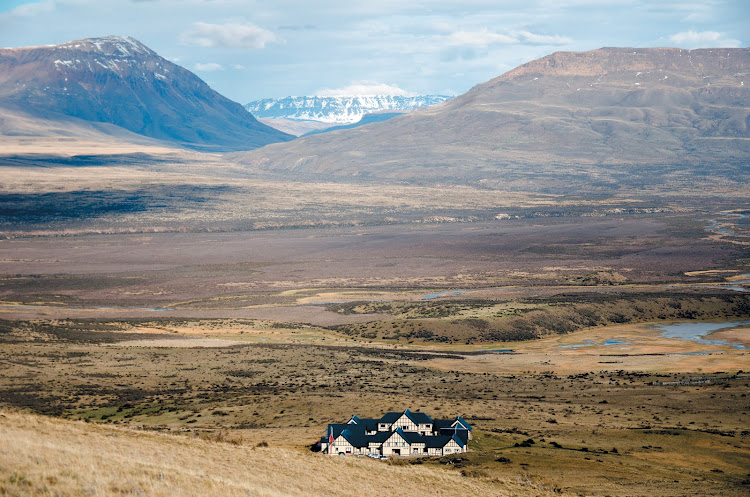 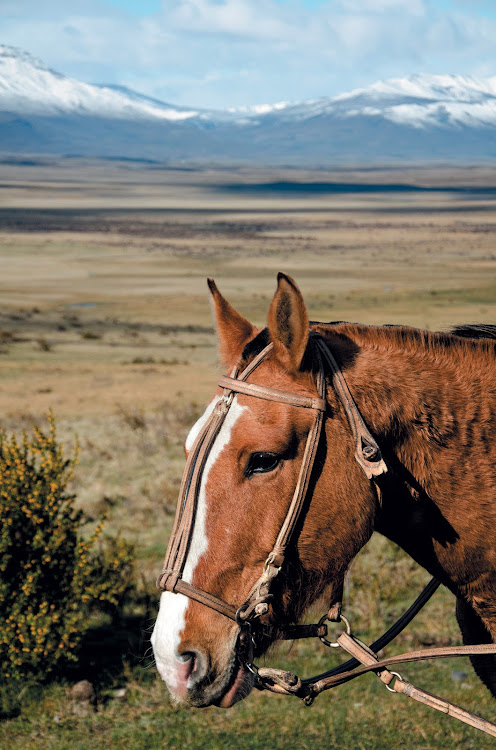 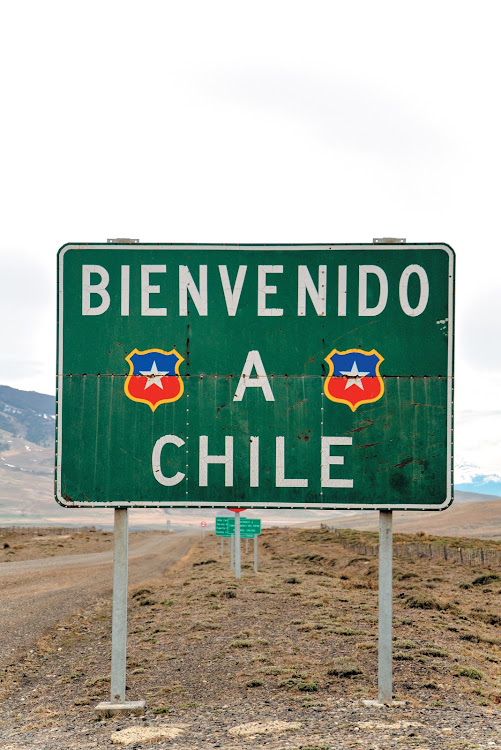 The Chilean side of the Andes receives higher rainfall than Argentina and the fertile land-scape is home to wildlife ranging from placid guanacos (a wild cousin of the llama) to armadillos . Wildlife spotting came second on the agenda in Torres del Paine to magnificent hikes – the best of which was an arduous half-day ascent through forests of southern beech and over icy rocks and thick snow to the base of the three granite towers after which the park is named.

The scene at the top was the jewel in Patagonia’s scenic crown, a glassy turquoise lake so still it mirrored the three cloud-shrouded grey monoliths encircling it above. In spite of its fame for rather gruelling hikes like that Las Torres trek, its ruggedness and edge-of-the-world setting, southern Patagonia is no longer the preserve of intrepid backpackers. For decades the accommodation here was on the camping end of rustic, but recent years have seen a crop of luxury lodges spring up.

Just outside Torres del Paine National Park is Patagonia Camp, where Scandinavian minimalism meets Mongolia in 18 understatedly stylish yurts perched on the shores of Lake Torro. By day, guides lead hiking and sailing excursions while by night, after eating grilled salmon washed down with a Chilean red, you fall asleep looking at the stars through the yurt’s roof porthole. 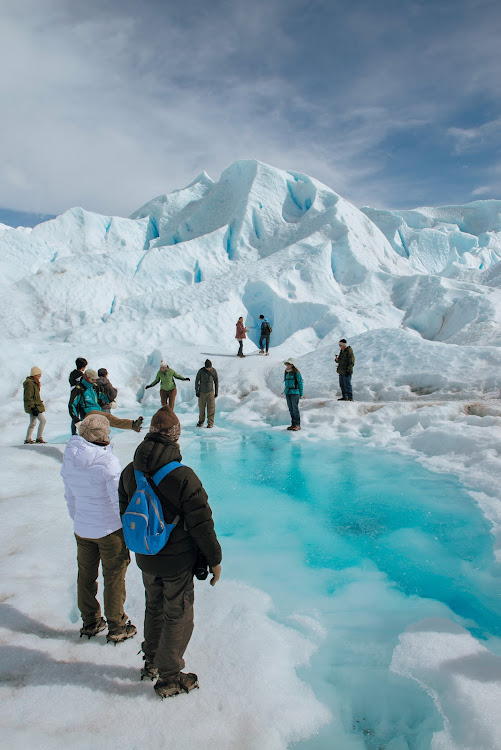 Back in Argentina, halfway between El Calafate and the Perito Moreno Glacier, Eolo Lodge is a tasteful estancia perched on a hill overlooking the snowy Andes and surrounded by rolling steppe. Its excellent food (think slow-roast lamb and goat’s cheese and white chocolate semifreddo) and high teas rival the poshest London hotel.

The indulgence of drinking Darjeeling and eating dulce de leche on a deep leather couch as a snowstorm rages outside takes nothing away from Patagonia’s sense of adventure and isolation. In an over-travelled world, where virtually every corner has been recorded on Google Street View, Patagonia has hundreds of mountains that are yet to be named. The furthest place our human ancestors could travel to by foot is still one of the wildest places on the planet, Jacuzzis notwithstanding.

South African Airways flies from Joburg to Sao Paulo and there are various options to Buenos Aires. It’s a three-hour flight to El Calafate (aerolineas.com.ar).

There are buses between El Calafate, El Chalten and Puerto Natales (near Torres del Paine) but renting a car, while expensive, is the best way to get around. Try Dubrovnik or Hertz.

Near El Calafate, Eolo Lodge perches on top of a hill in a cattle estancia with stupendous views. In El Chalten’s collection of low-key backpacker hostels, Hotel Destino Sur stands out as a stylish option. Close to the hike on the edge of town, it is a classy Alpine-style retreat with a Jacuzzi. Chile’s Patagonia Camp has yurts at the water’s edge with expansive views . The food is wonderful, the pisco sours strong and the guides excellent.

Almost all tourist facilities are closed from May to September. December to March are the peak months, when it’s warmest, while the shoulder seasons of October and April are less busy, with more unpredictable weather.