Pashiet Lakina was a young warrior of 22 when he speared the lioness. Although it is a quarter of a century ago now, he can still taste the fear and the exultation. He raises his spear to re-enact the scene. “The lion was this close,” he says, lunging within a few feet of an imaginary predator in the waist-high, sun-yellowed grassland. “The spear went through the shoulder, then through the belly.”

With his muscular arms and trunk-like torso, Pashiet, now 47, still cuts an impressive figure in his beaded jewellery and red Maasai robes. Even now he carries a spear, which he slams into the earth with a dull thud each time we stop to take in the views of the vast savannah, with Kilimanjaro, an imposing wall of mountain, rearing up to the south. Closer by are the gentler Chyulu Hills, moulded by a volcanic eruption a few hundred years ago and now a forested retreat for elephants. Insects thrum and ants scuttle over the blackened thorns of the whistling acacia bushes.

Twenty-five years before, the wounded lioness had lurched off into these same grasslands. “I followed it with my brother and eventually we found it dead, bleeding,” says Pashiet. “People celebrated. We cut off the tail and went to each village so everyone could see you were a strong, brave man.”

Why did he kill the lion, I ask of a man who now spends much of his time persuading fellow Maasai to forego that ultimate test of manhood. “The lion tried to charge my cows,” he says. “It is shameful for a Maasai if you lose a cow. I was angry.”

For the Maasai, cattle are more or less everything. A greeting in the Maa language from which the Maasai take their name, is, “I hope your cows are well.” Traditionally, they believed that all the world’s cattle belonged to them, a conviction that inevitably led to conflict with neighbouring tribes.

The Maasai once occupied all the Great Rift Valley from modern-day central Kenya to northern Tanzania. In the early 20th century, they were evicted from swaths of territory to make way for British settler ranches. Still, Maasai self-belief is unshaken. They retain much of their culture and their numbers are rising, putting pressure on the land. For them, the world is divided into the Maasai and the Meeki - the Maasai and everybody else. Naturally, to be a Meeki is not something to shout about. 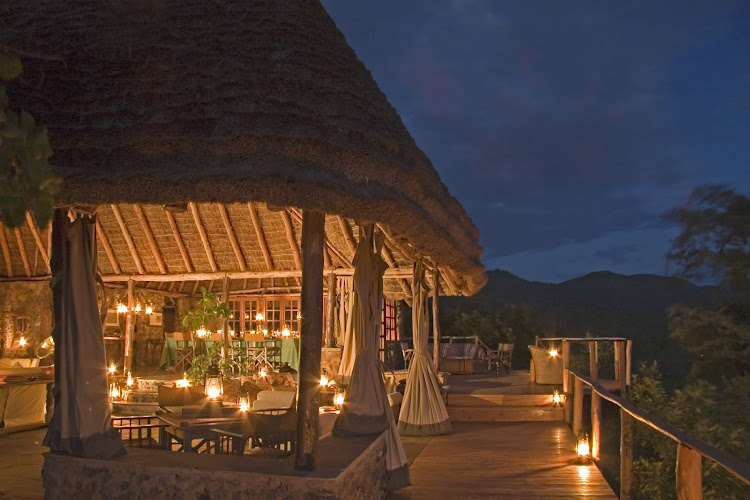 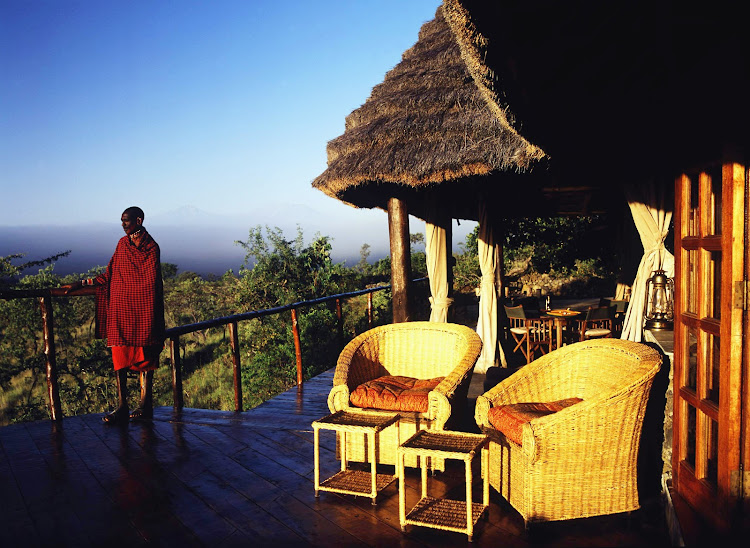 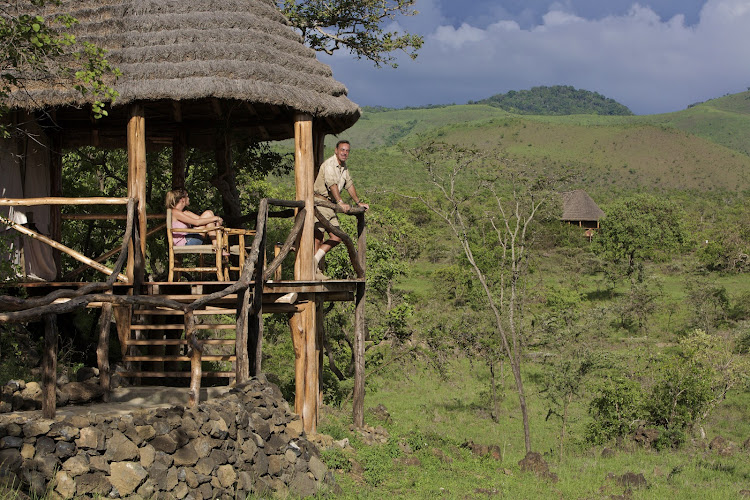 Pashiet works for the Maasai Wilderness Conservation Trust, founded by Luca Belpietro, an Italian who gave up a career in financial consultancy to move here, and who is, like Pashiet, a hunter-turned-gamekeeper. Brought up in Lombardy, from the age of 10 Luca accompanied his father on African hunting expeditions. He still keeps a framed photograph of Belpietro senior, rifle in hand, sat astride a majestically tusked, decidedly dead, elephant.

Luca and Pashiet met some 20 years ago when the Italian, now a naturalised Kenyan, embarked on a project to build a luxury safari camp in the middle of the Kuku Group Ranch, a 280,000-acre tract of land owned since Kenya’s independence by the Maasai who live there. Pashiet was one of the young warriors employed to dig the foundations.

After two years camping on site with no facilities beyond a pit latrine, Luca and his partner Antonella Bonomi opened Campi Ya Kanzi, a beautiful ecolodge where they now live and where tourists can stay in one of eight exquisitely appointed tented cottages. When you roll up the blinds in the morning it is to views of animals at the nearby watering hole and Kilimanjaro rising magnificently behind. The sole sounds at night are the chattering of birds and the occasional growling of lions. The camp is the only tourist lodge on the vast ranch, home to an estimated 17,000 Maasai (though you can drive all day and not meet any of them). For most of my stay, I am the only guest.

There are many luxury safari camps in Africa, and most make some kind of charitable contribution and nod towards helping the environment. Campi Ya Kanzi’s ethical credentials go way beyond that. It runs entirely off harvested rainwater and solar power, and though Luca funded its construction, the land and the lodge are owned by the Maasai community. Luca runs it as a commercial operation but pays $101 per guest per night to MWCT, a non-profit body whose diverse board ranges from Titus Naikuni, a Maasai who is former chief executive of Kenya Airways, to Edward Norton, the US actor.

The trust employs 265 people to run education, health and conservation programmes, but the camp’s $101 contributions specifically fund a scheme called Wildlife Pays, designed to discourage the hunting of lions. Dozens of Maasai are employed as rangers, known as “Simba Scouts”, who warn fellow Maasai when lions are in the vicinity so they can graze their cattle elsewhere. If cattle are killed, the owners are fully compensated. It is an example of what the environmental industry calls Payment for Ecosystem Services; another set up by the trust is a carbon-credit scheme, under which the Maasai will be paid to leave forests on the Chyulu Hills intact.

It is, says Pashiet, an odd thing for a Maasai to be paid for allowing lions to go about their slaughter. “At first, it was very hard to explain to people, don’t kill a lion,” he says. “If young warriors are told they can’t kill a lion, they are not very happy.” Still, he says, warriors get pride from their role as Simba Scouts and the programme is gaining traction. The number of lions speared has dropped to one or two a year and lion numbers have recovered. 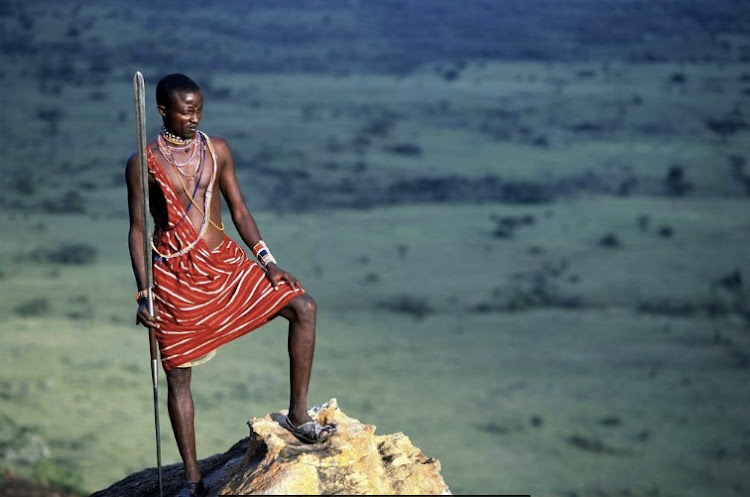 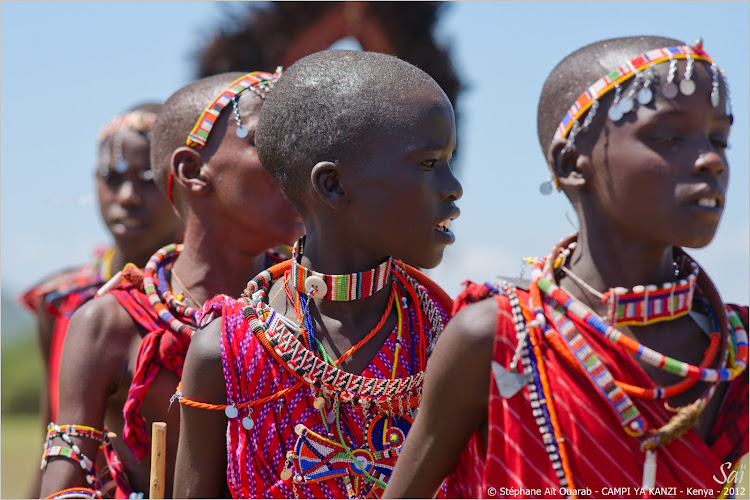 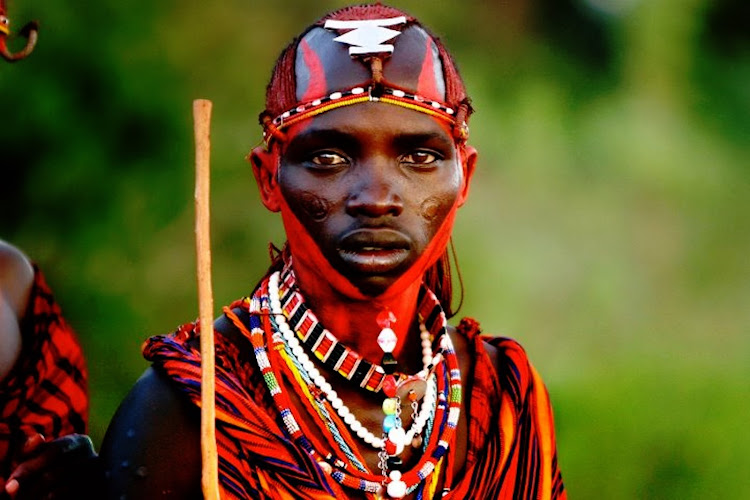 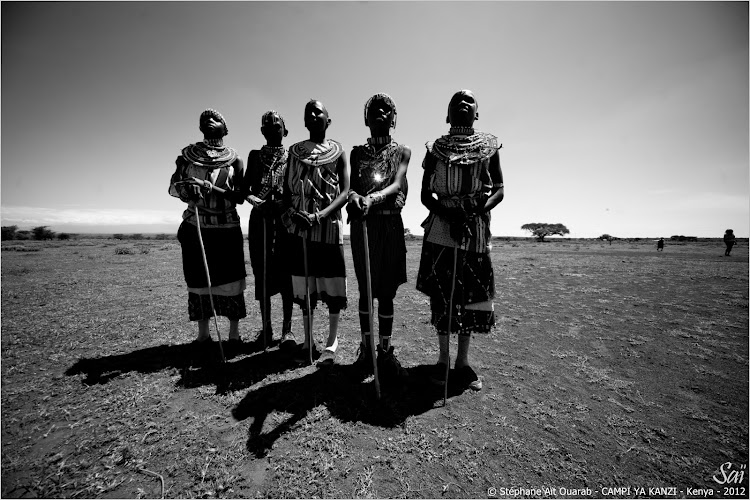 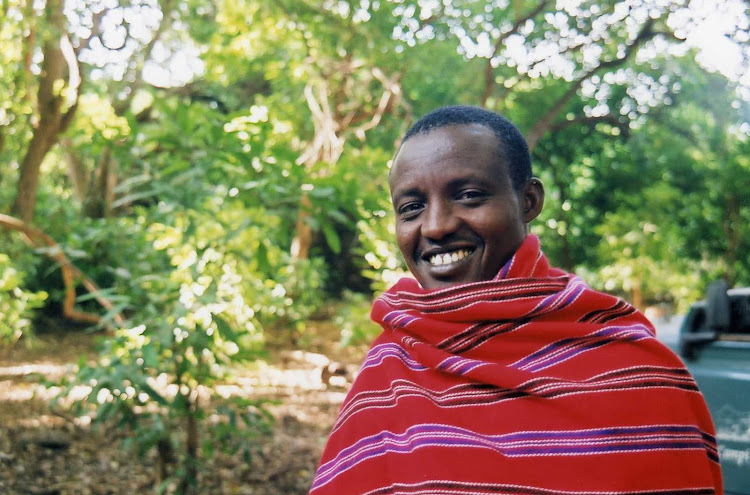 The trust has also helped set up the “Maasai Olympics” as an alternative to spearing lions. (Ladling soup for wealthy tourists at the lodge, where Maasai are hired as waiters and guards, is hardly a substitute.) For the winners - in running, spear-throwing, and jumping - there are prizes: a chance to run in the New York Marathon, for example, and, of course, gifts of cattle.

Luca concedes that attempts to tweak a culture are morally ambiguous. “I feel uncomfortable that, with my conservation work, I am stopping the Maasai from expressing their culture by going out and killing a lion,” he says. “The Maasai are a very proud tribe, if you want to use that word. In Kenya, there were more than 50 tribes, yet there are just three or four that have maintained their language properly and their law and their traditions.”

Another practice the trust is seeking to end is female genital mutilation (FGM), outlawed by the Kenyan government in 2011. Samson Parashina, the trust’s Maasai president and manager of Campi Ya Kanzi, is a strong opponent but says many mothers remain adamant that their daughters undergo the procedure before marriage. He hopes to introduce a right-of-passage ceremony to replace the celebrations that accompany “female cutting”.

“Change is inevitable,” says Luca. “The role of the trust is to give Maasai the chance to maintain whatever they want of their culture. If we can give the Maasai a reason to use their land more sustainably and carry on with their pastoralist life, some Maasai will be comfortable with that, but some will go to the city and become urbanised.”

A stay at Campi Ya Kanzi is to glimpse these dilemmas at close hand. On daily forays into the bush with Pashiet, the conversation veers between wildlife and culture, between the mating habits of the tiny, monogamous dik-dik, the smallest of the antelope, and the merits of ending FGM. Pashiet has two daughters. His 19-year-old, who wants to be a doctor or a teacher, was circumcised in age-old style, but things are changing fast. Her younger sister is not having any of it. “My 13-year-old daughter says, ‘If you try, I will go to the police.’ ”

We set out on a walking safari and Pashiet strides ahead, pointing out every feature of the landscape, from tiny swivelling grass seeds to the glowering granite cliffs. Every hill, mountain and outcropping has a name. “We call that one ‘rock to sharpen your spear’,” he says, pointing to the distance.

One day we plunge into the rainforest of the Chyulu Hills. The next we scramble over blackened lava spewed out in the Shaitani eruption in 1856 (the word comes from the Arabic for “devil”) or climb a rocky lookout to watch storms flash across the valley. To be immersed in such surroundings, to be that dot on the landscape, is to be humbled in the face of beauty most profound.

There is plenty of wildlife, though the conservancy is less chock-full of animals than, say, the Maasai Mara. That makes each sighting a moment to savour. One evening we spot a herd of giraffe, gambolling as if in slow motion through the twilight. Another time, we come across a herd of buffalo. We watch as they inch imperceptibly closer in preparation to charge.

There are daily encounters with gazelles and hartebeest, warthogs and kudu, and countless birds of prey, magnificent in their “umbrella tree” perches. One trip to look for elephants is unfruitful, but we are compensated with breakfast under a baobab tree, where an improbable spread of homemade bread, honey, marmalade, passion fruit, mango, bacon and eggs and countless other delicacies has been prepared.

One evening, just as darkness is descending, Pashiet’s radio crackles into life. Lion have been spotted by a Simba Scout. We speed off in an open-air vehicle into the night. Nervous antelope flit into the bush. They too know that lion are about. After half an hour of bumping across the grasslands in the pitch black, we finally see them. Seven lions, tearing at the carcass of a warthog. Floodlit, they are too busy with their dinner to notice. Aside from the snarling and the growling, the only sound is the crunch of teeth against bone.

We watch in awe. Throughout, Pashiet’s spear remains propped up in the vehicle’s front seat. He never reaches for it once. 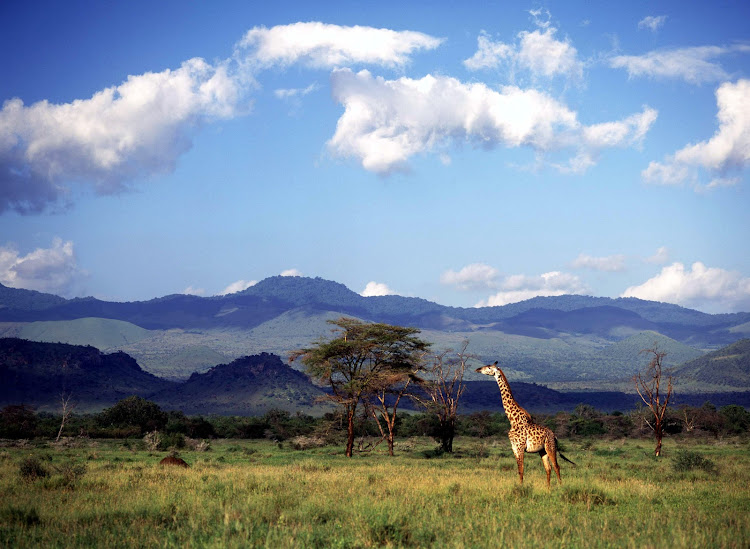 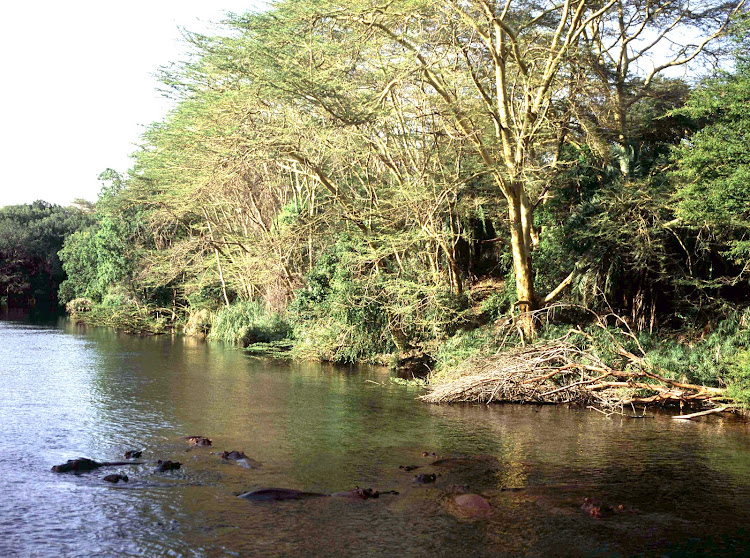 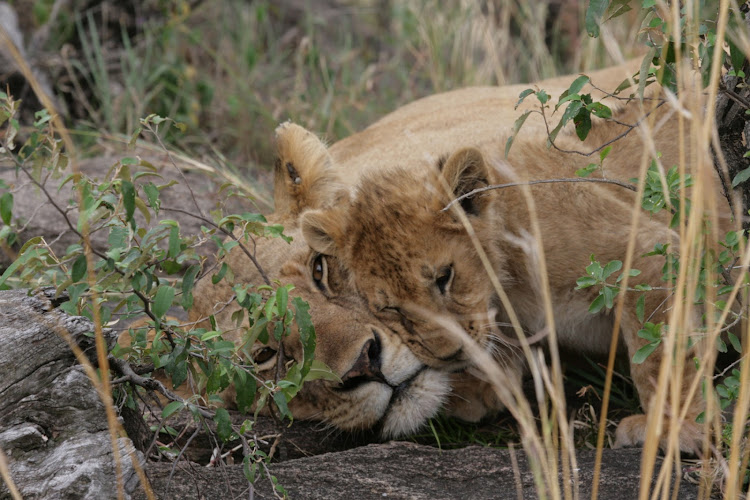 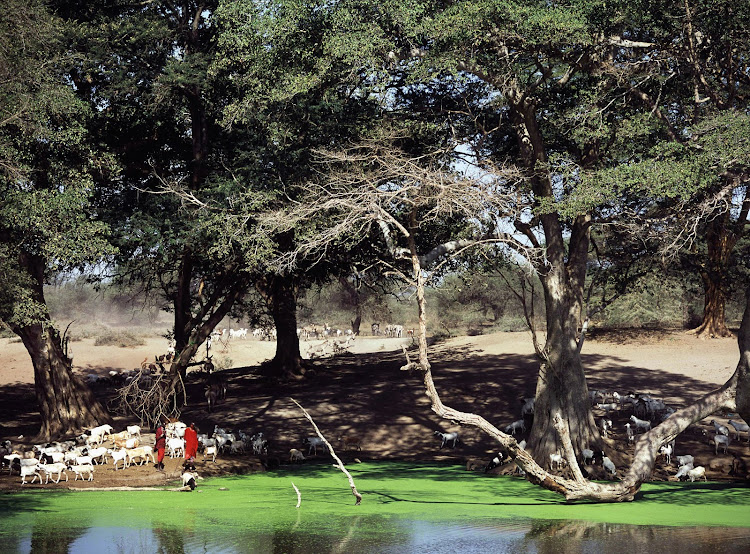