The former playground of Sinatra and Bardot has been relaunched — after a two-year, $250m facelift

“So, what do you think?” asked the woman in the lift eagerly. “I used to come here with my family a lot, so coming back is quite an emotional experience.” Dressed in a short, floaty dress and jewelled flip-flops, she explained that she grew up in Athens but now lives in London, and this was her first time back at the Astir Palace since it re­opened recently after much anticipation — and a €250m, two-and-a-half-year overhaul. Having arrived on an Aegean Air flight at 3am the night before, I had only vaguely taken in the polished marble lobby and the comfort of our giant bed. I didn’t feel I could give her much feedback. It was 11am and we were both on our way to the ground floor, to meet our families at the pool.

Blinking my way into the bright late May morning, I immediately sensed it wasn’t your standard hotel pool area. This was an artfully curated mise en scène for a relaxed cocktail-fuelled day of socialising in the sun. An interconnecting trio of heated swimming pools, with apparently floating olive trees in the middle, were surrounded by fleets of white sunbeds and cabanas, some of which had sofas and mini kitchens. Further cabanas were dotted along the curve of the seafront as far as you could see. Many of the loungers were occupied by couples, women in cutaway swimwear and diaphanous tassled kaftans, men in retro shorts and mirror shades, a goblet of Aperol spritz in one hand, a phone in the other.

That there is a buzz about the place comes as no surprise; the Astir Palace had been the It girl of the Athenian riviera since it opened in the 1960s. Situated on a glorious pine-clad peninsula, the hotel was built as part of a postwar drive to boost tourism and create a riviera to rival the Côte d’Azur. A roll call of the world’s most glamorous figures checked in over the decades, including of course Aristotle Onassis and Jackie Kennedy. “Each and every one who stayed there was an internationally renowned figure. Onassis was probably the poorest of the lot,” Grigoris Kasidokostas, founder of the Astir waterskiing school, says in Astir: the Legacy, a 2016 history of the resort.

Travel the world on a customised plane with world-class chefs, mixologists and spa experiences
Travel
10 months ago

Frank Sinatra had to escape through the back door of the restaurant kitchen to avoid the crowds, while Brigitte Bardot caused such a stir she deployed a lookalike, complete with headscarf and shades, to sunbathe at the hotel beach, in order to satisfy the long lenses of the photojournalists. The real Bardot, meanwhile, ordered room service in her suite. Rudolf Nureyev, Liza Minnelli, Jane Fonda, Paul Newman, Roger Moore, Charles Aznavour, Vangelis — they were all there, as well as heads of state including Nixon, Carter, Mitterrand, Thatcher, Mandela and, most recently, Obama.

The peninsula is just south of the seaside Athenian suburb of Vouliagmeni, which became known in the 1930s for its thermal swimming lake, still enjoyed today for its year-round warm waters and mud baths. Slowly the area gained in popularity and after a glitzy yacht club opened, as well as a marina and beach club, it began to draw an elite crowd of shipowners, business people and politicians. The beach club even boasts its own ruins — the sixth-century BC Temple of Apollo Zoster was discovered in 1924 by children of a nearby orphanage digging around in the sand. (The orphanage, which is still open, somewhat incongruously remains part of the 30-hectare estate owned by the Astir group).

The hotel’s tripartite complex was developed in stages. A group of bungalows were built first, in 1961, followed by a hotel building, Arion, in 1964 and the more resort-like Nafsika in 1979 (in all there are 303 rooms, suites and bungalows). The slick modernist concrete design, and airy interiors decked out with furniture by Charles and Ray Eames and Finnish master Eero Saarinen, became a symbol for a modern Greece. And being situated just half an hour from Athens international airport, the hotel soon became a hotspot for a global jet set.

But even more gratifying perhaps than the glitterati are the many Athenian families who have remained faithful to the hotel over the generations, such as the lady in the lift. And they are the ones for whom this luxurious re­opening is both thrilling and emotionally charged. Will it have lost its historic feel? Will the service be as good? Will the clientele change? And will they balk at the starting prices: €350 for the cheapest bungalow, €450 for a hotel room?

Previously majority-owned by the National Bank of Greece, the hotel and beach club were sold in 2016 as part of the drive to reduce national debt. The new owner, Jermyn Street (an investment fund part-owned by Abu Dhabi, Kuwait and the Turkish Dogus group) brought in Four Seasons to manage the hotel — giving the Canadian operator its first property in Greece. The subsequent overhaul involved Greek architects AETER and K-studio as well as New York-based Meyer Davis. Meanwhile, Martin Brudnizki, the Swedish master of hotel interiors, was entrusted with the design of three of the restaurant and bar areas.

The clean lines of Arion’s 1960s façade, and the staggered structure of Nafsika, sympathetic to the curve of the headland, have been kept intact — although the dazzling concrete looks like it has had a good blasting. At first glance the hotel looks unchanged, but its interiors have been redone completely — to let in more light, and more Greekness, reflected in the 2,000 works of art by contemporary Greek artists. 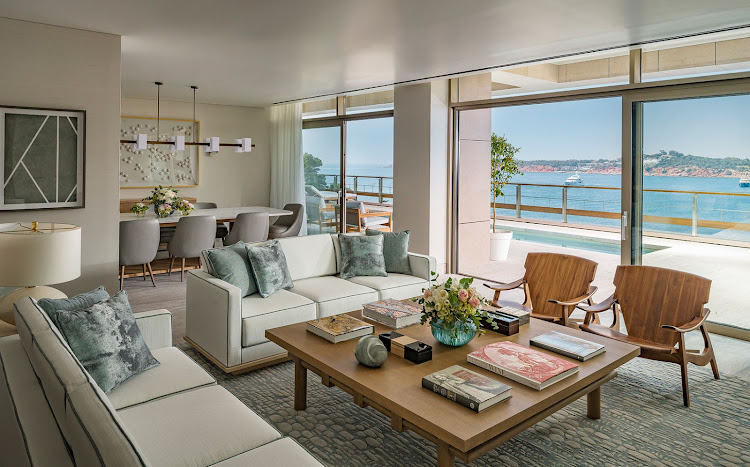 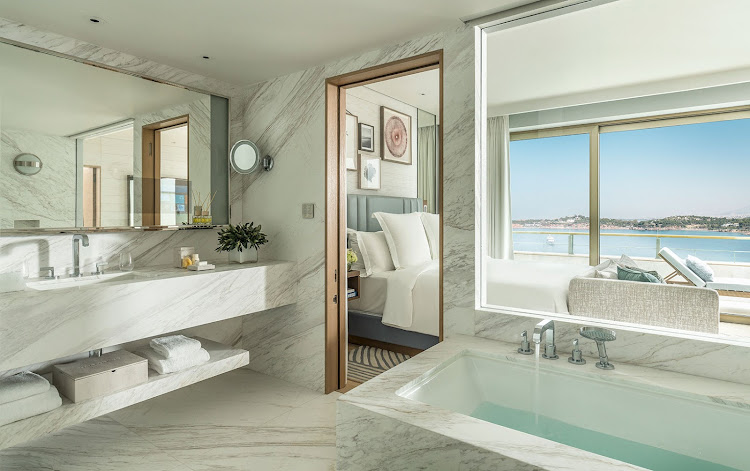 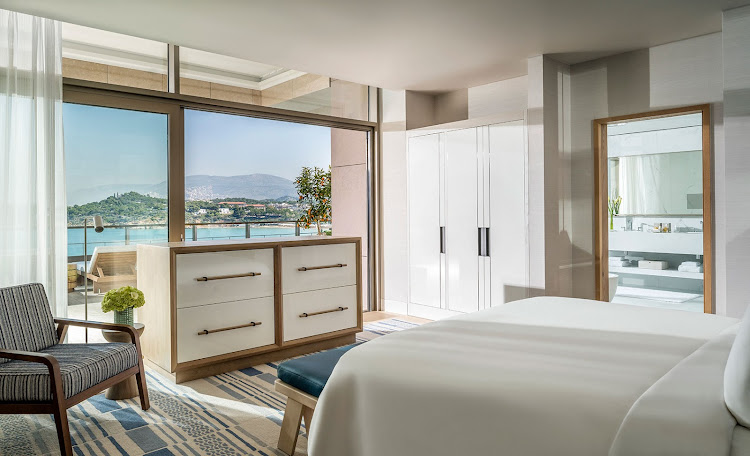 And while a 1960s aesthetic has been retained in the furniture and lighting, the space has been rethought for a clientele whose habits and priorities have inevitably changed — catering for a desire for less formality, more lounging, and being able to eat and drink at any time of day. The resort is striving to be more eco-conscious too: it boasts a zero tolerance of plastic (although the recyclable water cartons had yet to arrive, the hotel’s PR told me apologetically), while the resort’s plants and herbs are all incorporated into the cooking and spa products (herbs are turned into essential oils via a trip to Switzerland). Perhaps most significantly, the staff of 650 is 90 per cent Greek, trained up to rigorous Four Seasons standards.

The Avra bar area in Nafsika, designed by Brudnizki and his team with its two-storey floor-to-ceiling windows giving on to a view of the sea and the coastline of Vouliagmeni, now has a trendy central bar, a move that, according to Brudnizki, removes “a sense of hierarchy throughout the space and helps break down barriers between guests and encourage a sense of mingling and celebration”.

Over in Arion, Pelagos, the hotel’s upscale Greek dining spot, showcases Mediterranean fish, grilled whole and, as the hotel blurb puts it, “deboned tableside”. This elegant space has the feel of an old-fashioned yacht, with a shiny marble floor designed by Brudnizki to mimic the patterns of ships’ flags. For those wanting a more laid-back holiday vibe, the beachside Taverna 37 offers a moreish Greek salad 2.0, and (along with all the other restaurants) a simple, inexpensive kids’ menu, for little ones not keen on grilled octopus.

The hotel’s commitment to families is evident: a supervised poolside kids’ club lets parents drop off their children and pick them up whenever. Ours were sceptical about being deposited in what looked rather like a nursery, complete with AstroTurf, but came out beaming, carrying homemade passports with Polaroid photo mugshots. A watersports area along the hotel’s boardwalk offers adrenalin highs for older kids, and there are plenty of in-room treats too (slightly too many if you ask me: a large basket of gummy bears appeared one afternoon, only mysteriously to disappear shortly after).

During our short stay, all the rooms were full. As well as the groups of returning Athenian families closely inspecting the hotel’s new incarnation, a new type of guest was in evidence: the Four Seasons groupie, a brand-loyal well-heeled international traveller. It’s hard to say who will be the more demanding.

It was the day of the Greek elections, and a Monday bank holiday meant extra Aperol spritzes. Lying by the pool, it struck me that the setting was a match for any of the chic island resorts, and yet somewhere beyond the hills of Vouliagmeni stood the Acropolis — only a 45-minute taxi ride away. Just slightly too far, unfortunately, to get there and back before lunch.

In the island’s quieter south-west, new villas are mixing mod cons with traditional touches — and glorious views of unspoilt beaches
Travel
1 year ago

Can a revamp of Paris’s only Left Bank grand hotel retain the soul of a building that holds an extraordinary place in French history?
Travel
1 year ago