One of the phone’s more unique features is the Ultra Spectrum Camera, which allows fluorescent photography 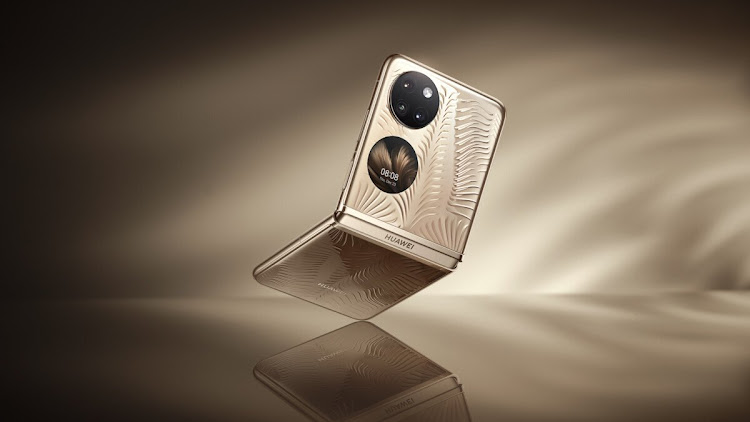 Huawei’s no stranger to foldable phones, having launched various iterations of the Mate X series over the past three years. Unlike the Mate X series with its bookstyle design, the P50 Pocket is a clamshell foldable available in a standard or premium variant, the latter being the one currently on sale in South Africa. Sporting a metallic-gold chassis designed by haute couture designer Iris van Herpen, the P50 Pocket Premium Edition has the same futuristic lines as her collections.

Steve Jobs once said: “The design is not just what it looks like and feels like. The design is how it works.” Huawei’s clamshell foldable boasts striking, high-end design and some impressive specs. These include a larger battery (with faster fast charging) than the Z Flip 3 5G, a less noticeable crease on the display, and a better camera array.

Honor brings some magic back to the smartphone landscape

Formerly a subsidiary of Huawei, Honor has been reborn as an independent brand free of sanctions its former parent faces
Tech & Gadgets
1 month ago

One of the phone’s more unique features is the Ultra Spectrum Camera, which allows fluorescent photography (you can use it to see if your sunscreen has been applied correctly). The P50 Pocket Premium Edition comes in gold and ships with a charging cable, 40W charging brick, wired earphones, and a protective case.

Clothing and technology have never been more connected than in 2022; whether on earth, in code, or within the meta-madness of our modern civilisation
Tech & Gadgets
1 month ago

Microsoft has announced the latest edition to its Surface line, the Surface Laptop Go 2
Tech & Gadgets
1 month ago
Next Article
Commenting is subject to our house rules.
© Wanted 2022 - If you would like to reproduce this article please email us.

The intersection of tech and design

Meet Vespera, the new smart telescope that lets you ...

Sonos launches their most compact soundbar yet