The future is here: we’re not quite at the level of the Jetsons, but we can command disembodied robot voices to fulfil our (almost) every whim 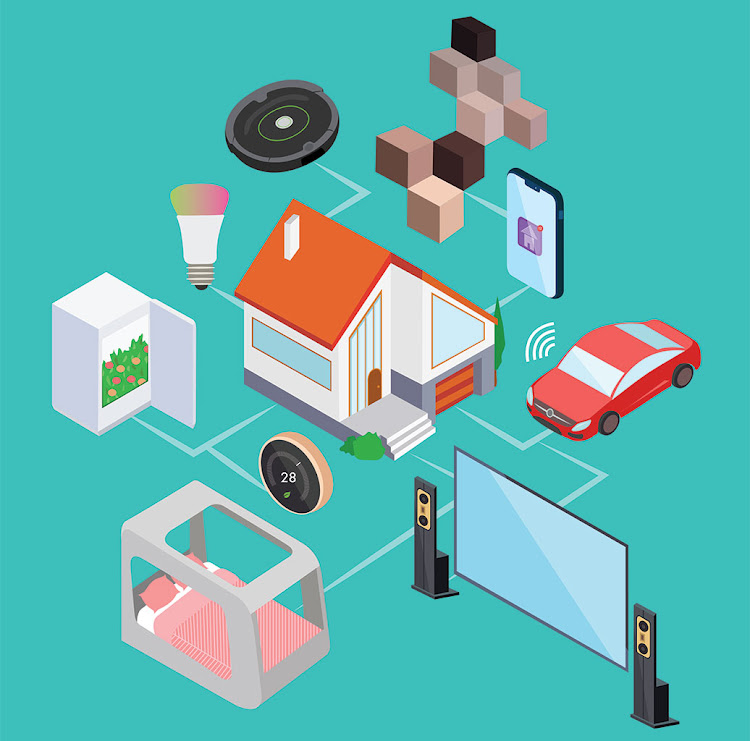 Alexa, Siri, and Google Assistant aside — or, as I like to call them, the Charlie’s Angels of virtual personal assistants — thanks to the world of tech’s infatuation with The Internet of Things (IoT) pretty much every new gadget on the market is all about automation. It’s practically impossible to find any gizmo that doesn’t come with wireless connectivity, not to mention its very own app — and bonus points if it’s modular. And if that weren’t enough, you have the likes of Samsung integrating Bixby, its AI overlord, into all of its products, meaning you don’t just have a smartphone anymore, but a smart fridge as well — and they’re sharing your secrets.

But why not have a fridge that tells you when you are out of milk and allows you to order from your local store straight from a touchscreen on its door? Why not have a robot that mows the lawn for you? (Thanks Robomow RS622!) You work hard for your money: your house may as well work hard for you. We decided to play house and let our tech Barbie playhouse fantasies run wild with some of the best gadgets your money can buy — and a few that it can’t buy just yet.

You probably think your home’s future is in the palm of your hand — ie, your smartphone — but you may be surprised to find that soon you will be able to control your whole set-up from an entirely different place: your car. With the likes of Ford partnering with Amazon, you will soon be able to voice control your own homebody Alexa from your dashboard, and ask her to heat up the oven when you’re on your way home, or to press play on your favourite song as you drive into the garage that automatically opens for you.

Likewise, Mercedes-Benz is now working with Google-owned Nest, which recently programmed its offerings of cameras and thermostats to act as a hub, together with other connected home devices, such as Yale Smart Locks and Philips Hue Lights.

Soon your car itself will be automated, if Elon Musk and Google have their way, so you may as well spend that time reading the manual on how to program your future perfect home life. Sure, yelling out things at your car has never looked as sexy as Will Smith makes it out to be in iRobot, but if you arrive home to everything being exactly the way you like it, it’s more than worth it.

If you are too impatient to wait for that life to arrive, you could always try Automatic. This gadget plugs into your car’s data port, and not only monitors your car for you, but also works alongside If This, Then That, an app that streamlines all your IoT devices and apps in one place. So not only will it message your loved ones when you’re in an accident, but it will also work with your smart devices to have your house ready and waiting for you.

Now that you’ve arrived home, it’s time to relax. Everyone likes going to the movies, but who even has the time these days? And the age-old (man-cave) question of whether to splash out on a projector or a massive TV is always a sticky one. You know you want 4K, but there is something quite magical about going supersize when watching The Rock invariably destroy yet another city. So why not split it both ways and get Samsung’s The Wall, which, as the name suggests, can fill your whole wall. It’s made up of modular MicroLED panels, so you can have your TV your way and make it as large as you want — even going as big as staggering 146 inches without a hitch.

With summer around the corner, one up the Joneses' garden party with the definitive display of outdoor entertainment
Tech & Gadgets
4 years ago

And, since you’re going to need some roaring sound with that, call in the best. Steinway & Sons is not only the world’s best piano maker, but it also, together with Lyngdorf Audio, makes the best sound systems. The brands will design a bespoke sound system just for you, using precision technology designed in-house. No two movies starring The Rock are alike (apparently), so why shouldn’t your sound system be the same?

And forget Apple TV: bump up your experience and watch your Netflix through your Xbox One X. Shooting up some aliens with your kids in 4K on the most powerful-gaming console ever made, or streaming the latest episodes of Grace and Frankie, has never been this fun.

Mind your feet, Roomba is in the house and cleaning up your popcorn spills. Sure, the little self-automated vacuuming robot has been around for a while, but it never gets old as it rides around cleaning for you and bumps into the cat. And why stop at the floors when iRobot Mirra 530 does the same to clean your pool? No more cabana boys necessary — much to the chagrin of some people.

But back to the kitchen we go. Sure, LG has had a fridge that can order milk for you since 2014, allowing the devices to nag you on HomeChat when you’re out of groceries — if your significant other bothers to throw out the empty carton in the first place. And, as already discussed, your fridge and Bixby will be chatting to each other real soon.

But this is our fantasy tech house so we want more than that. Why not go with an Everblume, an automated box that allows you to grow your own produce indoors. Basically, it’s a hydroponic garden fridge that you can open up and pick your salad from while it’s still growing in nutrient-rich water. Obviously, it also comes with an app that relays all the information the box collects as it adjusts the lighting, temperature, CO², and oxygen levels according to the plants’ needs.

If there was a book called Household Pet Peeves 101, coming home from the grocery store and realizing you forgot something dire would be listed as ...
Tech & Gadgets
4 years ago

The concept is not unlike the Philips Biotower, which was designed in 2009 as a part of the Philips Food Probe investigating the way that people eat. The concepts included a cutting board that monitored your nutritional intake, and a self-contained farm in your kitchen that came complete with a tiny fish farm. It just goes to show that the future takes a while to materialise, but when it does you will never have to worry about the freshness of your sushi again.

And when it comes to cooking your tiny farm produce, why not do it the most overwrought technical way possible with a WiFi-controlled sous vide immersion circulator? Sous vide is a variant of poaching, whereby the food is placed in a vacuum-sealed bag and placed in a vat of constantly moving, temperature-controlled water. Now you can control that water from anywhere, thanks to the Anova Culinary Precision Cooker. Or, if water isn’t your thing, there is always the Cider Grill, which does pretty much the same thing, but with a grill.

Now, thanks to IoT, you can Goldilocks your existence and get your room temperature just right. Opt for a Nest Learning Thermostat, which is smart enough to keep your home feeling just the way you like in the most energy-efficient way possible. Or, if you like to keep it breezy, you can go for a Hisense 10 000 BTU portable air conditioner that connects to your WiFi and can be controlled by your phone. But the biggest bonus, apart from being portable, is that it’s quiet and easy to install.

To set the mood, you could keep it simple with some Philips Hue Lights that let you control the intensity and preferred hue at the tap of an app. But, if you want something more dramatic and space-age, check out the Nanoleaf Aurora smart lighting system. It’s is made up of giant, triangular, modular panels, allowing you not only to illuminate, but also to create a statement — or several, if you adjust the colour flows, brightness, and speed.

Next step: time to serenade. We suggest carrying on with that modular-shaped life and rigging up a B&O BeoSound Shape. The Danish, wall-mounted, wireless speaker system is similar to the Nanoleaf in terms of tech practicality meeting art, but also provides ridiculously good sound, as well as coming in 10 different colours. Thanks to the B&O app and the company’s wireless connectivity network capabilities, you can set up speakers throughout the house to play whatever music you like, or keep the Barry White confined to the bedroom.

But if you do want to just have art on the wall for art’s sake (but with a tech twist), then look no further than Klio, which is a framed 4K digital art screen that allows you to program and display art downloaded from the web. Or you could just pick from the thousands of works uploaded by Klio’s community of paid artist and animators.

Finally, move over Hästens, because if someone is going to be sleeping in a ’60s idea of sci-fi fantasy, then looks no further than the HiCan. This concept is nothing short of a metal, box-like igloo that comes with its own projector, sound system, Apple TV, gaming consol support, privacy blinds, automated adjustable head and foot rest, and, of course, a wake-up alarm. It monitors your sleeping habits, your weight, and your environment for humidity and air quality. Plus, it can come in gold with lime-green, leather trim. What more could you ask for?

How the combination of Artificial Intelligence and Augmented Reality will create a future where not all will be as it appears
Tech & Gadgets
4 years ago
Next Article
© Wanted 2022 - If you would like to reproduce this article please email us.