The Black Hole Stephen Hawking never got to see 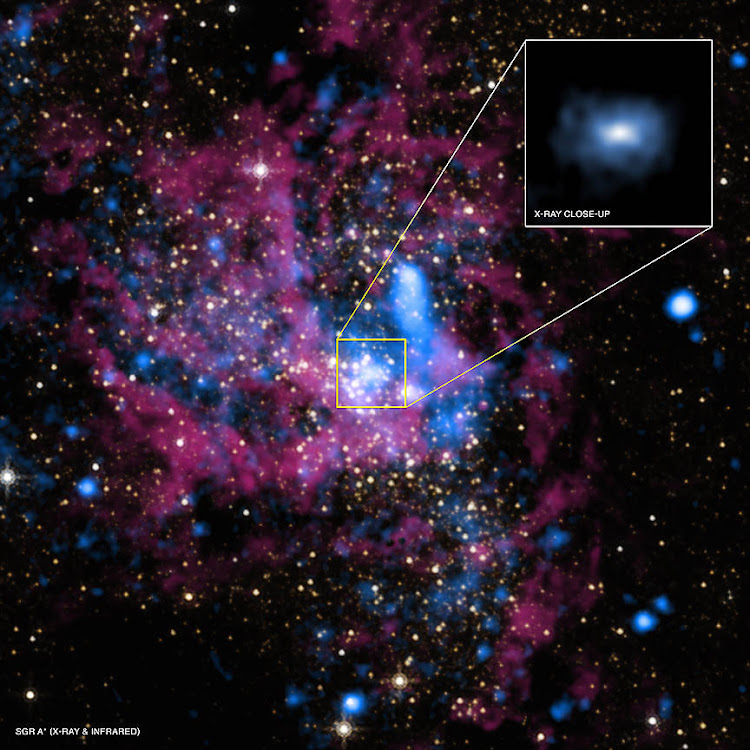 The center of the Milky Way galaxy, with the supermassive black hole Sagittarius A* (Sgr A*), located in the middle
Image: X-ray: NASA/UMass/D.Wang et al., IR: NASA/STScI

Superficially, it seems like the acme of perversity to suggest that Professor Stephen Hawking’s death earlier this month was anything like an untimely departure. The revered theoretical physicist – and unlikely pop-culture icon – was diagnosed with ALS in 1963, and encumbered with a grim prognosis to boot: the brilliant 21-year-old was primed for the likelihood of his imminent death, within an estimated two-year time frame.  Instead, Hawking – ever the maverick – endured well into his 70s, leaving an indelible mark on the history of modern science. How, then – particularly in light of Hawking’s manifold successes – could anyone lament his seasonable demise?

For an association of astrophysicists, however, the news of Hawking’s death has come as a tremendous blow. The Event Horizon Telescope team is a company of scientists working together to actually photograph a black hole; and, since the nature of black holes is the marrow of Hawking’s oeuvre, it does seem rather miserable that the imaginative cosmologist won’t be around to enjoy the fruits of their (and, indeed, his) labour.

Historically, black holes were thought to be – to put it unscientifically – insatiable voids: scientists assumed that they ingurgitated matter without allowing any of it to escape. But Hawking was ultimately compelled to concur with a theoretical physicist called Jacob Bekenstein, who purported that, because black holes seem to have entropy – systemic disorder, which is measured thermodynamically – they must therefore have temperatures, as well.

Hawking went on to conclude that black holes do in fact release matter, in the form of radiation particles – ‘Hawking radiation’ –  and eventually shrink in size. In short, black holes are phenomena that contradict our cognition of the universe according to basic physics –that is, according to the tenets of quantum mechanics and general relativity. For Hawking, who seemed to enjoy operating at the intersection of mystery and science, this was no doubt part of their abiding appeal.

The import of a scientific hypothesis, not unlike that of a religious parable, is sometimes reliant on a measure of faith

The fact that black holes appear to release some manner of energy is not in itself sufficient to allow us to photograph them: Hawking’s radiation particles do not comprise nearly enough light. But the EHT team is not trying to photograph these rapacious abysses, as such; they are using incredibly sophisticated radio telescope technology to capture what’s known as the ‘event horizon’, an invisible periphery surrounding black holes, and beyond which no light can escape. To put it no doubt simplistically, a visual record of this veneer would empower the astrophysicists involved to discern the outline of a black hole, by the gleam of distorted light passing through the point of no return.

The network of telescopic radio dishes powerful enough to penetrate a dense mantle of gasses spans the entire world, and, in April last year, yielded visuals of Sagittarius A*, a bright, compact blip at the center of the milky way that might indicate the location of a black hole. The images available from NASA reveal a strikingly beautiful billow of dappled lights, converging around what appears to be an especially bright nucleus. It’s not monumentally large or enrapturing relative to the image as a whole, but, reviewed in context, the glowing white pinprick assumes astonishing significance. The funniest thing, I think, about images of space, is how profoundly moving human beings invariably find the spectacle of these utterly impersonal, obliterating forces. Even seeing the earth from a distance engenders an almost religious experience, in the paradoxical guise of pure science.

A collection of music and field recordings of the natural world known as the golden record was placed in the Voyager. It left our solar system in the ...
Tech & Gadgets
4 years ago

The bizarre reality is that, in spite of the myriad theories that pertain to black holes, there isn’t actually any finite proof that any such things exist. As such, if the EHT team realises its goal of documenting a black hole over the next 12 months, it would supplement well-founded presumptions with the evidence necessary to knowledge. Visual proof would finally shed some light – if you will – on the nature of phenomena that appear to defy nature; and, on a more sentimental note, they would validate a definitive aspect of Hawking’s behemoth legacy. So I must concur with the grief-stricken scientists that there is a terrible irony in his missing what might have been the ultimate premium by a matter of months – but then, the import of a scientific hypothesis, not unlike that of a religious parable, is sometimes reliant on a measure of faith.