Man versus machine: when Garry Kasparov met his match

In ‘Deep Thinking’, the chess champion reflects on the 1997 battle with an IBM computer that ended an era of human dominance

In years to come, increasing numbers of people are bound to lie awake at night fretting about what happens when machines render their expertise obsolete. What will it mean for their jobs, their self-worth and their sense of humanity?

Few people have experienced that process as publicly and painfully as Garry Kasparov, one of the strongest chess players in history, who carried the "banner for mankind" in his epic clashes with chess machines. In 1997 the Deep Blue computer program, built by IBM, inflicted a narrow but psychologically crushing defeat on Kasparov in the glare of global attention. It was the first time that a computer had won a match against a reigning world champion in a game that has for centuries been a touchstone of human intelligence. 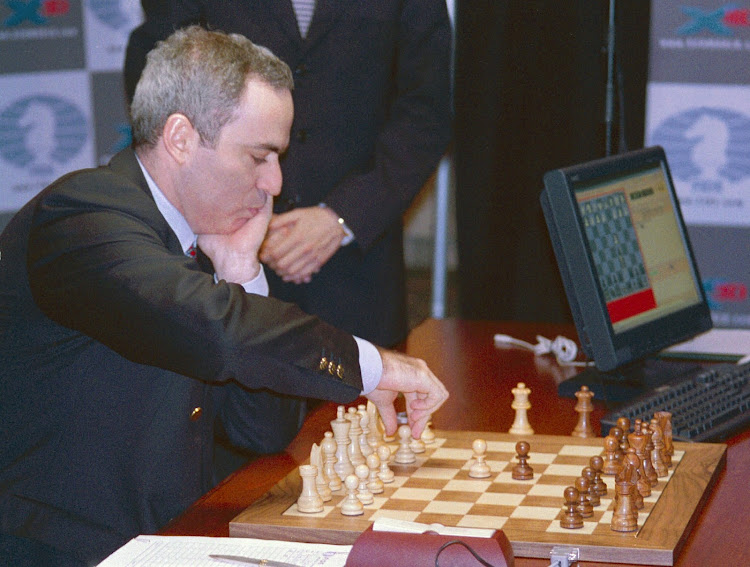 The raw emotion of that encounter in New York bursts out of the pages of Kasparov's gripping story, which he fully recounts for the first time in Deep Thinking. It is almost as if Kasparov is describing a death when he writes about his defeat. During the match itself, Kasparov appears to have run through at least four stages of the Kübler-Ross grief cycle, moving at rapid speed from denial to anger to bargaining to depression. This book, written almost 20 years after the match, reflects Kasparov's final reckoning with the fifth stage of grief: acceptance. What is striking, and reassuring, is that far from raging against the machine, Kasparov marvels at the capabilities of computers and is excited by the possibilities for future collaboration.

Anyone who has faced Kasparov across a chessboard will know what a domineering and brutal player he was in his prime. That is something I can personally grasp having once taken him on - with 20 or so other players - in a simultaneous exhibition match in Moscow. Unsurprisingly, I came second. But what I most remember was the sense of power and menace that Kasparov radiated as he paced around the room dispatching his opponents. He was like a manic, mechanical gardener dead-heading a rose bush.

Of the more than 2,400 serious games Kasparov played from the age of 12, he lost just 170. In his 15-year reign as world champion, from 1985 to 2000, he dominated the game like few others. Of course, Deep Blue was not in the least intimidated by Kasparov's belligerent personality or his stunning record. Indeed, the more victories that Kasparov recorded, the more data he generated to defeat himself. Having lost once before to Kasparov, the IBM team was determined to prove the superiority of its technology and sought to gain every edge over its opponent.

Lunch with Daniel Dennet: ‘don’t kid yourself that robots are colleagues’

What is consciousness? Will machines ever develop it? Over lamb and a large glass of red in London, the renowned philosopher talks to John Thornhill ...
Tech & Gadgets
3 years ago

Kasparov has written some fine books on chess before, analysing the best games of previous world champions in his My Great Predecessors series (2003-06) and also ruminating on real-life strategy in How Life Imitates Chess (2007). But his latest book, co-written with Mig Greengard, reads at times like a fast-paced psychological thriller.

Kasparov started the match well, easily winning the first game. But a surprise move by Deep Blue in the second threw Kasparov and he committed the "worst blunder of [his] career" by resigning when he could have forced a draw. Unable to process that defeat, Kasparov accused the IBM team of cheating, a claim he apologises for in this book.

Three energy-sapping draws followed in which Kasparov diverged from his normal style of play and resorted to an anti-computer strategy. The winner in chess is often the one who makes the next to last mistake. Deep Blue proved itself a maddeningly accurate and remorseless foe, nullifying Kasparov's attacking genius and blunting his mental strength. In the final, climactic game, Deep Blue played a devastating knight sacrifice and Kasparov collapsed within an hour.

Even though Kasparov praises the computing team's achievement, he accuses IBM of some underhand tactics. Refusing to hand over records of Deep Blue's previous games, reprogramming the computer after it crashed mid-game, and hiring a Russian-speaking guard, allegedly to eavesdrop on Kasparov's conversations, all incensed the combustible Russian.

Back to the Future lied, 2015 came and went and we still don’t have proper hoverboards but thanks to the advances in robotics, holograms and AI, as ...
Tech & Gadgets
3 years ago

In the after-match press conference, a shattered Kasparov vowed to rip Deep Blue to shreds in a rematch. But having won a massive PR boost and an $11.4bn rise in its market value, IBM decided to end the experiment and dismantle Deep Blue. "It's like going to the moon and returning home without looking around," wrote one chess commentator.

Chess fans will be engrossed by Kasparov's tale but the book deserves a far broader readership. The concluding chapters contain one of the most reasoned explanations of how humanity can benefit from working with its computational creations. In spite of their inferiority to machines, humans have continued to play chess for pleasure. Moreover, chess programs have helped accelerate the development of many young players and opened up new insights into the game.

Kasparov describes how he sensed a kind of inhuman intelligence emanating from Deep Blue, but he usefully distinguishes between different forms of intelligence. "Deep Blue was intelligent the way your programmable alarm clock is intelligent," he writes. "Not that losing to a $10 million alarm clock made me feel any better."

Since his retirement from chess, Kasparov has spent much time talking with computer scientists and artificial-intelligence experts. He firmly believes in the so-called Moravec paradox, which states that computers do well what humans do badly and vice versa, suggesting a useful complementarity.

Kasparov argues that humans are often fallible, finding patterns in randomness and correlations where none exist. Computers can help us be more objective and amplify our intelligence. Technological progress can never be stopped even if it should be better managed, he claims. Lamenting jobs lost to technology is little better than complaining that antibiotics put gravediggers out of work.

Just as in training for chess, self-discipline in education and brutal honesty about our weaknesses can help us better prepare for the world to come. But the indispensable ingredient for success will be designing the processes we use for managing computers, and only humans can do that. For this, he has come up with a formulation that has been called "Kasparov's Law":Weak human + machine + better process is superior to strong human + machine + inferior process.

"I remain an optimist if only because I've never found much advantage in the alternatives," he writes.