Alexa Chung will dress you now

The model/presenter/writer has tried on a score of different jobs. Will her new role as a fashion designer be the one that finally fits?

David Hockney, Lauren Bacall, Johnny Rotten..." Alexa Chung is rattling through the people who have inspired her first eponymous fashion line, items from which she is pulling off a rack as she speaks. "George Harrison walking across Abbey Road..." She motions towards a sky blue suit: "David Bowie."

Standing under a loaded sky in an industrial office complex in east London, 33-year-old Chung is wearing a striped mohair sweater of her own design, black Chelsea boots and white jeans. Her hair is set in the insouciant tumble of shoulder-grazing waves that has inspired a bazillion copycat cuts. Long-limbed and lanky, with a saucy laugh and a salty tongue, she is as thin as a reed and as familiar in person as the character we have come to know via our televisions, mobiles and magazines.

She shows off a long, tiered cotton dress in a lemony floral print. "I made this because the question I get asked more than any other is what to wear to a wedding," she says. "Because you want to look appropriate at a wedding, right? But you might also get laid. So..." she spins the dress around to reveal its low cutaway back. "Demure at the front. Sexy from behind."

Spring's it bag: the Birkin basket

Jane Birkin is rarely seen without one. Alexa Chung carries her essentials in a miniature Chanel version. But what is it about the basket bag that ...
Style
3 years ago

The womenswear collection is a two-way split: half of it is based on the masculine, tomboy silhouettes for which Chung herself has become recognised as a global fashion plate - striped dungarees, a navy trouser suit, boyish sweaters of the French-exchange student school. The other is more girlish: midi-length, lurex-knit dresses; a silver leather minidress with a dangling "A" zipper pull; a lilac-coloured latex pinafore with ruffled straps that barely grazes the buttocks. "I made that dress for Rihanna," says Chung. "I sent her one as well. I wanted to say, 'Thank you, for not being boring.' "

Things you won't find in the Alexa Chung collection? Anything made from a technical fabric: "I just don't like the feel of them, I have discovered. I like natural fabrics," she says. Or athleisurewear. "I'm too much of a time lord for athleisure: they didn't really make leggings like that in the 1960s."

Chung's first collection of clothing, shoes and jewellery includes some 145 pieces, and goes on sale next week from 55 retailers, among them Net-a-Porter, Selfridges, Colette and Opening Ceremony. The business is being financed by Peter Dubens, the co-founder and managing partner of Oakley Capital Private Equity who also backs the British designer Bella Freud, Pembroke VCT, and a group of private investors. It's being overseen by Edwin Bodson, Chung's 31-year-old managing director, who joined the company in April 2016 from Haider Ackermann in Antwerp. But, for a woman who has dominated the global conversation about what is fashionable for the past decade (you have her to thank for your one-time interest in Barbour jackets, Hunter wellies, high-waisted jeans, Converse hi-tops and Mulberry bags, for starters), and worked on a score of collaborations, the question begged is: why did she wait so long?

"I started a label because I wanted to have somewhere to go every day that was mine," Chung explains over a plate of new potatoes and cabbage in the café underneath the studio shortly after her show-and-tell. "I didn't want to wait for the phone to ring in order to get a job any more. I just felt a bit like I was floating too much."

Until now, Chung's career has been defined by a particularly millennial ambiguity. Born in 1983 to parents Gillian and Philip, she was raised in Hampshire and started working as a model, aged 15, when she was spotted by an agent at the Reading festival. She emerged in the public consciousness in 2006, as the sweetly sardonic presenter of T4's Popworld, and has since become one of the most visible figures of 21st-century cultural life. Chung's early success was shaped by her intuitive grasp of the new social media platforms - she has 2.7m Instagram followers, and 1.5m followers on Twitter. But while Chung's fame has grown exponentially with the rise of digital media, she has always been plagued by her lack of a proper job description.

"I went to therapy about it," she says of her nebulous career path. "I'm not joking. I think there was a point in the middle of all of this where it was a bit much to take... I was always being someone's muse for something... everyone would project what they wanted me to be, and I lost my way a bit. I was like: 'Wait, who am I?' And after a couple of years of going: 'Well, I used to be a TV presenter', and holding on to it because I think I was probably happiest doing that, designing just seemed like it would be fun. Or inevitable. It just seemed like what I was meant to do next..." she stops. "Although I still lie awake at night thinking of other career options in case the shit hits the fan."

Chung is a master of self-deprecation, it's part of her appeal. But launching a fashion label with little experience other than collaborating has been a daunting experience, not least because an army of Alexa Chung critics will be awaiting the opportunity to drip poison on her efforts (the downside of digital fame). "Definitely. Yes, definitely," she says. "But it's weird, confidence is a double-edged thing. I am obviously confident enough to try things without giving a shit about the consequences. But then when I'm doing it I'm like: 'I'm not qualified for this.' I need a lot of... not encouragement, but I need to hear someone else be like: 'It's fine, you can do it.' Because sometimes it feels like I can't."

Chung has taken to her new role with vigour, working with her team of 17 to bash out four collections of ready-to-wear clothes that will drop seasonally each year: she's currently working on summer 2018. But it's been hard.

A few looks from her ALEXACHUNG collection reveal: 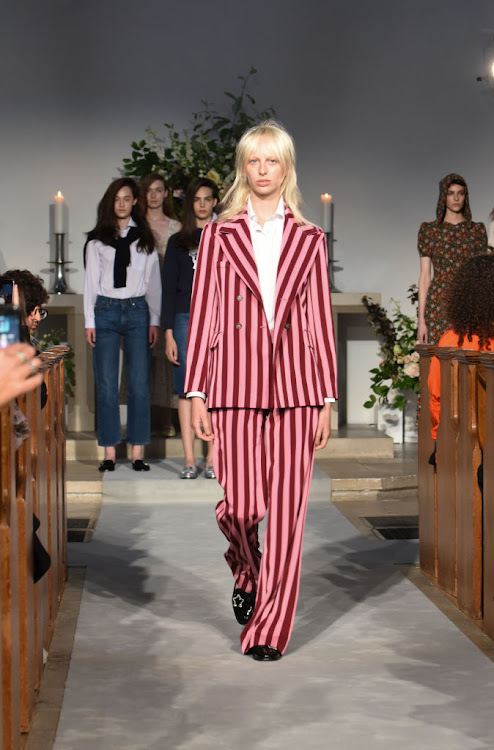 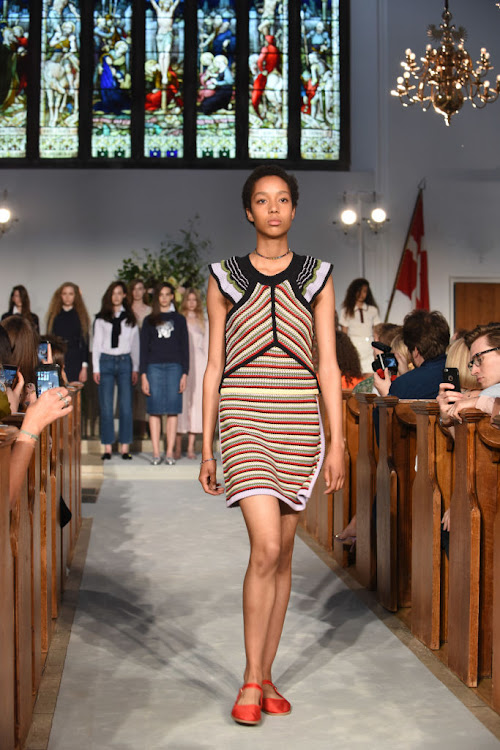 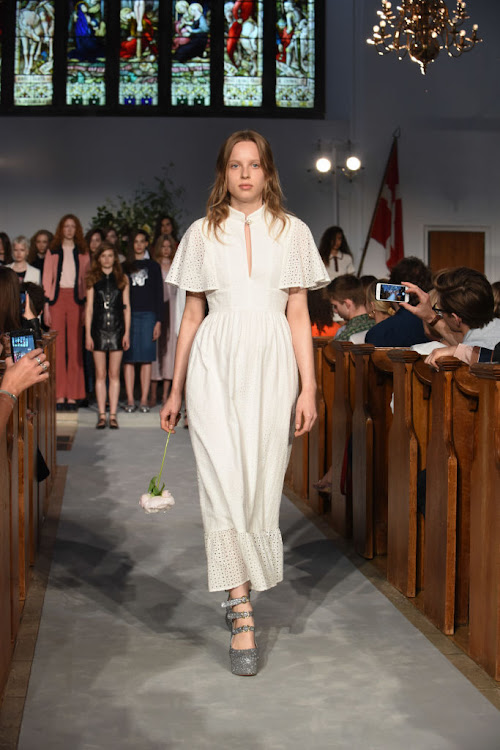 "At the beginning, we had this utopia in our minds and I was like: 'We're always going to leave the office at six and no one's going to stay late,' " she says. "That lasted for about a week." And she's had to learn how to lead a team. She's a decisive boss, with what she admits is a fleeting attention span. "I know that I can be direct. I'm sure I could deliver things in a more tactful way," she says of her dry, sarcastic humour, a style she learnt to temper while working in New York. "I'm sure I've upset people along the way. But I do try and thank them at the end of the day individually. Look them in their eyeballs. And say, 'Thank you.' "

The worst bit of doing a fashion label? "FTS - fabric to sketch - is my least favourite moment," she says. "It's where you've got your silhouettes and hopes and dreams up on a board and then you have to apply reality to it. Like finding the fabric that will do it in that colour, that you can afford, at the right price, that can go across four styles and is versatile. And will sew up correctly. And it's just like a quagmire of shite. It's really difficult. Especially when you haven't got the training in that background."

But, she's also been diligent in the collection's execution. As someone who has campaigned for ethical fashion in the past, Chung was insistent that her production line be transparent. "The first thing she said was she wanted a clean supply chain," says Bodson, of his earliest discussions with Chung. "She was like, 'I couldn't be living if I knew that things are not right.' And so my main point was to find the right factories, the right people and the quality that she wanted in the clothes, so that we could have the best possible price for those clothes."

Ethically produced "advanced contemporary" clothing isn't cheap. An Alexa Chung T-shirt will cost £75, and the dearest piece in the collection is a leather jacket that retails for £1,350. In a highly competitive market, Chung's collection will have to work hard to win its customers. "We were doing the prices with Alexa and I was like, 'Well, that dress is £480,' " says Bodson. "She was worried that that was a lot of money. And I was like: 'Well, yes, that's three metres of fabric in a non-synthetic fibre that has been sourced in Italy and made by people who are all above 18, who are paid 30 per cent above average salary in Portugal. So, unfortunately, that's the cost of that dress and I can't make a compromise on it.' Hopefully people will understand," he adds. "And if they don't, we'll be happy to open the books and explain why that price is that price."

Bodson and Chung make a good pair. "Honestly, she's teaching me as much as I hope we're learning together," he says. "She has an incredible instinct for what's coming up, and that is not something you can learn." He's also managed to beat her low boredom threshold. "We have a music system in the studio and I know which playlists relate to what she wants," he says. "And, sometimes, when we see the attention level go down, I'll grab my phone and choose something. And then she's like, 'Right.' And then it's back... Easy."

Escapist spaces: Take your living room on a trip ...

The best of Resort 2018 collections so far