Swapping food for stories: what we heard at the Put A Egg On It dinner

Tommy Werner had failed spectacularly in his attempt to make cream cheese frosting for a red velvet box cake while in Argentina. His mother posted him the box mixture while he was living there and even though he had no intention of making it (“because it’s lame”), his host was so enamored with the idea of it that he eventually gave in. After failing to secure cream cheese – due to overwrought badly translated Spanish explanations – he made a second trip to the corner store to try again but on his way back he was confronted by a man with knife asking for his money.

“I gave him a little bit of what I had (I still had some in my pocket) and he asked me if this was all I had. I said this it is and I have a cake baking in the oven right now, so can I be on my way? And he’s confused and taken aback and was like, excuse me? I say: I have a cake baking at home right now so not mess with me. He says, oh, ok then go and I go on my way.”

“If I Knew You Were Coming, I'd Have Baked A Cake” is a long name for a simple concept whereby New Yorker’s Sarah Keough and Tommy Werner travel the world and make dinner for people in exchange for their food stories such as the one above. It’s all in the name of their independent food magazine, Put A Egg On It; a green biannual collection of tales and recipes that investigates the way food makes connections between people.

Put A Egg On It
Image: Supplied

Now going into its tenth year, Put A Egg On It made its way down to Cape Town for the Visa Food Studio conference, a new extension to the ever-popular Visa Street Food Festival. There they taught us that memories are as paramount to food as flavour, if not more so, and went on to entice conference-goers with anecdotes from previous installations where they cooked in a gallery in Japan and for children in New Orleans. The next night they treated 60 Capetonians (and this here Joburger) to a four-course meal in defunct pool hall in Woodstock.

Since you weren’t lucky enough to partake in ceviche with ginger, lime, chilli, fresh tortilla chips and avo mayo; pulled lamb with vinegary greens, brown rice salad with baby turnips; fennel and oranges; a lemon olive oil pound cake; and the all important soy sauce cured egg; we offer you three stories from the night instead. 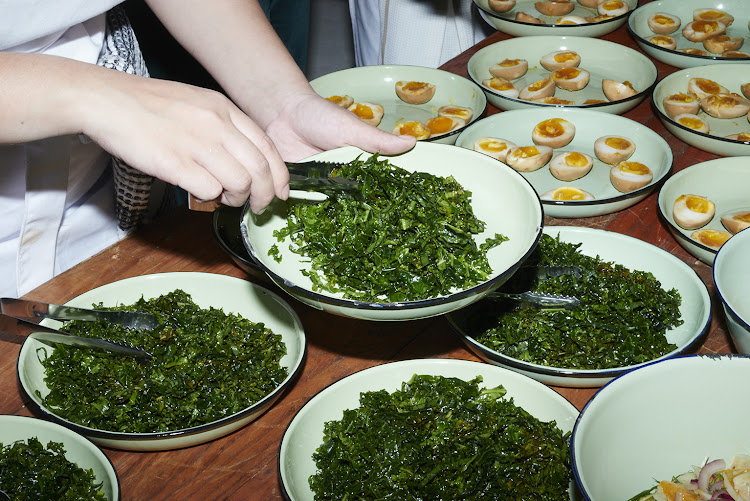 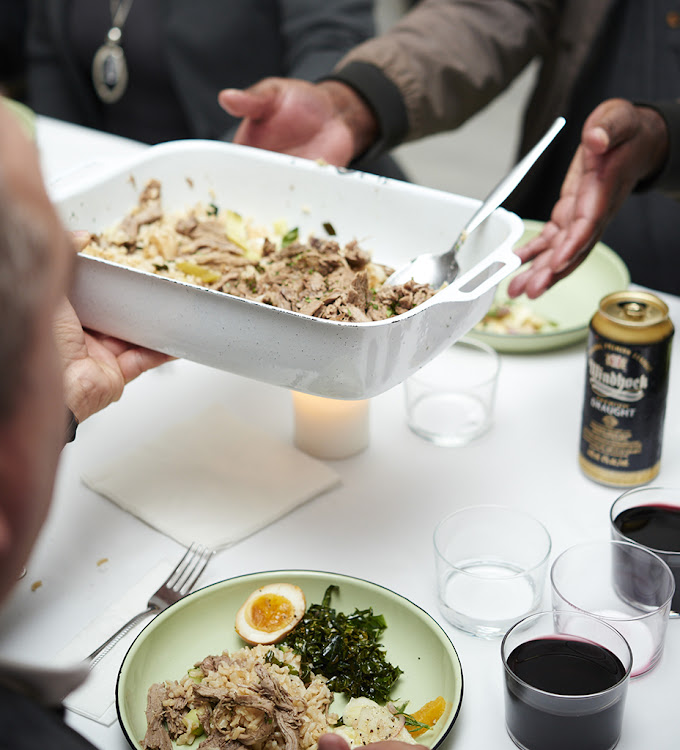 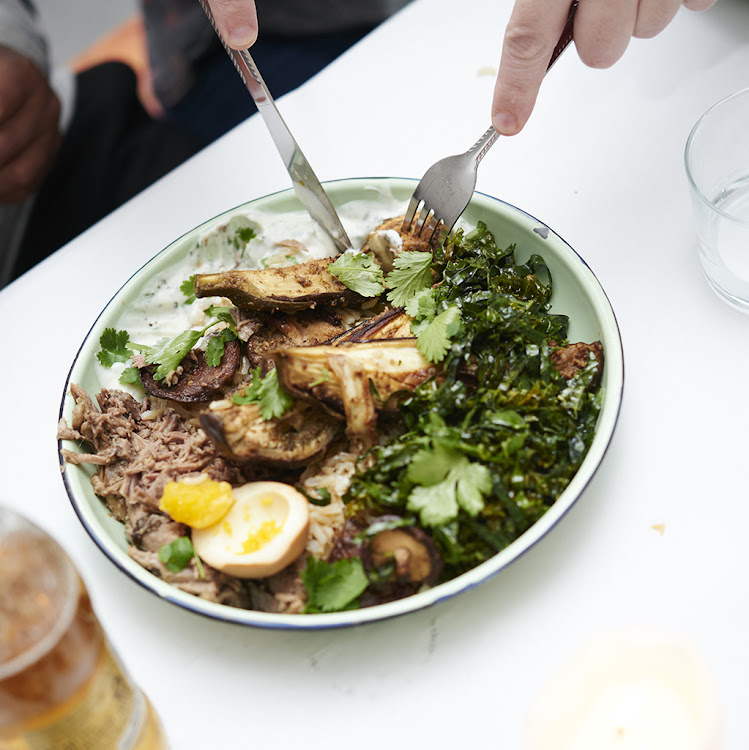 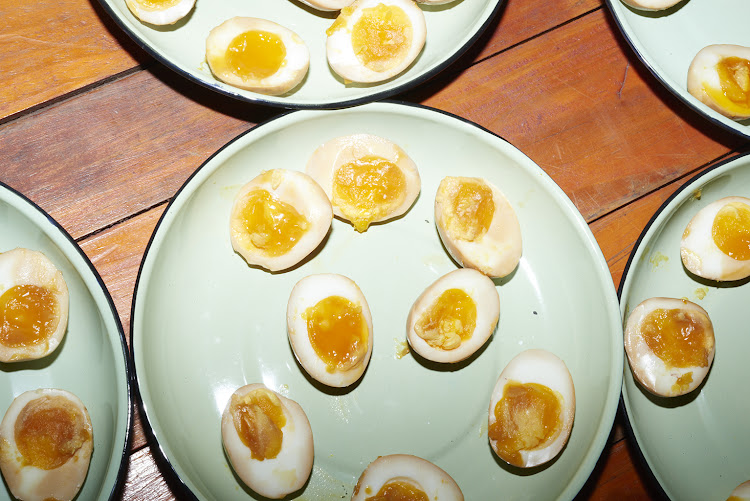 “My grandmother is a bit of a prankster. She always used to make us homemade tumbles – those chocolate coated raisins – and then every now and again she would put a bokdrol in instead of a raisin. Like, an actual buck dropping.

We eventually got smart and then realized that they were the bigger ones and avoided them. But she outsmarted us again by coating two raisins together so that they all looked the same.

You would eat the bokdrol and she would laugh and laugh and it would be the best day of her life.”

“I only just started getting into eating spices and curries recently, I never ate it before. Which made things interesting when I was a bit younger and I went to India with my dad and my sister.

We were in the south in this tiny little town where there is nothing to do except look at water buffalo and go to the underwear market but I didn’t even get to do either. My dad imports fabric so he was there to meet cotton people, and they were so worried about our safety – because apparently there was this gang in this small town – we weren’t allowed to go anywhere by ourselves. They drove us to American restaurants the whole time. All my dad and my sister wanted was to eat Indian food but they would only take us to pizza places and fried chicken places. I was fine with this.

But then one day we got away from everyone and we got to do our own thing. We went to a restaurant on a little island for lunch and my dad and sister got curries. There was nothing I wanted so I just said I would have some bread. They had naan bread on the menu and I thought I’m could totally be cool with that.

But this old man was so sweet, instead of bringing me naan bread he actually made me a little bread and butter sandwich out of white bread cut in little triangles and he even cut the crusts off. But when it got to me there were black fingerprints on the white bread because everything was so dirty. He was so well meaning but he had really dirty hands and little black marks were all over the white bread.

I didn’t want to be rude, I was already being difficult not eating their food – which I acknowledge – so I decided that I had to eat this bread. So I tore around the fingerprints and then I actually ate the white bread – that wasn’t black – and then I took the rest and scrunched it up really small and put it in my pocket so he didn’t know I didn’t eat it.”

“When I was growing up I loved dinosaurs so very much, even before Jurassic Park was a thing. And I remember one day my grandmother told me that a dinosaur man had moved up the road from her. It turns out that the guy was an archeologist and indeed had dinosaur eggs and bones in his house. But that was not even the most interesting thing about him.

He was an agoraphobic astronomer who had been a spy during the border war and was trained by Russians to do fantastical and terrible things. He grew up in a hotel as a kid where he trained as a chef and what’s more he was an organic farmer before organic farming was a thing. To the point that he even taught Margaret Roberts a thing or two.

Anyway, as a kid my mother would throw me the most ridiculous kids’ parties. And my favourite party by far was the medieval themed birthday on this guy’s farm where he was King Richard. We could be knighted throughout the day when we completed quests (think Lady Lilly of the Onion) all the while in search for the Holy Grail that he had hidden in the scarecrow in his organic vegetable patch.

It all culminated in a medieval feast where no manners or pieces of cutlery were allowed. You should have seen these kids faces when they were coerced to be as rude as they liked and eat with their fingers with wild abandon. Naturally it all ended in a massive food fight, just like in the movies, hand sized cream pies in faces et al. He is a very big reason why I love food – and eating with my fingers – to this day.”

For more stories like this you can get your hands on a copy of Put A Egg On It this Sunday at the Johannesburg Visa Street Food Festival happening at the common ground in Maboneng from 10am to 4pm.

This chef exudes love and wholesomeness, which can also be found in her unfettered hospitality and every mouthful you'll enjoy at her Bree Street ...
Voices
3 years ago

A recent addition to the Sea Point scene, Jarryd’s espresso bar and eatery has quickly established itself as a go-to breakfast spot. Having ...
Navigator
3 years ago

The best of the brunch: we've got you covered

Cape Town's top spots for a lavish late start
Navigator
2 years ago
© Wanted 2020 - If you would like to reproduce this article please email us.