First taste: a visit to Zioux 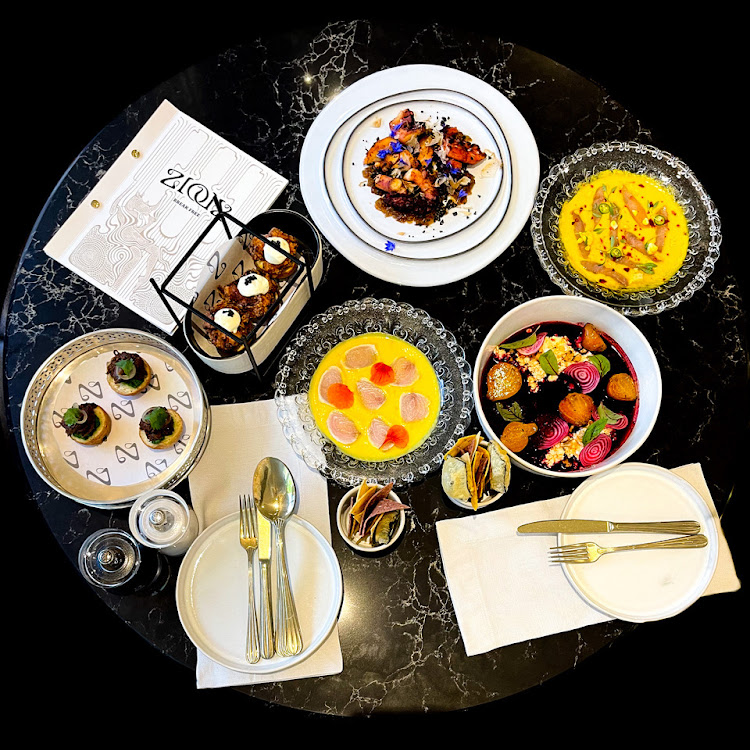 First things first, it’s Zioux pronounced Zoo (not Zeus or Zeeoh or my personal favourite so far, Zee-oucks) and it’s the third and perhaps most extravagant endeavour to date by the dynamic duo of award-winning celebrity chef David Higgs and businessman-turned-restaurateur Gary Kyriacou and their Marble Group.

The celebrated team — who have once again partnered with GRID to develop the brand identity, name, look and feel — describe the concept as a play on both the feeling of being caged and breaking free, as well as a cheeky nod to the urban jungle of Joburg, and us creatures who inhabit it. It’s about creating a space to indulge in excess and opulence, glamour and sophistication — somewhere to let down your hair and unleash your wild side. The stunning new champagne bar and cocktail lounge, so far, proving to be the perfect place for this vision to play out.

Design is once again under the eye of Marble group interior designer Irene Kyriacou, and as with Marble and Saint, it is an incredibly impressive aspect of the undertaking. The one-time coffee shop is transformed into a dark-wood, gilded wonderland that is reminiscent of London’s private members’ clubs.

The bar itself, composed of the most gorgeous backlit onyx marble, is the centre piece — a glowing shrine to the bottles it holds, lit up by 16 of the most magnificent oversized light shades which hang from above — created by designer Thabisa Mjo.

Celebrated local artists and longtime Marble group collaborators have been brought on board for Zioux too. 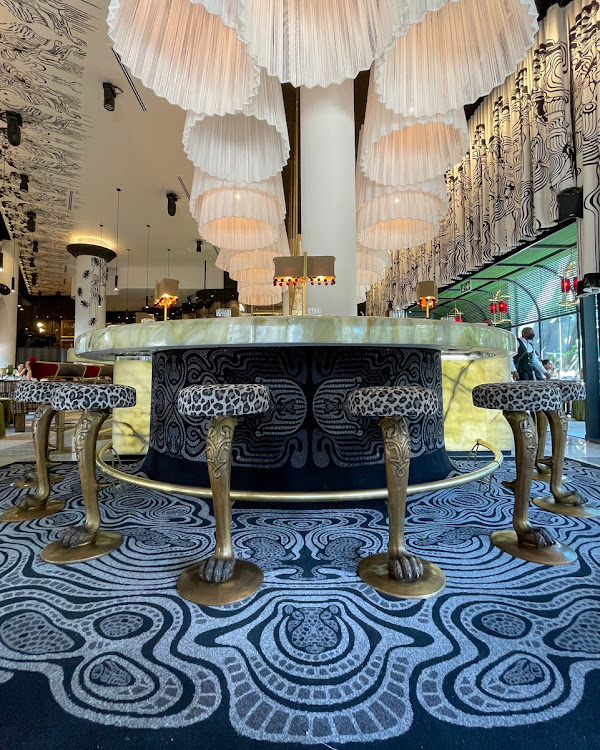 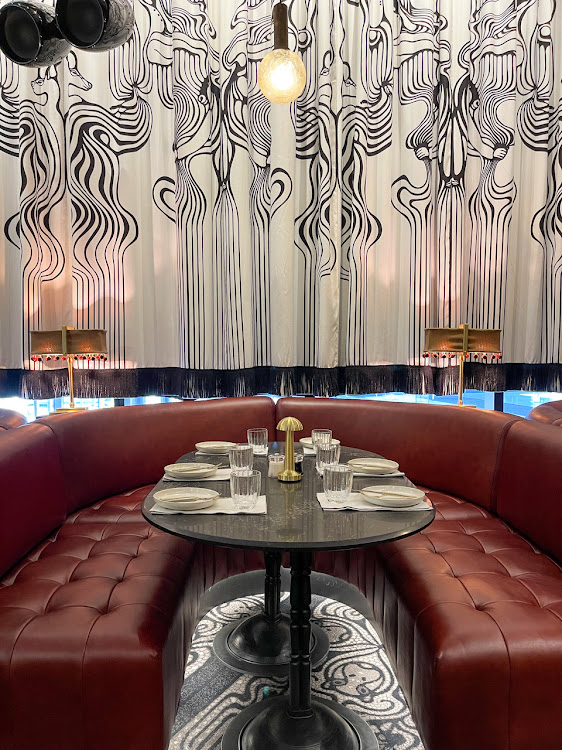 Illustrator Sarita Immelmann (of GRID) has done a stellar job with the brand assets, creating line drawings featuring a menagerie of animals from cheetah, ostrich and hippo to giraffe and rhino,  which are featured everywhere from the curtains and carpets to the ceilings, menus and barmen’s jackets.

Artist Krisjan Rossouw has outdone himself with the grand paintings which line the back walls. A host of animals decked out in their finest garb is perhaps the cleverest and most eye catching element of the space — think a buffalo in a Victorian ball gown, a male kudu in a flouncy cocktail dress and a zebra seemingly in striped military wear, it’s the Zoo in Zioux done so right.

Rounding up the trio of familiar artists is the multitalented, multi-medium creative, Damian Grivas, who has not only hand painted Immelmann’s design on the ceiling, but also created the most stunning array of animal leg bar stools which would be so kitsch were they not in such an elaborate setting.

The food is where Zioux really shines. Initially pitched as somewhat Asian, somewhat raw bar, somewhat gold-leafed burgers and caviar (they all still feature in some form), it seems to find its footing in Latin American cuisine merged with local touch points — in particular strong Mexican and Peruvian flavours come across in a plethora of the small plates available.

It’s an offering Higgs is clearly excited about. The chef excitedly talks of the specific chillies used in the ceviche (a highlight on the menu and served in numerous iterations), the gorgeous Jersey beef tartare served with a nasturtium pesto, and the incredibly clever beetroot salad — loosely inspired by the traditional Mexican dish, aguachile and its use of citrus curing — served with ricotta, feta and walnuts. His newfound passion clearly has seen him diving deep into central and Southern American cuisines.

In addition to the small plates and bites there’s also a bigger plate selection for those looking for something more substantial to accompany their libations — be it a baby chicken chipotle, pan fried rib-eye with a five chilli jus, or the Zioux burger with curried hollandaise and truffle.

Last, but certainly not least, is the shellfish bar — the perfect place to perch with a glass of champagne and indulge in some glorious ocean fare — including oysters available with three decadent accoutrement options or the steamed and cured shellfish tower (which serves two).

Assisting Higgs and at the helm of the kitchen are head chefs Michael van Rooyen — who returns to the group where he first helped put Marble squarely on the map — and Moses Moloi who moved across from Cape Town’s critically acclaimed Fyn. 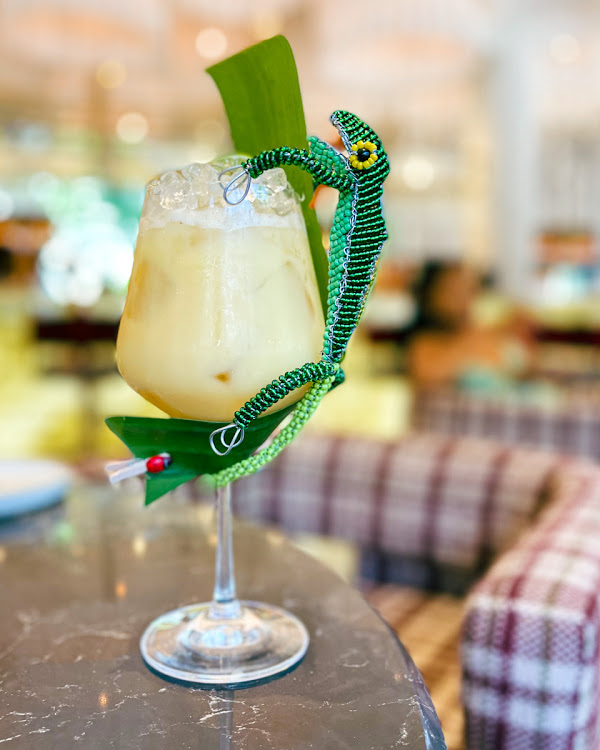 Marble group mixologist George Hunter has created an impressive array of inspired cocktails. The most instagramable is perhaps the signature Aqua de Mee-Hee-Ko which is served with a beaded chameleon wrapped around the glass — and is a refreshingly tasty concoction of tequila, lime, horchata, mango and habanero with a dash of peach bitters. In addition, highlighting the importance of cocktails as part of Zioux’s offering, there’s a food and drinks pairing option which shows the likes of a caper martini with raw salmon and a “fruity flamingo” paired with a Katsu Sando.

Overall,  Zioux (again, pronounced Zoo) promises to be an enormous amount of fun, and then some. This new establishment not only hitting the mark with its drinks offering, but also with its big-flavour, vibrant small plates, magnificent décor and the level of service we’ve come to expect from the group.

This is where you should have a picnic this Cape summer

The key to cooking hong shao dishes is to control the heat — and that requires your full attention
Food & Drink
7 months ago
Next Article
© Wanted 2022 - If you would like to reproduce this article please email us.