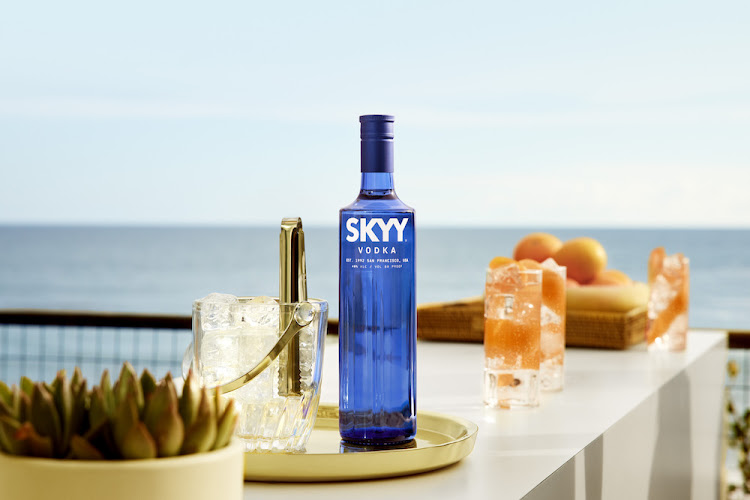 The new twist to Skyy Vodka is intended to enhance the mouthfeel and fresh taste of the classic vodka & soda cocktail.
Image: Supplied/Skyy Vodka

If Martin Riese told you he is a water sommelier, you’d be forgiven for raising a quizzical eyebrow. While most people are familiar with the traditional meaning of the word sommelier, to refer to an expert in wine and in particular the pairing of wine with food, the concept of a water sommelier is something altogether more recent.

The principal though is the same. A water sommelier is an expert in all things water, its properties, and the elements that affect it. Riese has been educating others about this important natural resource for over a decade and his knowledge of mineral water has led to appearances on TV and radio programmes across the world. In fact, he may be the world’s most recognised water sommelier. Unsurprising then that Skyy Vodka brought him in as one of a diverse team of experts tasked with rebooting their liquid as part of the iconic brand’s global relaunch.

Working alongside a chemist and an expert bartender, Riese was tasked with evolving the premium liquid into a better partner for soda – in line with studies which showed a new generation of vodka drinkers who wanted a lighter, more fresh-tasting drink, such as the vodka and soda. Skyy already had a reputation for its cleaner, purer vodka thanks to its quadruple distilled, triple filtration production process which yielded a smoother-tasting vodka. In combination with the grains used to make Skyy’s award-winning liquid, the trio turned to the water component to discover the superior twist that minerals could bring to the vodka.

How to make vodka and soda like a pro

“Everything has been altered by water and minerality in water is what your body wants,” says Riese. “The San Francisco Bay area is rich in minerality. Skyy Vodka takes this terroir and puts it into this amazing new liquid.” Sodium, calcium and magnesium have been harvested from the Pacific and added to the water used to make the vodka, which is then filtered through California limestone. Potassium and additional calcium are also added. More than 35 liquid samples were created and evaluated as part of the process, which Skyy says has yielded a nose that’s fresh and clean, with a hint of fruit and toasted grain.

Apart from being completely authentic to its roots, the San Francisco-based distiller believes the addition of local minerals results in the perfect base for a better tasting vodka and soda which is clean and smooth on the palate. The new twist to Skyy Vodka is intended to enhance the mouthfeel and fresh taste of the classic cocktail; but ultimately elevates any cocktail experience.

“We really came up with something very special,” says Riese. “Now in cocktails, you will really see the difference.” Skyy has developed a signature pour for its new liquid which includes a grapefruit twist, a citrus addition that brings out flavours you wouldn’t normally experience in your average vodka and soda.

The company’s rebooted vodka has already won three gold awards from prestigious institutes and in spirit competitions – a testament to the distinct quality of the reformulated liquid and the hard work by the collective brains of the experts which went into meticulously perfecting it.

As a passionate water-lover and co-founder of the Fine Water Academy, Riese trains and certifies future experts on the properties and effects of minerals in water – expertise that allowed him to meet Skyy’s aspirations perfectly in this instance. He may be the first water sommelier you’ve ever heard of, but with the increasing importance of water as a resource on the planet, he certainly won’t be the last.

You’ll find the refreshed Skyy Vodka in its new modern packaging, also inspired by San Francisco, but with the iconic blue bottle lightened to a more natural tone and featuring ridges and ripples to evoke the Pacific Ocean.

Warning: you may become a water snob after reading…
Food & Drink
1 year ago

* This article was paid for by Skyy Vodka.

Not for sale to persons under the age of 18. Drink responsibly.

Turning the tables at Emazulwini Restaurant