A go-to spot for a special lunch or dinner, the Luke Dale Roberts eatery’s brunches are almost a secret of sorts kept by those in the know 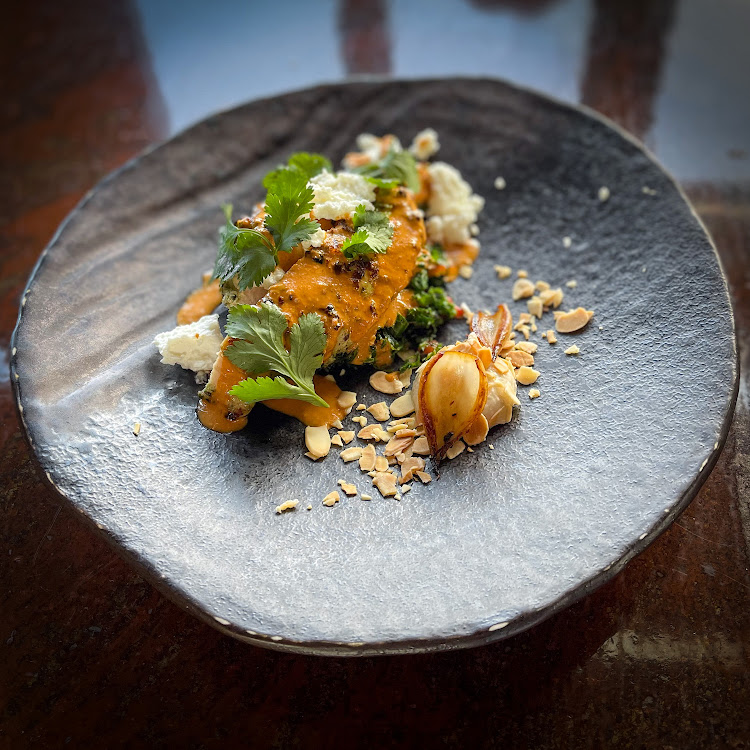 Brunch, is so much more than merely a portmanteau, it’s a glorious merging of meal times — greater than the sum of its parts — which truly allows for the best of both a hearty breakfast and a decadent lunch.

Now, I’m obviously not talking about a toasted sandwich for breakfast or a granola bowl for lunch at about 11am. No, I’m talking about grand, over-the-top brunches, those that start with a Bloody Mary, feature numerous courses and demand more hours spent indulging about a table than should be considered decent to do so — were it not for the fact that it is, of course, brunch.

So, it was with a spring in my step and the rest of the day booked off on a particularly dreary Sunday morning, that I ascended within the glass elevator to the sixth floor of Woodstock’s Old Biscuit Mill to the famed The Potluck Club. For it’s here, with 360° views of the city, where one such brunch is served.

The Peeping Tom’s tongue is firmly in its cheek

The Luke Dale Roberts eatery, with its modern, globally-inspired menu and casual cool demeanour, has been a firm favourite of both locals and tourists alike since it opened its doors. And while it has often been the go-to spot for a special lunch or dinner — and rightly so — its brunches have seemingly been kept on the down low — almost a secret of sorts kept by and between those in the know.

For every Sunday, head chef Jason Kosmos and his team swap out the usual small-plate menu for a stellar five-course, ten-dish brunch service — complete with a build your own Bloody Mary bar and bottomless bubbly (Graham Beck MCC) — optional but advised.

It’s all the big, bold and unashamedly flavourful cooking one expects from The Potluck Club. The chef's affinity Asian-inspired cooking weaving its way through this menu as it does with the usual one. 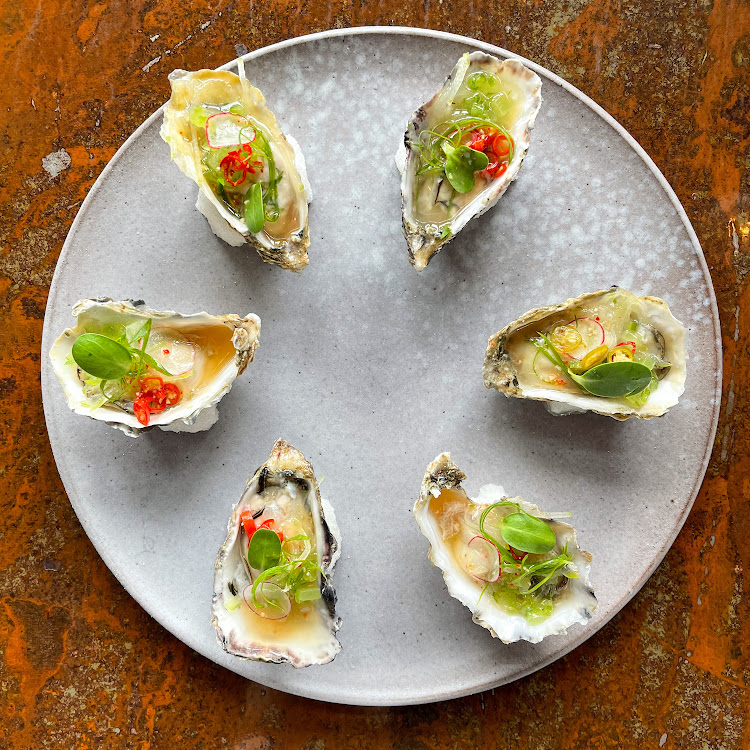 I start with a welcome cocktail, a passion fruit and sake libation, its arrival coinciding with the first course of nuoc cham oysters. The sweet, sour, salty, savoury and slightly spicy dressing and accoutrements , a wonderful addition to the plump yet delicate briny oysters — whetting the palate for what’s to come.

Next up are the smoked snoek crumpets, sweetbread ssam and a highlight, the luxurious little twist on a benedict (of sorts), a toasted brioche square-topped with a mushroom duxelle and quail egg before being generously covered in a glorious hollandaise sauce and garnished with slithers of fresh truffle. 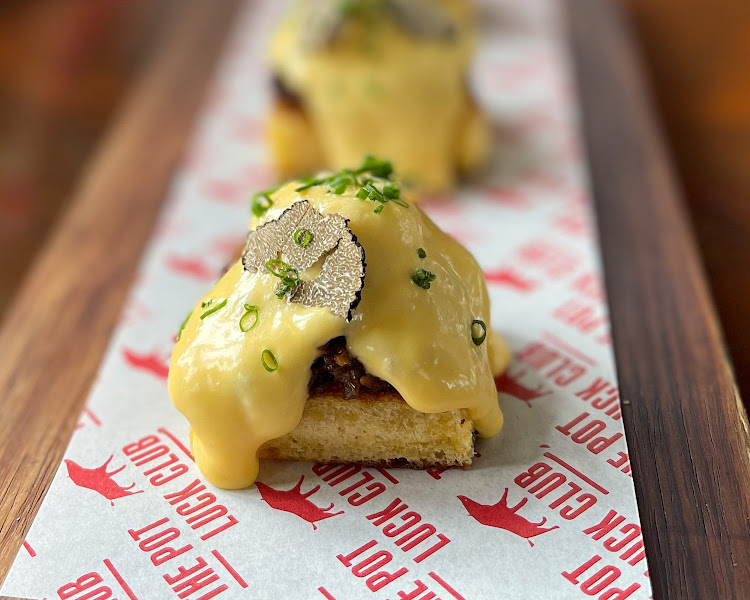 The sweetbreads deserve mention too — the likes of which you’d only expect to find at a Dale Roberts establishment — the golden, soft on the inside, crispy-on-the-outside morsels cooked to perfection, drizzled with a tofu emulsion, and complemented by a barbecue tamarind sambal and the fresh greens with which it is all to be scooped up and enjoyed.

The signature mini Arnold Bennett is then served, unfortunately missing the mark on this visit, the fluffy haddock omelette having separated upon cooking. However the creamy, golden-on-top hollandaise and parmesan topping was as gloriously decadent as ever. 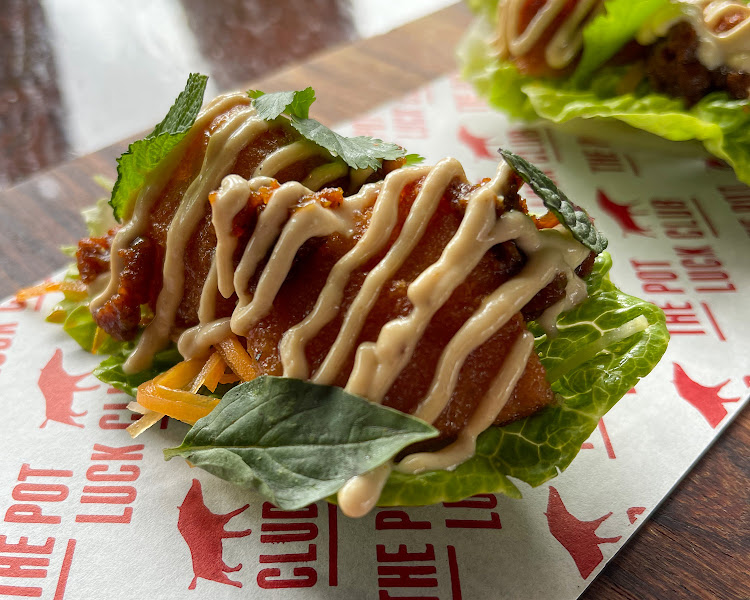 What follows are two superb lunch dishes, the first a duck tartlet, served with their braaied green salad, and another Pot Luck signature, this time their peri-peri chicken. It’s a cracker of a dish, the peri-peri sauce balancing heat with heaps of flavour. The creamy feta, almonds and onion further elevating the humble chicken, contrasting in both taste and textures. 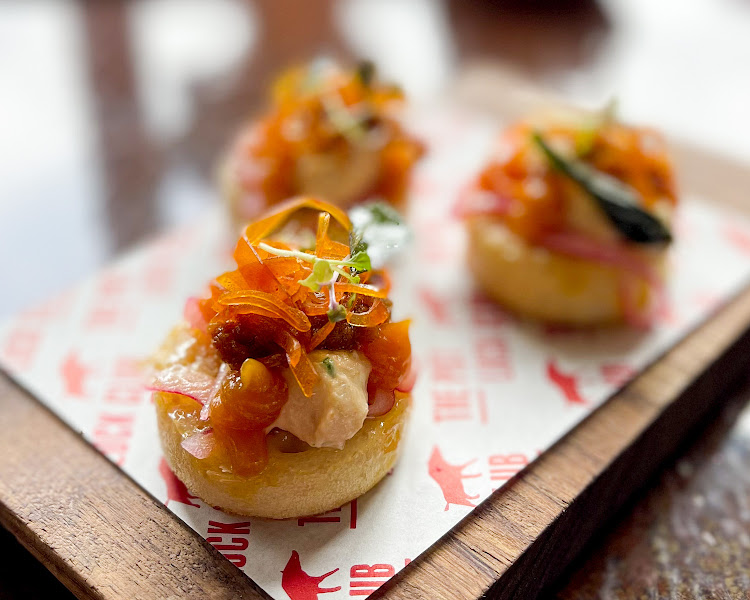 As the day wore on, the bubbles flowed and the meal wound its way to dessert. This visit taking shape in Tonka bean caneles and a dish titled “milk, honey and tea” of a lavender panna cotta, tea ice cream and milk espuma served with a financier — it’s a dish that is perhaps stronger in concept than execution. But its lightness and subtlety of flavours are well suited to the end of such an extravagant meal. 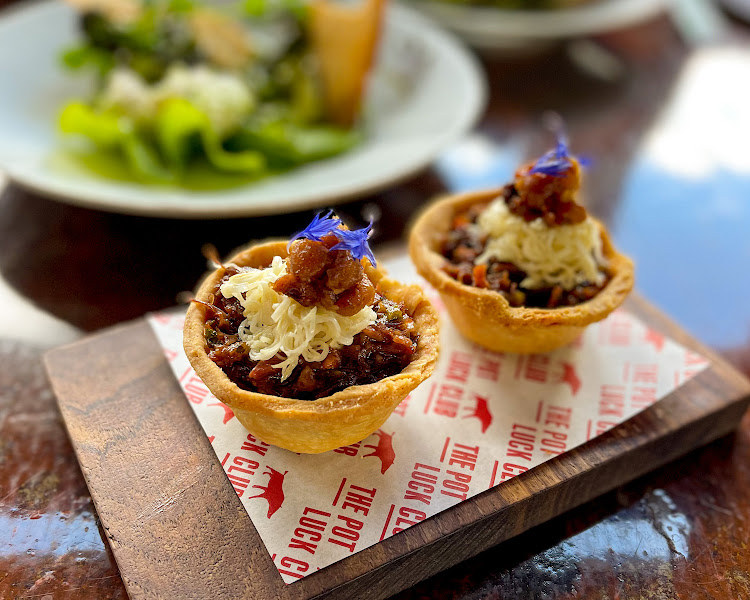 A final bite of a canele together with a double espresso and I could think of few other ways I’d rather have spent a Sunday. Fabulous food, top-notch service and company to match — it’s brunch done so well.

The Potluck Club brunch is served every Sunday

Wolfgat is, officially, the best restaurant in Africa

Chef Monche Muller’s menu is separated into bread and dips, small-plates and dessert, and guests are encouraged to share with the table
Food & Drink
8 months ago

The two establishments place within the extended top 100 list ahead of the awards on October 5
Food & Drink
9 months ago
Next Article
© Wanted 2022 - If you would like to reproduce this article please email us.