Whether you’re catering a last supper or a luxe one, Steve Steinfeld lists some of the best locally available treats for your table 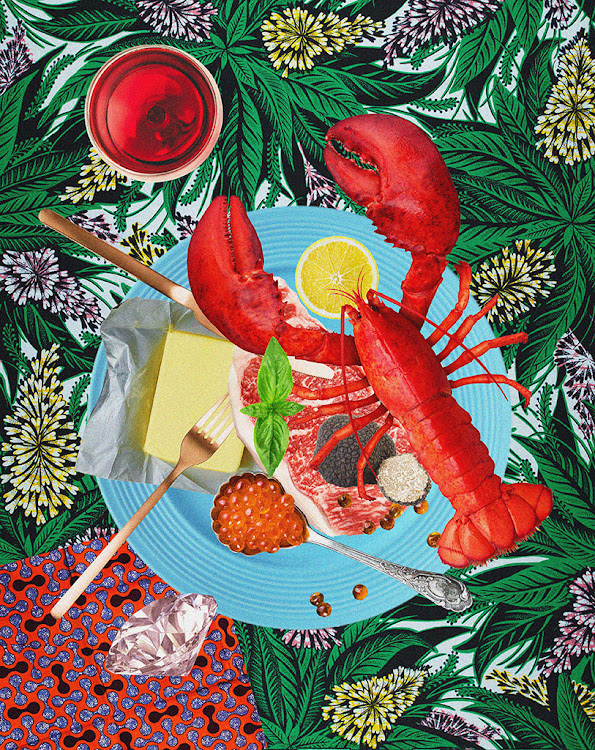 British restaurant reviewer Jay Rayner is my guru. He is the apotheosis of all that is great and smart in the world of food writing. For this morsel of a story, I’ve taken my cue from his wonderful book My Last Supper: One Meal, a Lifetime in the Making. It is a brilliant degustation-cum-memoir that delves into details of his food-centric life while he attempts to answer the question, “What would my last meal be?”

Along the way, he revisits his most memorable people, produce, travels, lessons, and flavours in order to create an eight-course menu which encapsulates his life so far, while simultaneously reflecting on our human and very complex relationship with food.

Think of this as micro version, Wanted style. Where suppers are concerned, Rayner does “last”. We do “luxe”. So here’s what I’d pile onto my gilded plate, given the chance. It is a glimpse at South African producers, artisans, and eateries who are offering up the finest in simple luxuries and extravagant eats.

Butter is a truly wonderful thing. It’s that glorious fat that makes everything from a piece of toast to roast chicken just taste better. Doing what I do, I’ve had the pleasure of eating my fair share of butter. I’ve had it virgin and I’ve had it whipped, I’ve had it flavoured with seaweed, hay, truffle, anchovy, cabbage, wine, and so much more. But for this list, I wanted a classic salted butter — the type you can lather onto chunks of bread and enjoy as is, no additional flavours necessary.

Cream of The Crop is that type of butter.

This cultured butter is made in Cape Town by Maria van Zyl, who learnt the art from small producers in the Alps. It’s cultured, which means it’s a great source of probiotics, in addition to having lower lactose than the regular “uncultured” variety. But this list is not about health, this list is about taste. The real beauty of cultured butter is that it’s more flavourful. It’s deep, rich and, well, more buttery than you usually come across — also a result of its high fat content. It’s the type of butter that momentarily clings to your palate before melting, leaving a slightly cheesy aftertaste.

Cream of the Crop is produced in very small batches from cream sourced from a grass-fed Jersey cattle herd in Robertson. Van Zyl ferments her own culture, which is then used to make the butter, giving it its truly unique taste. Once churned, it’s left in buttermilk, imbuing further flavour, before the salt is added. The final step is hand pressing into gorgeous floral moulds — the dearest one, featuring three flowers, was gifted to van Zyl from the butter maker who taught her the craft.

If you ask any chef worth their salt who to speak to about cheese — especially goat’s cheese — you’re likely to be sent in the direction of Pépé Charlot. His name is actually Gerald Tanesse but to the industry he’s fondly known as Pépé. The name is that of his business and translates from French as “Grandfather Charles” — the man who taught Tanesse all about the fine appreciation of goat’s cheese.

The 250g block Image by @etherealboundjournal

Arriving in South Africa, Pépé was disheartened (to say the least) by the goat’s cheese available, and searched high and low before finding a cheesemaker who was up to scratch. In 2010 he took over the cheesery and, after one weekend of on-the-job learning and countless hours watching YouTube videos, he was soon producing some of the best goat’s cheese in South Africa, all from the kitchen of his garden cottage. Now set up in Kommetjie, he makes a variety of cheeses ranging from soft to hard; all magnificent iterations of their traditional French counterparts. Don’t expect any of that “I’ve just licked a goat” flavour found in so many other local goat’s milk cheeses — these are the real deal.

Renowned chef Luke Dale Roberts has introduced “Pépé’s Cheese Chariot” as the final course on the menu of his recently launched The Test Kitchen Origins. For this, Dale Roberts required more than just the goat’s milk cheese. This request was the catalyst that has led the cheesemaker to his dream job of being an affineur. This is the very French profession of maturing cheese, which now sees him sourcing different cheeses from around the country and maturing, resurrecting, and preparing them for sale at their best potential.

Eben Sadie may be known as one of South Africa’s finest winemakers, but it’s actually his olive oil that makes this list. The just-released, small-batch olive oil originates from the olive trees planted around his famed winery and cellar. This year was a particularly good olive harvest, so he decided to go ahead and press the olives for bottling, aptly naming it Uit Die Tuin. It’s a super-limited release with only 300 bottles made available for sale. I could rattle on about how it tastes, but Sadie puts it best: “The oil is epic this year,” and I’m not one to disagree.

When I was growing up, we often had a jar of what we colloquially called caviar in the fridge. A Provita topped with cream cheese and finished with a dollop of the tiny black beads always went down a treat. Technically, it wasn’t caviar but rather lumpfish roe. Nonetheless, by some virtue of fish-egg-impostor syndrome, it’s how my taste for caviar began.

My first taste of real caviar was at The Restaurant at Waterkloof, and so it’s this caviar that’s making the list. It was a spectacularly simple dish, a delicate Parmesan custard with a “floating island” of egg-white espuma topped with the iridescent pearls of Imperial Heritage Oscietra. This was nothing like the “caviar” I remembered eating as a child — the colour was almost pewter-like with a glorious sheen, they were bigger and the flavours deeper and much more complex; lightly salted, these pearls were rich and creamy, tiny little bursts of umami and the slight aftertaste of the ocean. It’s a moment I won’t forget and a luxury that just tastes like more.

Imperial Heritage caviar comes from sustainably farmed sturgeons that are grown in natural spring water (rumoured to be from the very same springs from which San Pellegrino is bottled), resulting in a pure and clean roe. The roe is harvested and prepared according to a traditional Russian salting technique called “malossol”, after which it is immediately packaged and thus optimally preserved.

Anthonij Rupert Wyne proudly holds the title of the first wine estate in South Africa to both cultivate and produce black Perigord truffles, and rightly so. The project has been years in the making, with the oak-tree roots first inoculated with truffle spores and planted on their cool-climate farm Altima Estate back in 2010. However, it would be seven years before estate truffle hunter Hanene van Dyk (having honed her craft in Piedmont, Italy), together with her pack of Lagotto Romagnolo dogs, would first unearth fully grown truffles.

Last year saw the first public launch of their truffle experiences, which included four-course truffle lunches and, for those with a real passion for the fancy fungi, a visit to the farm itself for an exclusive tour and truffle hunting experience. While these have not taken place this year, the team instead has been cooking up a host of truffle-based products that are available to purchase from the estate — think the likes of truffle salt, truffle butter, and truffle salami.

The dynamic duo of businessman Gary Kyriacou and celebrity chef David Higgs continue to treat visitors to their Joburg hotspots with world-class culinary experiences. While last year saw the arrival of a premium, international meat offering to Marble, this year sees the arrival of lobster to Saint. In an effort to supplement the catch of the local West Coast rock lobster (commonly called crayfish) with something more sustainable, the two were inspired by a trip to the US and the shellfish they ate there — namely Atlantic lobsters. You know, the kind you see in movies. They’ll fill a plate and are deep red with big claws, to be cracked open and enjoyed with reckless abandon — a bib may be required for the more highly strung among us. The team has followed all protocols, both locally and abroad, to ensure that the lobsters meet all required regulations and quotas.

Eight food trends set to sweep the gastronomic industry in 2020

Old pros and new kitchen cowboys will love this tool, guaranteed to upgrade you to masterchef level
Food & Drink
1 year ago

Join a pair of hunting hounds as they sniff out a rare delicacy, black truffles
Food & Drink
2 years ago