Hunting for 'black diamonds' with a pack of Lagotto Romagnolo dogs at Altima vineyard farm is both blissful and rewarding, writes Allison Foat 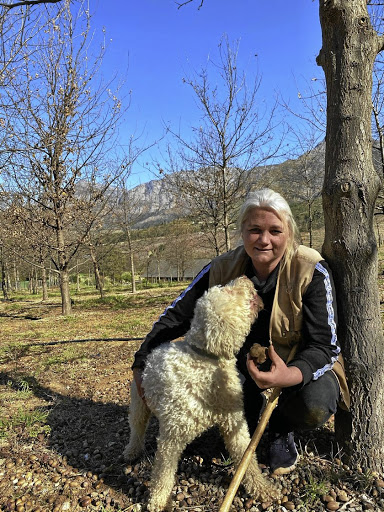 Hanene van Dyk and Dick, one of her Lagotto Romagnolo pack, in the truffle orchard at Altima.
Image: Allison Foat

Truffle harvesting season in South Africa has wrapped and Hanene van Dyk is content. It's been a good year at Altima, the vineyard farm belonging to Anthonij Rupert Wyne that has been producing Black Périgords since 2015, five years after the first inoculated oaks were planted on the slopes of the Villiersdorp highlands.

Fetching an average of R15 per gram in SA, according to Woodford Truffles' Paul Miros, the eye-wateringly expensive delicacy, also known as the "black diamond", is one of the world's most coveted culinary assets.

Both locally and internationally, the Périgord market is consistently bullish and in SA, where they're grown in favourable terroirs of the Western Cape, KwaZulu-Natal and Mpumalanga, demand is high.

To watch the energetic truffle hunter work the orchards with her specialist Lagotto Romagnolo dogs is to observe a woman living her best life, at one with nature and beast.

Spotlight-shy, Hanene is quick to praise the team she works with, including her farm manager husband, Coenie, who among other things is responsible for the tree pruning to prevent canopy overlap and ensure the fussy fungi get their requisite sunlight.

Second to the earth and the way the elements marvellously conspire to conjure these intoxicating edibles, it's her beloved canines she loves to chat about, her "co-workers" on each truffle quest. On a work-related trip to Piedmont in Italy, Hanene bought a pair of three-year-old Lagottos — Dick and Cara — and today her Altima pack numbers five.

Join a pair of hunting hounds as they sniff out a rare delicacy, black truffles
Food & Drink
3 years ago

Of their training, she explains the use of play, the gentle approach and positive reinforcement. First she establishes the bond and thereafter tackles obedience. The Lagotto Romagnolo breed is intelligent; an enthusiastic retriever with a great disposition, which makes the process a total pleasure.

"We start with fetch," says Hanene. "I throw a tennis ball, they bring it back and get a treat. Then I put truffle oil on different objects and we play hide and seek. After that the dogs graduate to sniffing out actual grated truffle sprinkled in random spots on the ground and they quickly learn to recognise the truffle smell."

Pups mimic their parents, which makes the training that much easier. Hanene instructs the dogs in Italian and Afrikaans, although she finds some need no verbal commands. "They instinctively know what to do. It's like it's in their DNA; sometimes I know to stay silent and just allow them to do their thing. When we are foraging I'm in their paws and trust them completely."

The Altima truffiére (truffle orchard) is populated with around 800 trees. That's a lot of ground to cover, which means a daily strategy is crucial, so Hanene regularly changes up the starting points. As soon as she releases the leash, the dog — Stella on the day I was there — is off, head low, Hanene hot on its heels. The dog stops where the scent is strongest and will scuff the ground.

Hanene takes it from there, dropping to all fours alongside the excited dog, face to the ground, seeking out the subtle nuttiness that will confirm X marks the spot. If the truffle is ripe and ready, the aroma breaches the topsoil and Hanene starts excavating with — it should be noted — the skill of an archaeologist. 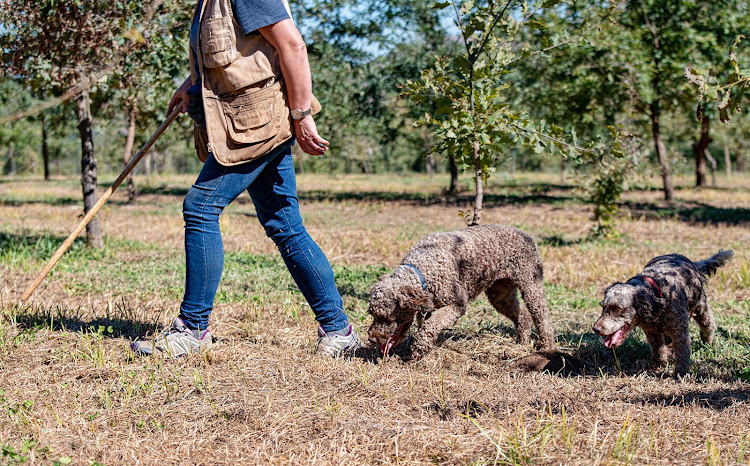 As she progresses, other factors that indicate she's in the right place are the presence of earthworms, and with a small tool resembling an arrow-shaped knife, she proceeds with care until she sees the head of the truffle, scrapes a minute section of it to determine colour and readiness, and from there gingerly carves it out of its subterranean refuge, an exercise that takes about 15 minutes.

Harvested goods stay fresh for around 20 days and are swiftly dispatched to Chef HW at Terra Del Capo Tasting Room and Antipasto Bar at the Anthonij Rupert estate in Franschhoek.

Truffle harvesting season generally runs from May to the end of August, so the dogs only work a few months of the year. While in hiatus, Hanene will keep them in top form and sniffer-fit, using frozen truffles until hunting season rolls around again. She is totally bonded to her dogs and ensuring their happiness is everything.

"I create an atmosphere for me and my dogs," she says. "It's a privilege to do what I do. As an ex-schoolteacher, I'd never have imagined I could do this but here I am, and so grateful. I was given the opportunity and I embraced it."

• Bookings are open for the Altima Truffle Experience and Tour from May 15 2021. Visit Antonijrupertwyne.activitar.com

Wine not get more out of your vineyard visit?