Looking for a green source of protein? Mussels are your best bet

While most aquaculture is damaging to the marine world, almost all mussel farming is a happy story, explains Andrea Burgener 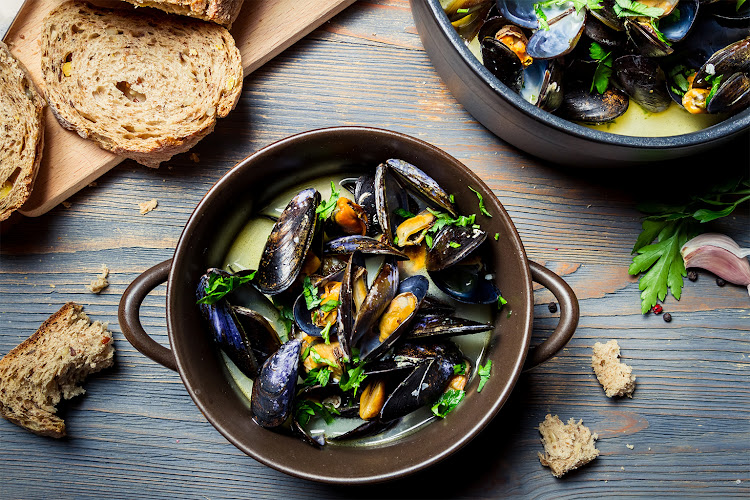 Veganism is a curious, er, animal. Here is a philosophy around eating that proclaims that a bowl of vegetables and grains – for which any number of mice, birds, insects, and the like have died or been harmed – is a more ethical meal choice than a serving of anything at all from the animal kingdom.

Sensible vegans (quasi-vegans?) see the madness in this fundamentalism, and when they need animal-based nutrients, they choose creatures that don’t possess any semblance of a brain. The obvious choice here is bivalves, so mussels, oysters, clams, and the like are all on the menu. In this group, farmed mussels are probably tops, both on the cruelty and environmental front.

Their future looks bright as a star food. Their growth and harvesting require, arguably, the least harm to any other sentient being, of any food we eat, including grains and vegetables. While most aquaculture is damaging to the marine world, almost all mussel farming is a happy story — possibly the greenest protein source on the planet.

Ignore the myth that those that haven’t opened are no good for consumption. Mussels already open before cooking are the ones to avoid

Mussels don’t need to be fed as farmed fish do (as filter feeders they feed themselves and help to clean the sea), and leagues of ocean don’t need to be destroyed in the way that animal and crop production destroy swathes of habitat.

How lucky that our locally farmed mussels — large, plump, gleaming, and silky — have the bonus of being something to celebrate purely for reasons of greed. But only when prepared correctly. If you’ve eaten mussels at a restaurant and found them underwhelming — mealy or rubbery, tasteless or bitter — chances are good that they started out frozen, were over-cooked, or (usually) both.

The supple plushness of a fresh mussel is a different thing entirely. If you’re up to the task of scrubbing and debearding and cooking enough for 10 mussel-lovers, order a box of the Saldanha Bay critters from the ever-great La Marina. As for recipe ideas, you could do worse than googling Julia Child’s mussels in white wine sauce.

And ignore the myth that those that haven’t opened are no good for consumption. In a farmed mussel, there’s virtually no chance you’ve hit a bad egg: the still-closed bivalves are often the best and fattest specimens. Mussels already open before cooking are the ones to avoid. Any that haven’t opened a minute or so after the majority have should be opened with a sharp small blade.

I’ve eaten and served more of these stubborn specimens than I can recall and have not yet killed myself or anyone else (that I know of).

• Burgener is owner of and chef at The Leopard, 44 Stanley Avenue, Joburg

A wave of change: Opt for alternative seafood this new year

Andrea Burgener urges you to consider swapping out salmon and prawns for the greener, and equally delicious, trout and mussels
Food & Drink
2 years ago

How mindful are we about the clean eating, plant-based, veganism food trend?

Pesky pescetarians: No, eating fish does not make you a vegetarian

It's a little fishy that you won't eat meat, but you'll raid the ocean's pantry, writes Andrea Burgener
Food & Drink
2 years ago