In the kitchen: At Lardiere fine food’s new treat factory

Wanted takes a tour behind the scenes at the Lardiere pantry – a luxury kitchen factory that creates those exquisite treats on your hotel pillow. And we learn how to make almond and cranberry florentines 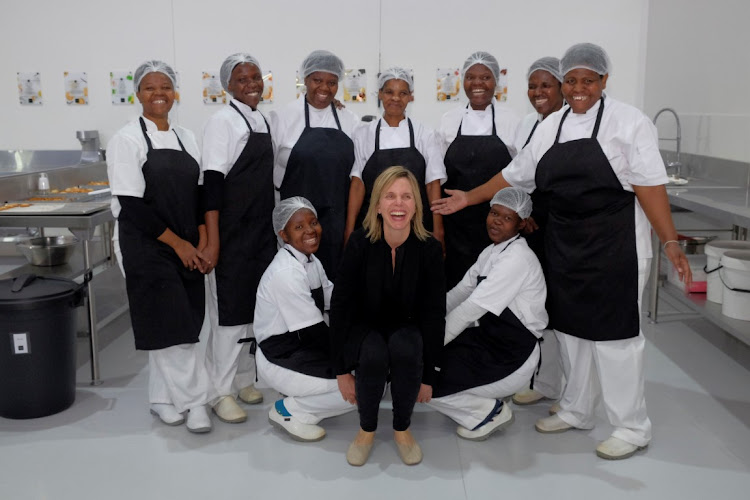 Chef Junelle Germishuizen insists that she got into turndown treats by chance. She was visiting a family friend’s newest hotel and was struck by how pristine the lodge rooms were. The linen was starched, the kitchen was stocked with Nespresso pods in every flavour, and there in a little container was a selection of treats from The Treat Company.

“And I thought, wow, that’s cool.,” enthuses Germishuizen. “I have such amazing products, maybe if I could just individually wrap them then it could work and that’s what I did.”

Treats - for those who don’t know - are the little baked goods or candies you find in your room in hotels and within the service industry. Fancy pillow mints if you must; and Lardiere locally hand produces the best in the business for the likes of Rovos Rail, The Royal Portfolio’s The Silo, Emperors Place, Radisson Blue, The Saxon, The Last Word – she even makes jams for Tashas.

Lardiere has recently moved its operations out of Germishuizen own kitchen, veranda and garage to a fully kitted out factory kitchen in Willow Park Manor in Pretoria. In the new space she plans on ramping further and ramping up her offering that focuses on natural, healthy and environmentally friendly foods. It’s a mission that comes complete with a nutritionist, no use of preservatives, and a dedication to 100% biodegradable packaging that strictly follows international label laws – going so far that each treat coming with its own nutritional chart and ingredient list in five different languages.

“Half the people may not follow the law but it’s important if you can measure what you are doing according to a world standard,” Germishuizen states matter-of-factly. “The people traveling to our country are well informed. When they pick a product up they know what’s inside it and they know what they want to eat. But more importantly, they want that information and I am going to give it to them.”

Her other main mission, she insists, is to help take the burden off busy chefs.

“They are slogging everyday from breakfast to tea time to lunch to tea time to dinner; because that’s all they do - in season - six or seven days a week. I’m just assisting them by completing that experience in the room.”

And she would know. In her 26 years of being a chef herself who has tried following the regular paths of having a restaurant and catering businesses. She then tried her hand at selling treats online but it was a little bit ahead of its time and didn’t quite gain the traction that she wanted.

“It did well, but it didn’t wow me and I’m a bit impatient. I wanted to be in someone’s face everyday. I wanted them to enjoy flavours everyday.”

It would be that box in the pristine lodge room and a conversation with Chef David Higgs who believed in her product enough to ask her to try her hand at making treats for The Saxon. From that moment she dedicated herself to focusing on small batch luxury artisanal foods, a practice she still follows today, but she jokes that there are just a lot more small batches.

David Higgs’ restaurant story starts and ends with a potato. Which is why it shouldn’t surprise you that he doesn’t think that his food at Marble ...
Food & Drink
5 years ago

“I know we are treading new ground with what we want to do in this factory. I don’t purposely try and do it; my head is just wired like that. I want to do stuff that is not already out there and that everyone is just copying. I want to make my own path and get people on board that are excited about it.”

And one cannot help be excited when you see a tray of Lardiere’s freshly prepared pate de fruits, amaretti biscuits, air dried fruit, strawberry hazelnut nougat, and matcha meringues. The level of detail on each aspect of Lardiere’s (very, very delicious) treats is astonishing and lives up to the level of class we should expect from our already impeccable, yet growing, service industry. The much needed finishing touch one might say. While we were there, we were treated to a lesson on creating the ultimate almond and cranberry Florentines:

All my recipes only have 4 or 5 ingredients. I like to work with amazing produce because that’s where every good recipe starts. 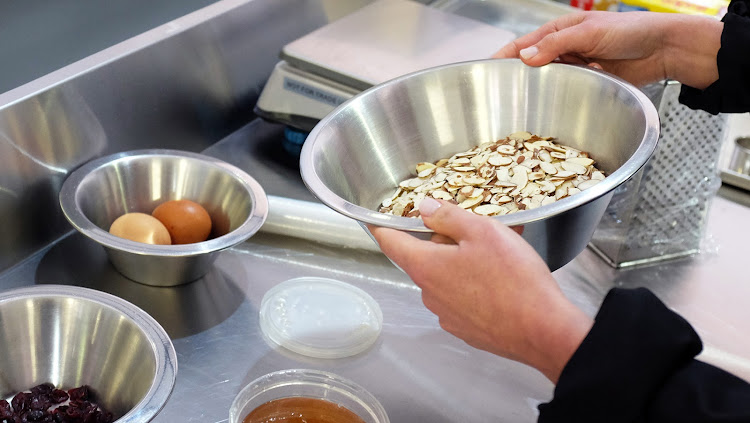 Like these American style flaked almonds that still have the skin. I have a fantastic producer who gets these for me because I just love them. 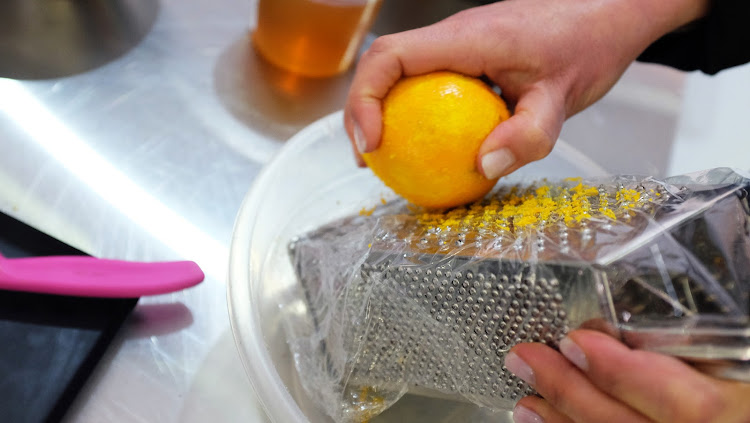 Then add zest of an orange. A clever zesting technique is to put plastic over the grater; it helps to get the zest off easier, otherwise the rinds sits in the little stars. 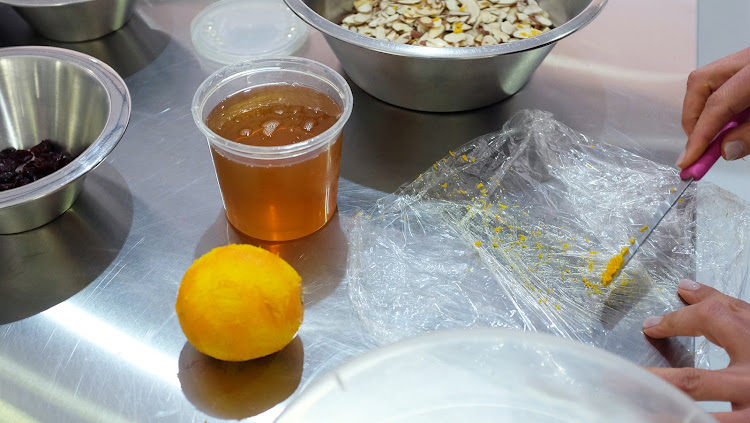 Add the zest along with the cranberries and egg whites - that acts as the bonding agent. 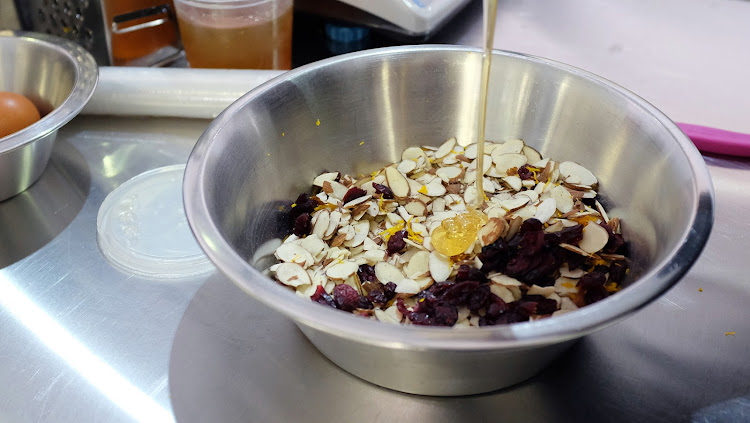 We use organic rice syrup. As far as sugar substitutes in baking goes, I hate them. I think they all taste terrible but this works (I even use it in my coffee.) We use it for the Rovos Rail, who are mad about it. But you can substitute it with icing sugar. 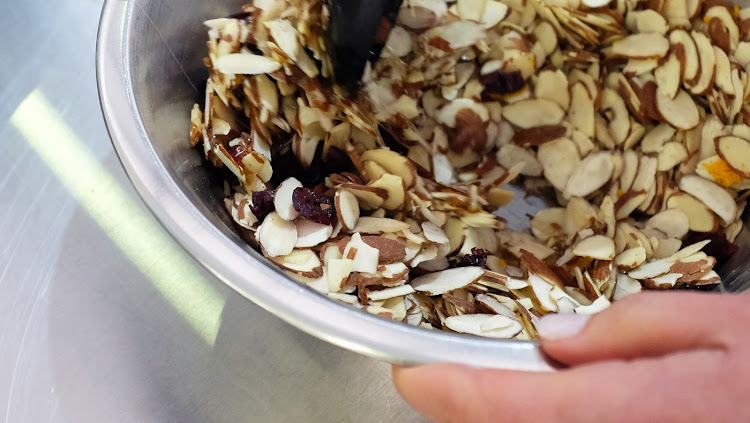 So all we have is almonds, organic rice syrup, orange zest, egg whites, cranberries and it is as simple as that. Stir and combine. 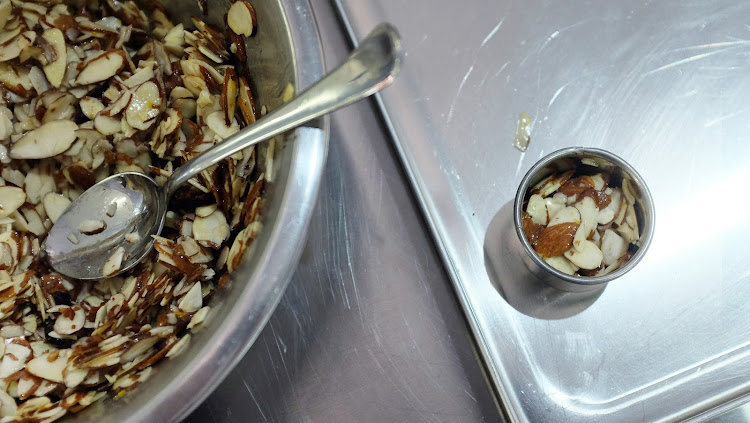 Using a lined baking tray and a 5cm cutter place spoonfuls into the cutter and bake at 130° for 15 - 20min. 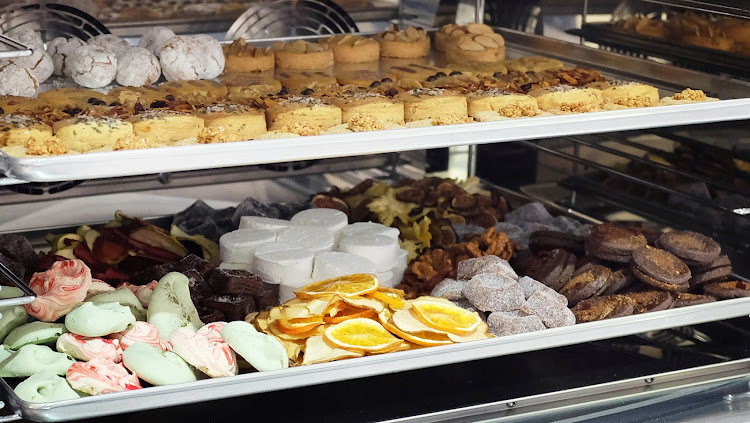 We do everything by hand. Some people cannot believe the work that my girls do; I must tell you that they are exceptional. 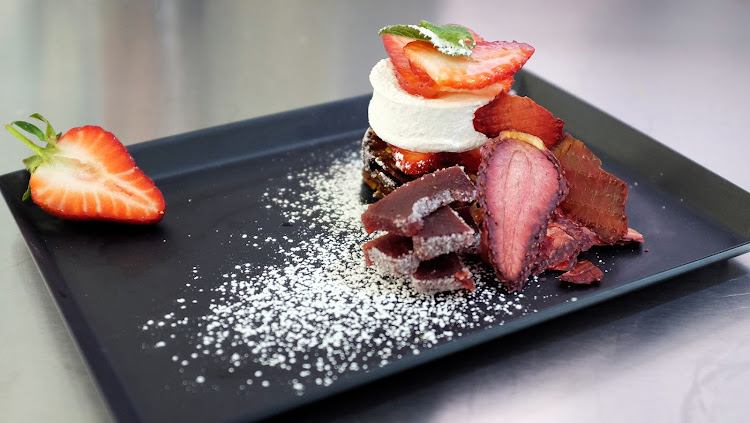 Pop the Florentines on a plate with a vanilla marshmallow and put some strawberries on the side to make a Florentine strawberry sensation.

Find Lardiere Fine Food Studio’s treats on a luxury pillow near you or find out more (including the nutritional values of the treat above) at lardierefinefoods.com