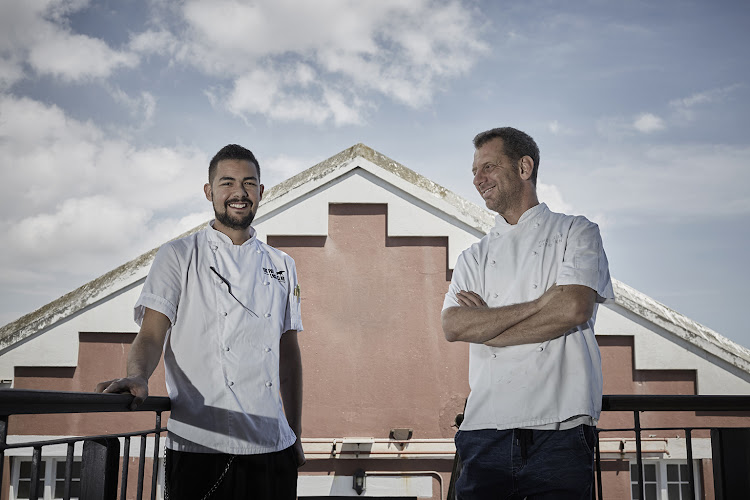 The seldom disputed darling of the Cape Town food scene is making his way up north for his first stand alone offering, as the Pot Luck Club pops up at Maboneng’s Hallmark House from this Thursday. We managed to squeeze in 20 questions with the busy chef before the craziness begins.

This is your second sojourn in Joburg after the Luke Dale-Roberts/Saxon collaboration. What brings you up north again – not that we are complaining. It’s actually through the Saxon that I came to hear about this site. So two things happened at the same time. Freddie [Dias] my chef at the Pot Luck Club and the manager Gray came to me and they said that they wanted to do a pop up in Joburg. Almost at the same time the managing director of the Saxon, George Cohen, said that The Saxon’s owner’s son and his business partners are working on this jazz bar in Maboneng. So the two things just fit together nicely and I did what I do and made it happen.

Why did they want to do the pop up in Joburg in the first place? Freddie is from Joburg initially and he was just saying that Joburg is crying out for something that is Pot Luck style. And I think he wanted to do something in his hometown, which is something I truly support. Besides, Joburg is the obvious option.

So the pop up is in Marabi, the new club on the ground floor of Hallmark House? Is it marking the opening of the club? Yes, that’s exactly it. We’re doing a friends and family soft trial run first, which will be a bit of a mess probably, because we’re running on the usual kind of opening mad panic. We always try and do a friends and family launch before we open so we can iron out all the snags. And then Thursday we open to the public. We’ve never had a launch that has not gone well, so hopefully we can keep it that way.

Oh, I’m sure it will go well! There will be lots of running around but it’s only by doing it will you actually identify your weaknesses and blind spots but we are keeping it small and light and only doing a limited amount of covers for the first couple of months and just being careful. For me, it’s just so important to maintain quality.

Well that’s part of what people expect from your name and anything attached to it. We have come to expect great quality things. One would imagine that even though you do this everyday in Cape Town, this is a new location with different suppliers and a different kitchen set up. I imagine it’s not as easy as copy and paste? No, exactly. You’re in your comfort zone when you doing it every day for a couple of years, so it’s always risky. But at the same time it’s always good to reanalyse everything. We’re doing a short menu and we’re keeping it quite safe and being quite cautious.

What about Hallmark House made you think it was the perfect location for the pop up? Maboneng has got such a good energy about it. I had a chance to walk around the area and I love the graffiti and the authenticity of the space and the old architecture. It feels a bit like Woodstock five years ago. So I think it’s an area that is exciting and moving forward.

So the club is called Marabi and is a jazz club, are you a jazz fan? Honestly? Not really. Do you like jazz?

No, I hate jazz, a lot. I like Dixieland jazz but anything that feels like it should be played in New York annoys me. I find it boring but I don’t mind jazz funk. There’s a band called The James Taylor Quartet who are quite cool. I really enjoy them.

So back to this limited menu that you mentioned earlier. What can we expect from that? We’re bringing back some of the age-old classics like the duck spring rolls and the braised beef rib in the dark beer sticky glaze. Freddie has a nice fish goujon with a granadilla tiger’s milk, which is a new dish from him, and a new take on the Cuban sandwich.

Why did you guys decide to change it up? You’ve always got to do something different. If you just cut and paste it’s boring and soulless. And what I hope, that in the same way that the Saxon has grown and evolved and become it’s own thing all together, I hope that this can as well. It needs to have the DNA of the Pot Luck and some classics but it will be nice for it to become more. There’s a very cool young chef called Sebastian that is heading up the team up in Joburg and I’d like to get him and the team around him to get developing new ideas as we go forward.

What goes into your take of the Cuban sandwich? Freddie did the Cuban sandwich for a Cuban themed New Year’s eve service at the Pot Luck Club. He did a steamed bun with carta negra ham, a raclette cheese sauce and homemade red cabbage sauerkraut.

What is your new favourite dish on the Joburg menu? I like all the tried and tested classics. I do like Freddie’s new tiger milk dish, which is lovely, but we’ve kind of gone for the big hitters if you know what I mean.

Talking about classics, what was the first dish that you put on the menu all those years ago? I think the first dish was something called mushrooms on toast and that was a brioche toasted with porcini egg custard, like French toast, and porcini tam on top. Pan fried mushrooms on top of that. And then porcini dust on top of that. So it was this massive umami explosion. I actually think we should maybe revisit it.

Give us the super short revisit into the history of the Pot Luck Club? I spent a lot of time traveling and cooking around the world and we opened the Test Kitchen, which is my representation of my style of fine dining style food, and then a year after opening I wanted to do something more casual. It was all about instant gratification that people could easily identify with and enjoy quickly. And from a chef’s point of view you could do your own version of sweet and sour prawns and have it on the menu in a day, rather than over analysing the hell out of it and having to reanalyse and re-examine, which is what the Test Kitchen is all about. The Test Kitchen is about breaking boundaries, whereas with the Pot Luck Club, I wanted to do something fun.

Where is your headspace now when it comes to food and what trends currently excite you? My headspace is very much in the Test Kitchen when it comes to food and creativity. I like to be there at least four or five shifts a week for dinner. Creatively we are always working on something. When we are busy opening another restaurant creatively we can go a bit dormant on the food front but we have got two very cool dishes on the menu at the moment that are very autumnal. We’ve got one that is a pan-fried wild mushroom dish served with a celeriac extraction. It’s a very simple dish but it really blows people away because of its simplicity. And then we have a really cool beef rib dish with a tarragon pesto that we scatter on the plate and a Jerusalem artichoke twill and extraction.

None of that sounds awful to me. Good! I just try to keep everything real, you know? It’s one of my food philosophies and I think particularly for me I find the processes very complicated but the final product seems quite simple and I think the impact that creates is better in a way. And I still maintain that a good classic foundation helps.

There is a lot of extraction in those dishes. Is that a process you’re playing around with a bit more? Yeah, a lot of our sauces are made from vegetable extraction now. They’re lighter and more interesting.

If you could collaborate with any chef who would it be? There are so many that I would love to work with. We did a thing with Jorge Vallejo from Quinonil [of Mexico] at the end of last year and that was really fun because a) he was a brilliant chef and b) he’s a good bloke. So I would probably choose a chef based on the fact that I would know that I would get on with him. And his ego would have to be not out of the box and I would want his food to have an impact on my team. There are just so many that I actually wouldn’t want to name one.

From your time at the Saxon, what differences have you noticed between the Joburg and Cape Town food scenes? The food scene in Cape Town is obviously more restaurant focused, so there is quite a foodie culture. I think Joburg has quite a foodie culture too, it’s just waiting to happen. There are a lot of people on the starting blocks that are very exciting. I think the Saxon venture was very good because it’s such a well-established team and Candice [Philip] is such a fantastic chef and it’s been great. But, for me, it’s exciting to do something that is stand-alone. I think Joburg seems to enjoy the fun aspect of dining out rather than the serious aspect, if you know what I mean.

It’s because we’re serious all the time. We can’t be serious while we eat as well. Exactly, you have a more social angle to eating out.

Where do you like to eat while you’re up here? When I’m up here I’m too busy working. I arrive at the airport, I go to the Saxon, I work and I get back in the taxi and fly home. So I haven’t really gone into the Joburg scene but I want to try go to Chinatown while I’m here.

What’s your favourite comfort food when you’re off the clock? I like shepherd's pie - when my wife makes it. You have to have some Lee and Perrin Worcestershire sauce on the side though, in my opinion. It’s a standard.

Lauded chef Luke Dale-Roberts has been hard at work finding ways to reduce his restaurants’ water consumption whilst maintaining the flavours that ...
Food & Drink
4 years ago
Next Article
Commenting is subject to our house rules.
© Wanted 2022 - If you would like to reproduce this article please email us.