On his early memories of food and authentic Mexican cuisine

It seems sacrilege to mess with traditional food, especially when it's so pure and good, but whether through appropriation, invasion or mutually beneficial exchange, people have been remixing each other's recipes for centuries. 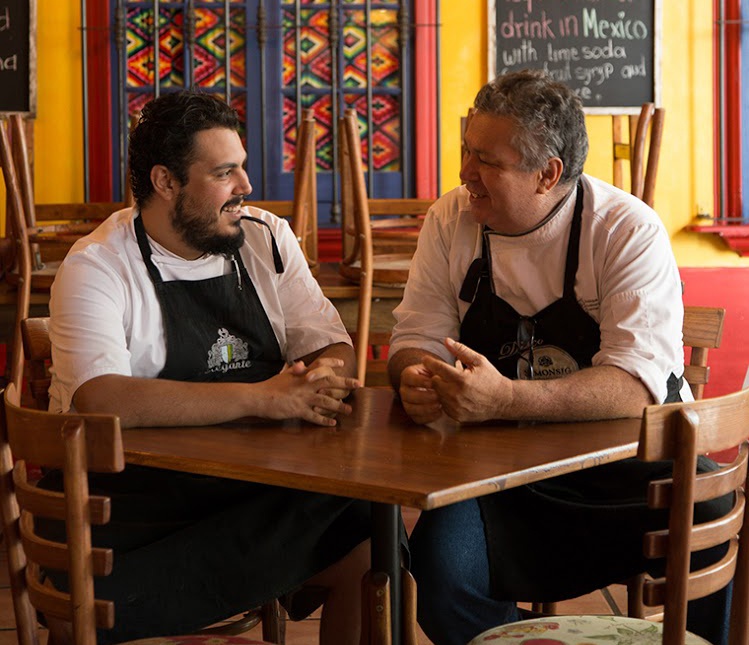 Through Tex-Mex, Americans did some cheesy things to Mexican food, which most people now believe to be authentic. Young chef Ricardo Garcia-Aispuro at San Julian hopes to re-educate us on "real" Mexican food while presenting his contemporary take on the basics. Ricardo came to South Africa with his family when his father, Arturo, an architect, was contracted to work on 2010 FIFA World Cup accommodation projects.

Arturo then left architecture to partner with his son in the kitchen and with the rest of the family front of house, Ricardo has created a resplendent taqueria where the tortillas are made daily from corn, milled the old-fashioned way in their courtyard. The tortillas are so good that San Julian supplies most local restaurants. At the bar, you'll find the perfect margaritas, made with 100% agave tequila.

Your first memories of food? On my grandmother's farm in lower Mexico, near a very small town. I remember the way my aunts used to make chorizo, the smell of chillies and the way they used to cook the pork to make products. They'd wake up at 4am to kill the pig, cut the different parts and cook one part into something we call carnitas (little meats). They used different legs and loins and everything else to make chorizo and sold the lard. I also remember the goats. There was something very traditional we made called birria — goat with chilli — and we cooked it for about nine hours. I remember the way they killed the goats, because I was about six years old and for people from there, it was completely normal.

When did you decide to become a chef? I think the first time was when I was 10 years old. My parents were busy with their business and because I am the oldest brother, I'd have to make food for my little brothers when they were hungry. I liked to cook for them, although it was very basic things like fried eggs. When I was in high school I wanted to do something artistic and realised that the advantage of the culinary arts is that you can take it to a very high level and do great artisanal things.

Where did you study? In Ensenada, Mexico, at Autonomous University of Baja California.

What is the essence of Mexican food? It differs from culture to culture. First there were Mesoamerican cultures with Yucatans, Mexicas, Aztecs, Mayans. That's the pre-Hispanic cuisine you still find in Mexico and we carry the roots from that period, such as corn, herbs, chillies and insects. It's something I had to know as a cook — a Mexican cook. And then there is Spanish-influenced cuisine, which is the principal or most inspiring food that we got from the conquest in the 1500s. I have a book about Mexican food published in 1888 and it describes the Spanish when they arrived. They were surprised to find markets and cooks making amazing food with certain techniques. The Spanish opened this up to the world and made it richer.

Do you cook with insects? I tried insects in Mexico and in Africa. I see insects in a similar way to the tortilla — the way you make it and the price makes it very sustainable. Insects are a source of protein for the future.

How would you best describe your style of Mexican cuisine? I am Mexican. I've been eating Mexican food for at least 20 years and my father has been eating it for at least 40 years, so anything we cook is going to be with a Mexican touch. We need to add a little bit of heat and spices and we need corn, but we'd like diners to forget the term "Mexican", which is a concept.

What have you made for us? Taco de chorizo using a Sinaloa-style chorizo. We have different kinds of chorizo in Mexico, depending on the region, and this one is Spanish-inspired, north-west style. It's nixtamalised [when grain is pre-soaked and cooked in an alkaline solution like limewater] corn tortilla, freshly ground here at our restaurant using a mill. The chorizo is marinated for four days — we don't marinate it too much, because we need it soft to spread on the tortilla and easy to take a bite. The chorizo is pork cheek and shoulder mixed with spices, smoked chilli and guajillo chilli and we place it on the tortilla with potatoes, a little bit of sour cream, salsa and lemon. We also made ceviche. When I was a kid, I thought ceviche was a Mexican dish, but during my studies discovered that it is Peruvian. I'm not sure when it "arrived" in Mexico but some archaeologists say that the Incas and Aztecs knew each other, so ceviche is an example of the exchange of cuisines. You can also find it in Colombia, Chile and El Salvador. This ceviche is based on a recipe from Javier Wong, who is the best ceviche chef in the world. Some people call him the godfather of ceviche. 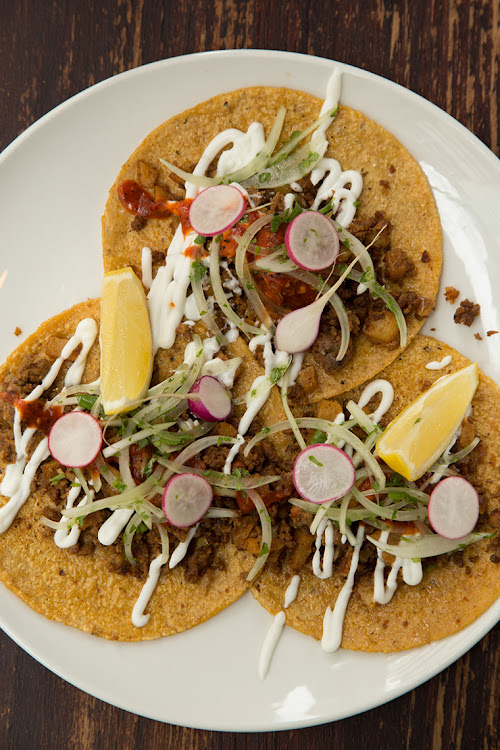 METHOD:
Add chorizo and onion to the casserole dish, stirring constantly so that nothing burns. When chorizo is cooked, place it on the tortillas. Garnish with julienned onion and coriander for extra flavour. Add sour cream and guacamole if you desire. 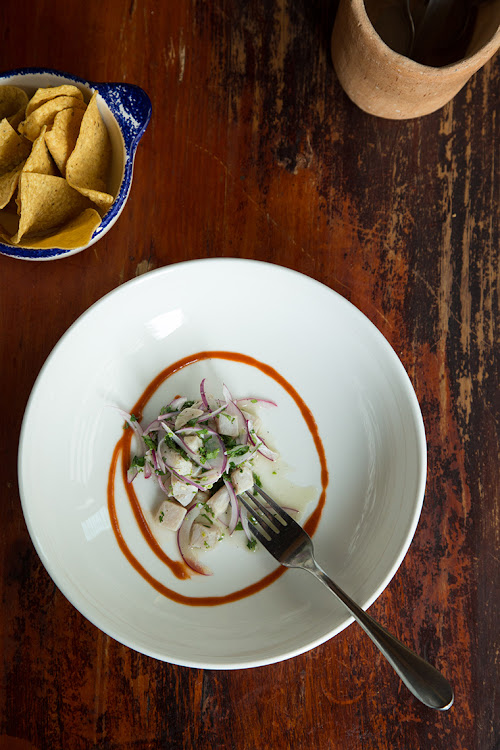 METHOD:
In a bowl add fish, spring onion, chilli, lime juice, salt and pepper. Mix well and leave to marinate in the fridge for five to 10 minutes. Add coriander and mix. Serve in a bowl, with corn chips on the side.