The money bag: Why luxury handbags are a stylish investment opportunity 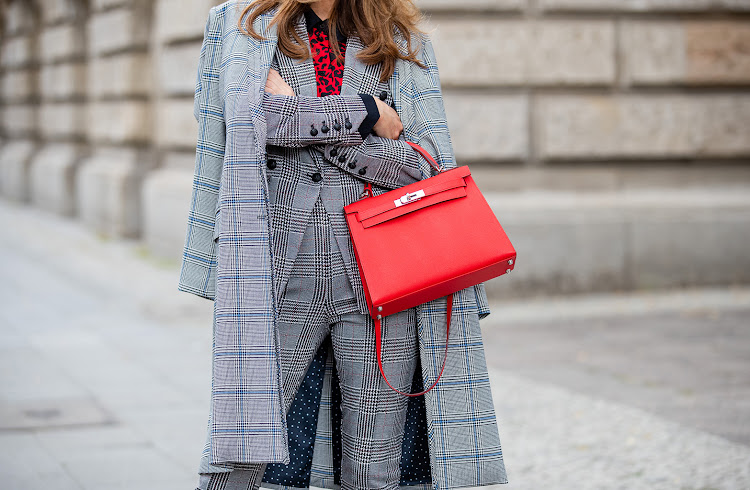 Carrie Bradshaw would feel vindicated. The lead character in the 1990s TV series Sex and the City regularly found herself knee-deep in financial distress because of her unquenchable desire for shoes, clothes and bags. Turns out collectable handbags have now officially become an asset class, and in some instances can yield a small fortune.

Blending consumerism and commerce with creativity, a select group of handbags have increased in value through rarity and unique design.

In 2019 collectable handbags were a better investment than art, stamps (in second place) and rare whisky, according to the Wealth Report 2020 released last week by Knight Frank, a global real estate company and wealth researcher.

You’ve got the LVMH stocks and the Krugerrands. Giulietta Talevi has some other investment options worth considering
Voices
2 years ago

While art and whisky had an overall return of 5% last year, handbags jumped 13% in value, making them the prime collectable investment for the year, and knocking rare whisky out of its top spot. Stamps were up 6%. The worst-performing collectables were classic cars and jewellery, both down 7%. Overall the index, a weighted average of each asset class, fell by 1%.

High-end handbags are among the most powerful products in the arsenal of luxury brands. They’re auctioned at illustrious auction houses including Sotheby’s and Christie’s and, boosted by online sales, have reached a critical mass that can be tracked over time to determine value. The secondary market for handbags has also continued to grow.

The analysis from the report focused specifically on bags by French luxury goods house Hermès, whose most collectable styles include the Birkin and Kelly. These two famed bag styles, which have become status symbols, dominate a small group of handbags that can increase in value over time with prices starting at several thousand dollars and distribution remaining under Hermès’s tight control.

The most expensive bag yet sold at auction was a Birkin in white crocodile hide, bought for $380,000 in 2017. Made of white Himalayan crocodile, 18-karat gold and more than 240 diamonds, it was sold at a Christie’s auction to an unknown buyer in Hong Kong.

Yet the rise of luxury resale once seemed to threaten their exclusivity by making greater numbers available, according to Quartz. "They remain the rare fashion accessory that’s often more expensive on the secondary market than purchased directly from their maker." 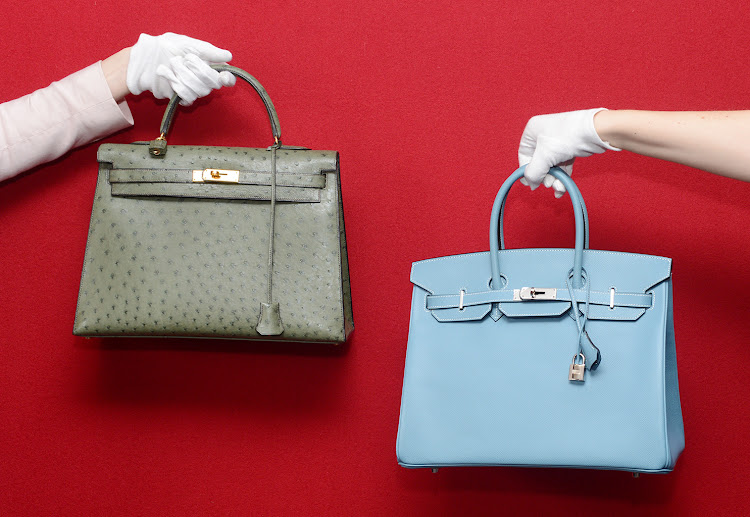 In a recent article in The Wall Street Journal, investment firm Bernstein said the estimated 120,000 Birkin and Kelly bags that Hermès releases each year (that’s a combined number) contribute 25%-30% of its total sales.

Sebastian Duthy, director of Art Market Research (AMR), which supplies much of the data for the Knight Frank luxury investment index, says it has only been possible to create an index on handbags because of the frequency with which many iconic pieces are now coming to auction.

"Though bags made by other luxury brands like Chanel and Louis Vuitton are also highly collectable, it is those made by Hermès that attract the highest price and are considered the most desirable," says Duthy. AMR found that prices of collectable handbags made by Hermès are up 108% over 10 years.

Andrew Shirley, editor of The Wealth Report and the Knight Frank luxury investment index, says handbags are increasingly being seen as an investment class in their own right, as well as highly desirable fashion accessories.

Before one gets "Carrie-ed" away by the investment opportunity represented by these handbags, it’s worth noting that over a 10-year period, rare whisky continues to top the charts, rising 564%, followed by cars at 194%. The luxury investment index as a whole rose by 141% over this period.

Former editor of British Vogue, Alexandra Shulman, in an article entitled "The Psychology of Designer Handbags" for the Business of Fashion website, reflects on why shoppers invest so much emotionally and financially in handbags and suggests they are the leading accessories of our time.

"For most women their handbag is a multitasking device that combines the virtues of practicality and utility: along with showing off personal taste, it suggests a certain economic prosperity."

Six of the world’s most expensive handbags belong to [Hermès], with the Hermès Kelly Rose Gold second at $2m

It’s the item that every brand hopes will sustain them through good times and bad, says Shulman: "The product that has been relied upon for sales when ready-to-wear is having a weak season, or in better times, is simply the lovely, high-profile icing on the cake, adorning store windows and providing catwalk fodder, while contributing only a small percentage to the bottom line."

Shulman talks of how the handbag was part of the changes brought about after World War 1 and the increasing emancipation of women, for whom carrying a bag became a sign of independence and stature.

"Women had their own cash and bank accounts, and keys to their own property and cars — and they wanted the world to know it." There were cigarettes and lighters, lipsticks and compact powder.

"Women are prepared to fork out substantial sums for an item that, in its most basic form, does nothing that a supermarket plastic bag can’t do — except make you feel good."

And let’s not forget that these high-end premium-brand handbags have become a mobile store of value, much like a painting which can be rolled up and moved.

WHAT'S THE DEAL WITH THE KNIGHT FRANK 'WEALTH REPORT'?

Wellbeing is the theme of the latest "Wealth Report", the first time it has featured. The desire to live healthier for longer has an impact on every aspect of its readers’ lives, from the design and location of their houses to the companies in which they might want to invest.

The driving force behind corporate strategies, at least in public, is the trinity of environmental, social and governance criteria. And the quest for longer, healthier lives is the main trend driving the burgeoning wellness industry.

Though last year was a tumultuous one, more than 31,000 additional ultra high net worth (UHNW) individuals were created, benefiting from rising global stock markets and increased property prices.

This brings the total to more than 513,200 (those with a net worth of more than $30m). Almost half of the world’s richest live in the US.

The Guardian says this means there are more ultra-wealthy people around the world than make up the populations of Iceland, Malta or Belize. There are now 50-million dollar-millionaires, up from 46.9-million last year. That’s more than the population of Spain.

The report estimates the UHNW population is forecast to swell by a further 275,000 to 650,000 by 2024, driven largely by Asia and Africa, as huge fortunes are being made in India, Egypt, Vietnam, China and Indonesia.

Property was the largest proportion of this uber-wealthy group’s investment portfolio, followed by equities.

BLOW THE BIG BUCKS ON BLING

According to website Finance Online, when it comes to bags, the more limited and exclusive the item, the more it sells for.

Luxury brands manufacture only one to three items with a unique design. The item is decorated with diamonds and other jewels, and auctioned off. The website lists the Mouawad 1001 Nights Diamond Purse as being the world’s most expensive handbag at $3.8m, though Hermès dominates the high-end list. Six of the world’s most expensive handbags belong to this fashion house, with the Hermès Kelly Rose Gold second at $2m. 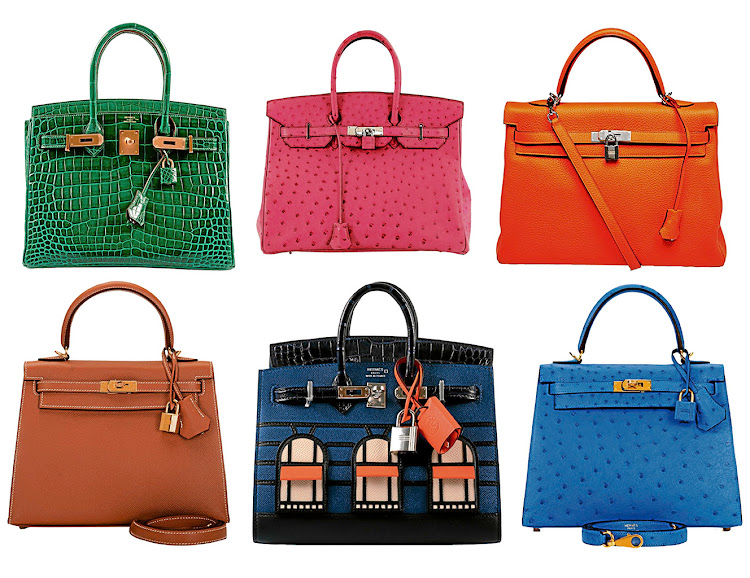 It’s worth noting that No 5 on the Finance Online list went to the Cleopatra clutch, made by the SA-born US ambassador to this country, Lana Marks.

The Cleopatra clutch bijoux bag has been customized for stars including Charlize Theron, Kate Winslet and Helen Mirren, but it’s the version Chinese actress Li Bingbing showed off on the Oscar red carpet a few years back that got everyone talking. It was replete with 45 carats of white diamonds set in 18k white gold and bore Bingbing’s name in pink diamonds and pink gold.

Carol Bouwer is anything but a bag lady — and yet she totally is one. The CEO of a production house, she’s also a handbag designer who opened a shop in the exclusive One&Only hotel in Cape Town in September last year.

“Like every girl, I love bags. I love craftsmanship,” she says. For her, it’s about the beauty as well as the pride of carrying something so well made. “I was tired of not being able to afford the best. The bags that are the most coveted around the world are really expensive and difficult to acquire.”

Bouwer was a client of some of the big brands but wasn’t always able to get what she wanted because of affordability (not to mention lengthy waiting lists).

Recognising that much of the leather in those big-brand bags came from SA, she found out how to create them, and now they’re made in Cape Town with leather from Africa. Bouwer had been selling her bags to a few people a year for 10 years when she decided to go retail. Prices range from R8,000 to R200,000 depending on the skin of the product.

“I could make them a lot cheaper if I went to China or Turkey, but part of the incentive is to feel I’m contributing to job creation or at least retaining jobs.”

Why is a bag so important? For different women it means different things, she says. She has lived on various continents but the one thing you cannot separate her from is her handbag. Her home in Cape Town was threatened by a fire on the mountain not too long ago, so she grabbed her crocodile Meghan Bag (yes, named for that now second-tier royal) from the Carol Bouwer range. “I knew I could put in my jewellery, take my most meaningful things, my passport … my bag is my home. It’s my desire to stay connected to that which is meaningful. I took a particular watch that has meaning and my toothbrush, and we ran away from the fire.”

Bouwer says for women going into the workforce for the first time, buying a branded or exotic bag is a symbol of achievement.

The glamorous entrepreneur was so inspired by the story of local businesswoman Amanda Dambuza after reading her book Baked in Pain, she has a new collection coming out in her honour this month — in time for international women’s month.

“The bag is strong and resilient and yet has a gentility to it. It’s about endurance and overcoming the odds,” says Bouwer.

Dambuza had an incredibly tough upbringing, and rose through hardship to establish herself as a respected and award-winning businesswoman. She sits on the board of Redefine Properties, among other companies, and has just been named chair of Grindrod Bank.

The global beauty market is growing at a tremendous clip – who should you invest in?

The global beauty market grew by 5.5% in the last year – and investors should consider L'Oreal shares, writes Paul Theron
Fashion & Grooming
3 years ago

• This article was originally published by the Financial Mail.