In another groundbreaking collaboration from the luxury maison, contemporary artists were given free rein to reinvent its classic Capucines bag 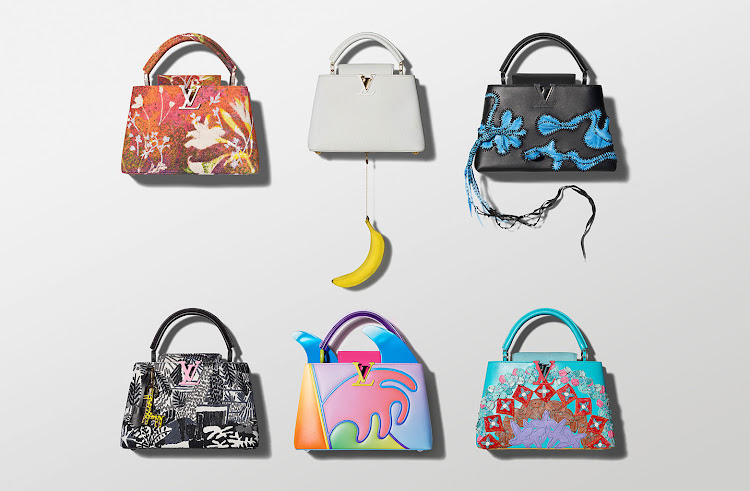 In 1854, a man named Louis Vuitton launched his eponymous store on the Rue des Capucines in Paris. Fast-forward 165 years – and a growing portfolio boasting $39.3b brand value – the behemoth has solidified its spot as the most valuable luxury brand in the world. You don’t get to hold that honour without staying relevant and constantly reinventing the game. From bags to fragrances, the brand has consistently upped its ante, involving big-name artists to reinvent some of its most iconic pieces – most recently, the Capucines bag (named after the Parisian street).

Launched six years ago, the versatile bag has become a contemporary classic, much adored by fashionistas the world over. This month saw the launch of the Artycapuines Collection – another groundbreaking collaboration from Louis Vuitton. According to a  Louis Vuitton press release, the house gave six artists from around the globe carte blanche to redesign the bag. Sam Falls, Urs Fischer, Alex Israel, Tschabalala Self, Jonas Wood and South Africa’s very own Nicholas Hlobo were given no guidelines other than to repurpose it and innovate using their signature styles … a blank canvas, if you will.

In conversation with How To Spend It, Michael Burke, the house’s chairperson and CEO, explains: “Consumer expectation now is for interesting, contemporary, relevant creativity.” Opening up collaborations with artists is one way the brand aims to appeal to consumers’ emotional side – making an object more than just a utility vessel, giving it a story, making it art … or whatever you want it to be.

Louis Vuitton’s relationship with the arts is not new – it dates back 100 years. Notable collaborations include artists Stephen Sprouse, Takashi Murakami, Richard Prince, Yayoi Kusama and Jeff Koons. This gave the artists a new platform to showcase their creativity and innovation and the craftsmanship and skill of the house’s ateliers. The Artycapucines is no exception, and for us at Wanted, the inclusion of Hlobo makes this collection all the more special. In an interview with Louis Vuitton, when asked the main reason for taking on this project, the talented and humble Hlobo answered: “There are wonderful people out there, brighter than I am, but Louis Vuitton came to me. I took that as a sign that they respect what I do and so I felt my primary objective was to honour the request from the house.”

The Cape Town-born installation artist creates hybrid artworks from welded and woven materials that create complex visual narratives of a post-apartheid South Africa and Hlobo’s own experience of his ethnic, gender and cultural identity. His signature two- and three-dimensional objects, his delicate use of various materials and method of creation - stitching, painting, welding – are mirrored in his rework of the Capucines.

As an artist who is curious about the “ugliness” that lies beneath the surface of things, this collaboration, he explains; “was a wonderful opportunity to ‘cut through’ the Louis Vuitton bag and make beautiful things grow out of it”. 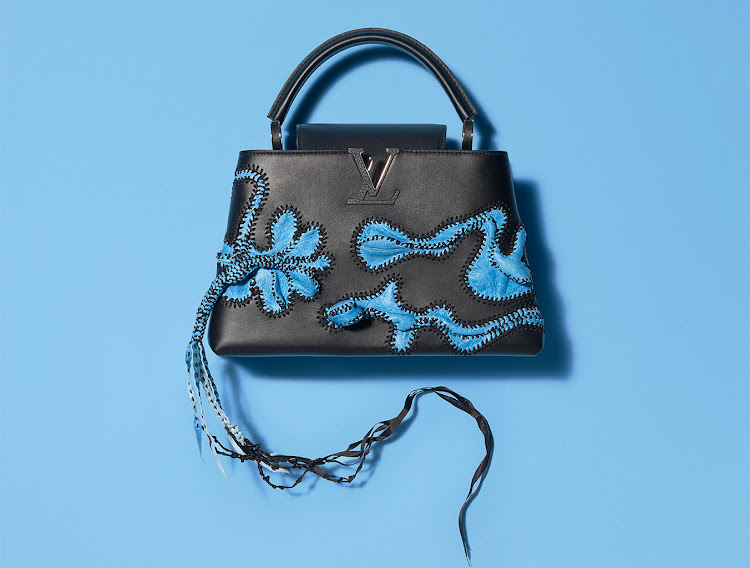 Inspired by the flower on Louis Vuitton’s Monogram canvas, the patches on Hlobo’s take on the Capucines bag appear to have grown organically from its interior, breaking its clean profile. Hlobo manipulates the leather, opening it up to see what might lie beneath the surface. The rationale behind it, he says, is to suggest “what might be the relationship taking place between the lining and the outer skin of the bag – that there might be life that is hidden there”.

Heavily worked with embroidery and painstakingly stitched, the contrast between textures and the back-and-blue palette works to create a beautiful, handmade, hybrid object.

Inspired by the natural world, Falls creates abstract landscapes on large canvases that explore the materiality of colour and light. Born in San Diego, now living in Los Angeles, the artist was inspired by the wildflowers found in northern California, creating a large-scale artwork which he cropped for the bag. The result was a beautifully worked fabric where depth and texture is played with using a jacquard weave, high-definition printing and embroidery. The artist’s trademark pigmentation technique is evident in the vividly dressed bag, which is accentuated by the mother-of-pearl logo and handle rings. 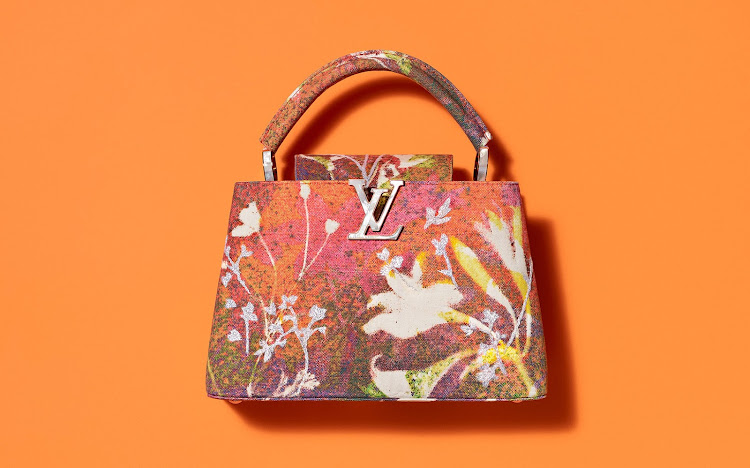 Swiss artist Fischer is best known for his large-scale sculptures and installations that explore themes of transformation and decay, using everyday objects. For him, the project meant defining that “the bag, is a bag; and what I do, is what I do”. Staying true to his aesthetic, his white Taurillon leather bag comes with six hyper-realistic, hand-painted fruits and vegetables – things of nature which he describes as perfect in themselves – attached with a delicate gold-plated brass chain, creating a hanging sculpture of sorts. 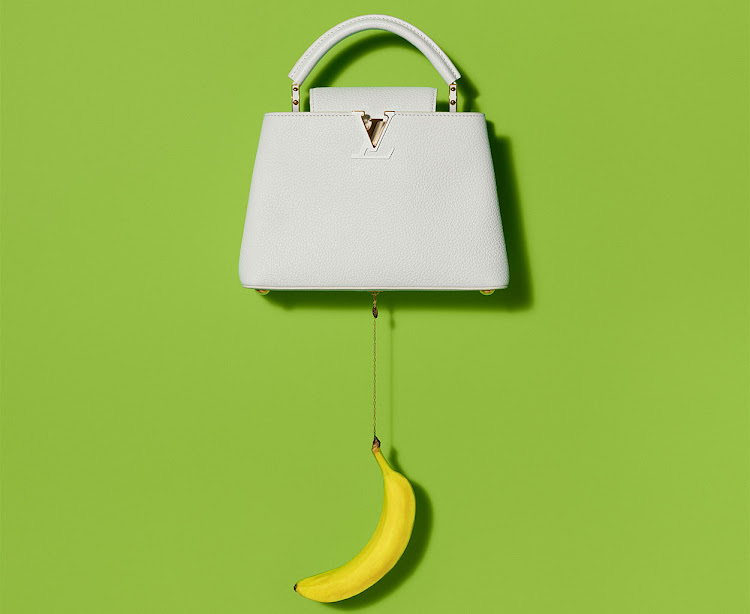 Hollywood, the cult of celebrity and the American dream form the basis of Israel’s work. Born in Los Angeles, Israel’s opus investigates the city’s cultural and social spheres, their contradictions and beauty. In his rendition of the Capucines bag, the artist’s signature bold, high-gloss rendering and use of the wave motif is evident. Beach culture is championed, drawing inspiration from waves as “a rhythm for life”. Sunscreen, wetsuits and riding the surf – the leatherwork reflects Cali living. The “surfboard fins” (one has a comb attached, the other a mirror) add a playful twist to the bag’s classic shape. 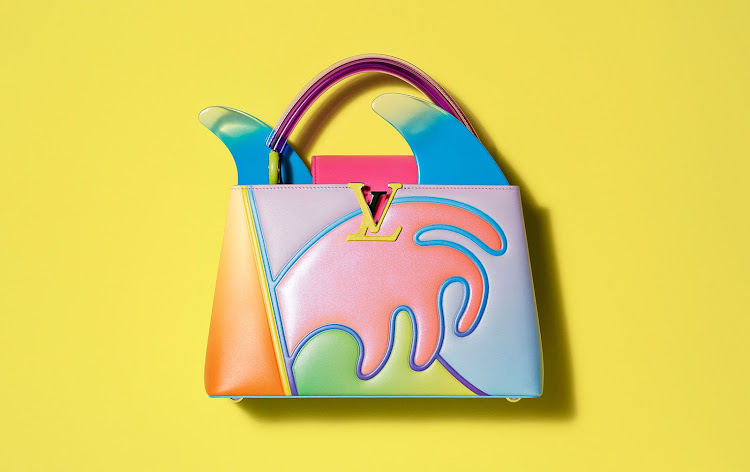 The black female body takes centre stage in Harlem-born Self’s art. Using patchwork and collaging, her works are distinctive and unique. Deconstructing form excites her and this is evident in her Capucines. Breaking down the Louis Vuitton monogram, and using 19 types of leather (some upcycled), Self rebuilds the form using deliberately imperfect stitching to give a rustic feel and prompt an unconventional dialogue with the bag’s perfectly crafted exterior. 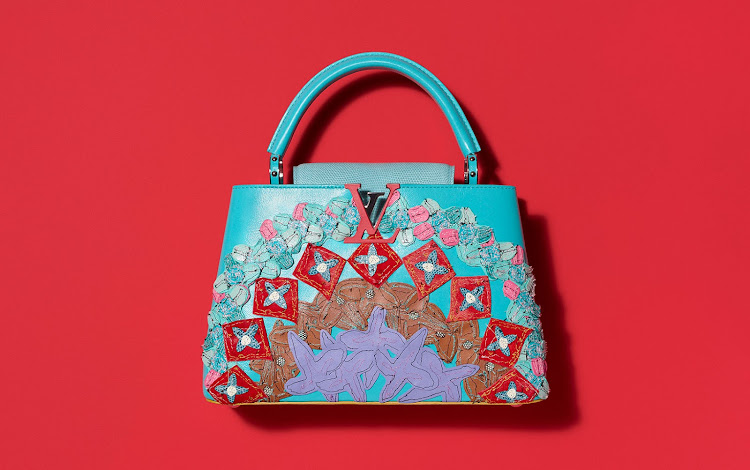 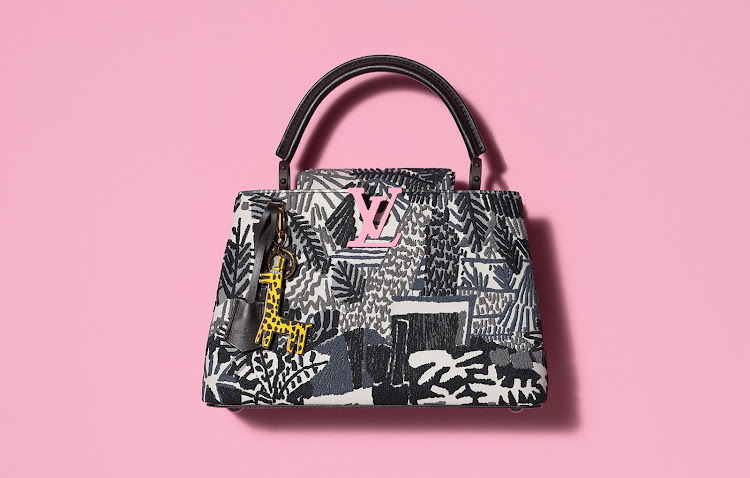 The line between art and fashion has forever been blurred, with collaborations like these further synchronizing the two – adding value for all involved. The benefits are three-fold: artists are given another platform to express and share their art with new audiences, brands are elevated and consumers walk away with a never-before-seen, limited-edition, covetable object. Who doesn’t want a beautiful bag, a work of art in itself, which is uniquely crafted, showcasing the world’s most talented artists, with a LV monogram on it? Fashion is a mode of personal expression – as is art – merge the two and that’s where the magic happens ... and, if you’re lucky, it can hold your phone, lippie and house keys too!

• Each model of the Artycapucines Collection is limited to 300 pieces, available in stores and online.

When art and fashion collide - masterfully

Designer Palesa Mokubung’s bold, vibrant designs will soon be available at H&M stores globally – and locally
Fashion & Grooming
2 years ago
Next Article
© Wanted 2021 - If you would like to reproduce this article please email us.

Hats off to Hermès

Get free gifts with Memo Paris perfumes, your sensory ...

Take on summer in the best of company — Bulgari, ...

The ritual of shoe care