Driving proudly South African does not disappoint with the BMW X3 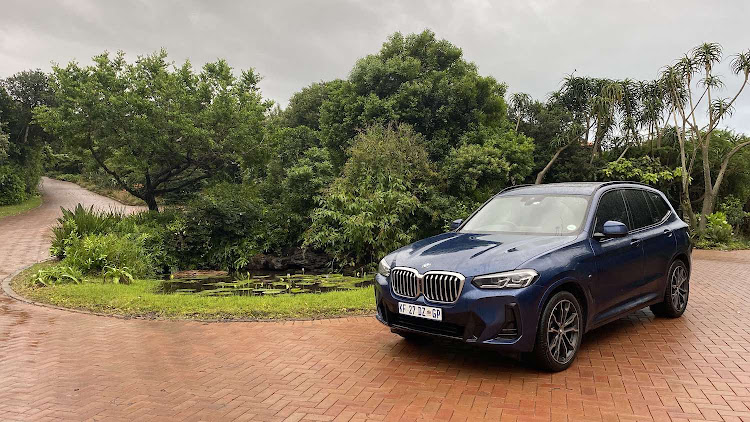 It took nearly four years, two cancelled trips and waiting out the peak of a global pandemic, but eventually we made it back to SA to visit the friends and family we had said goodbye to in 2018. It was of course, emotional, but it was also a chance to become reacquainted with finding our way around Joburg, dealing with some of the more interesting driving habits of fellow road users and of course, dealing with some of the less-than-ideal infrastructure issues.

Our choice to get us around was a proudly South African vehicle, the BMW X3. Granted it might have some German blood in its veins, but it’s built at BMW Plant Rosslyn near Pretoria and from there the X3 is exported around the world. It’s a big success story, not just for BMW SA, but for the country itself as part of an impressive local vehicle production and export industry involving not just BMW, but other vehicle makers including Ford, Mercedes-Benz, Toyota and Volkswagen.

We crammed everything in, which meant two adults, two children and all the assorted paraphernalia that any family of four is well used to needing and immediately felt at home in the X3. It was an xDrive 20d which means all-wheel drive and a torquey and efficient turbo-diesel motor under the bonnet, all of which was to prove useful over the following couple of weeks.

The brainchild of Art Joburg’s Mandla Sibeko, the collective has significantly contributed to the broadening of the art economy in SA
Art & Design
4 months ago

Despite the full load, it delivered sufficient power when called on, only really wanting more on the odd occasion. There’s plenty of space and it’s well-equipped with everything from leather seats and panoramic roof to the latest BMW infotainment system. The latter provided some minor irritations though because every time anyone in the car even said “BMW” the personal assistant voice piped up “how can I help you” and wouldn’t accept us just shouting cancel at it. Tech can be challenging at times, but the children thought it was hilarious.

Ride comfort is good, although the run-flat tyres did make the going a little firm at times but we were very grateful for them whenever we failed to dodge a pothole and felt the bump as the rubber hit the edge of indented tarmac. Fortunately the run-flat technology was never fully called into use. 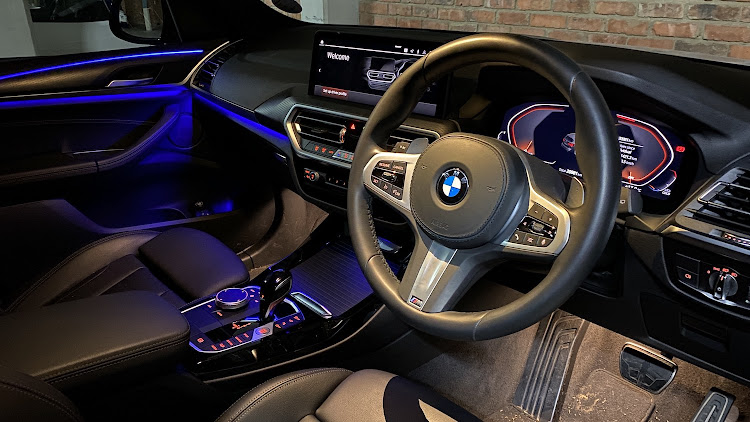 Around Joburg the X3 provided a great drive, with good visibility, that high driving position the whole world seems to want these days and good insulation from the sounds of the world outside. It was all very BMW.

The same was true on the drive down from Jozi to Durban and here we have to mention a word that is quickly becoming taboo around the world, diesel. Environmental concerns aside, I’m still a fan of the oil burner because many can easily allow you to travel up to 1,000km without having to stop and plug-in for an hour or so. It’s going to be difficult to replace it in countries like SA for those who regularly undertake long journeys. Synthetic fuels could well be the ideal solution, but they are still in their early days and the technology of EVs and batteries is advancing at a rapid rate. 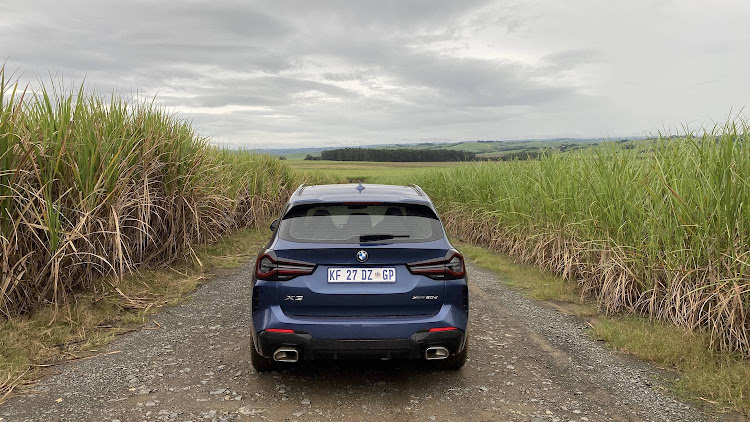 Anyway, that’s a whole other topic but suffice to say, the X3 did the entire drive to Durban without the need to fill up. Unlike an electric vehicle, it also improved its range on the way. We left Joburg with the range showing 482km, then drove 626km and when we reached Ballito it said we could still do 126km. Diesels love highways, EVs not so much.

The terrible disaster caused by the torrential rain in KwaZulu-Natal meant the X3 didn’t do many more kilometres over the coming week, except to go to municipal taps to fill up water bottles. It did have to tackle a few damaged roads and the odd gravel track, but nothing it didn’t take in its stride. 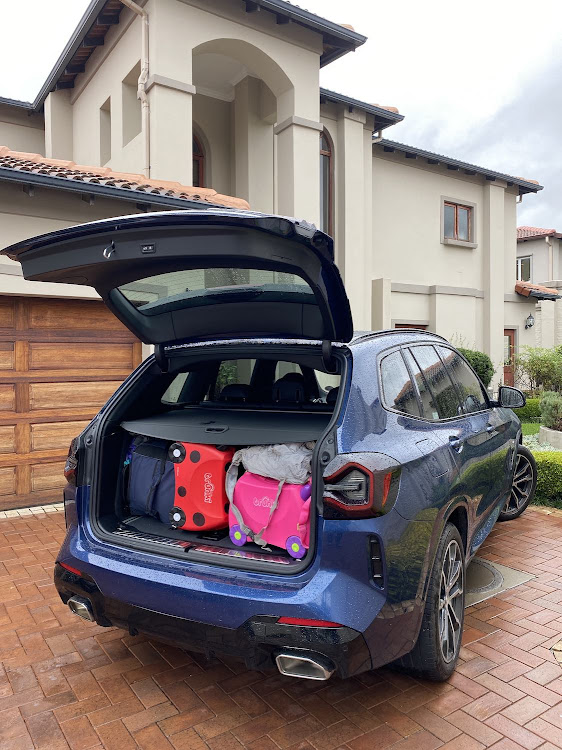 The boot space proved sufficient for the task of carrying all the paraphernalia for a family of four on holiday.
Image: Mark Smyth

Then it was time to do the trip back, which as you know is mostly uphill. The fuel consumption increased slightly but even so, having topped up the tank in Ballito, we arrived back in Joburg with half a tank left.

I did have another gripe with technology though and I have to admit this also involves a bit of human error. As we approached the top of Van Reenen’s Pass we were flashed by a speed camera. My other half pointed out it was an 80km/h zone and that I should have known that, but the traffic sign recognition camera didn’t pick up the change in limit and was showing 100km/h. The fine will no doubt land in my inbox soon enough, but it’s yet another reminder that the tech that Silicon Valley wants us to believe can take over control of the driving, is far from ready.

Tech niggles aside, the BMW X3 proved to be a superb travelling companion and a proudly South African choice for a trip home for the family. It’s the kind of vehicle that can do the daily commute, but then take you off on adventures when the mood takes you. Like one of my favourite cars, the BMW 330d Touring, it’s the kind of car you can live with for a long time, making memories as you go and turning it from being simply a family car to a real part of the family. 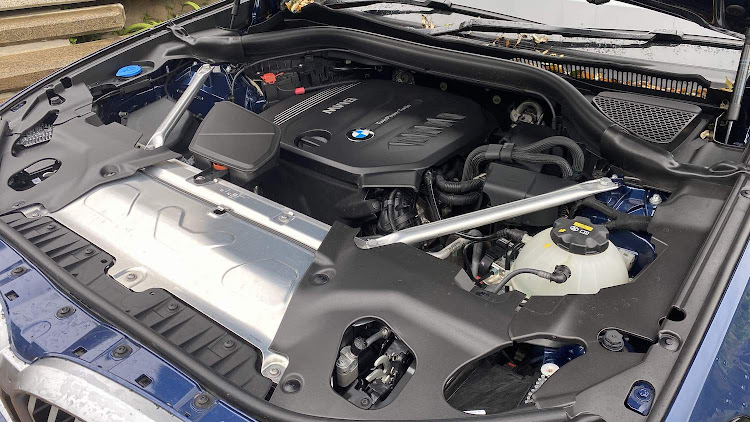 Mark Smyth headed to the Italian island of Sardinia to put the new Aston Martin DBX707 performance SUV to the test
Cars, boats & planes
4 weeks ago

The luxury of technology

Tech is rapidly changing the definition of luxury, but that hardly means an end to traditional aspects of motoring
Cars, boats & planes
1 month ago

Aston Martin has just revealed its DBX707, the world’s most powerful production SUV, but do we need performance SUVs?
Cars, boats & planes
3 months ago
Next Article
© Wanted 2022 - If you would like to reproduce this article please email us.