The Lamborghini Huracán STO is made to live the track life, but don't drive it like that in the city — not under any circumstances 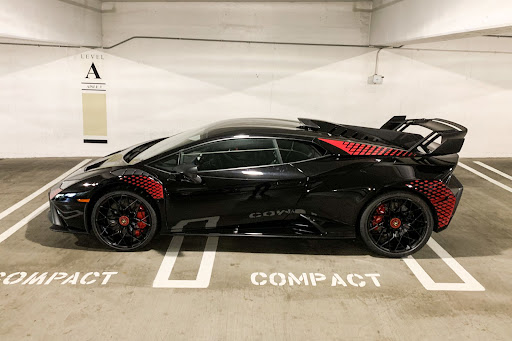 The 2021 Huracan STO is a track car supposedly meant for city streets, but it's not much fun there.
Image: Bloomberg

All right, so not all grandmothers drive slowly.

My own gran, Helen, drove with the authority and confidence of a Formula One pro. I’m sure yours was a real lead-foot, too; she may have been the terror of Colorado Boulevard. (For anyone born after 1970, that’s a reference to the song The Little Old Lady from Pasadena, which is about a speed-demon granny.)

But the notion that some older ladies drive carefully and slowly — too slowly, sometimes — is out there. With this in mind, I readily admit: for most of the time I had the 2021 Lamborghini Huracán STO under my purview, I drove like a grandma.

This is not to say that the $331,000 coupé, with a dorsal fin that won’t quit, is cumbersome. Quite the contrary.

It is Lamborghini’s most extreme variant in the Huracán line-up. It packs 631 horsepower and 565Nm of torque into a 1,520kg package primed for a paramount role. It goes from zero to 100km/h in 2.6 seconds; it has a top speed of 310km/h, which is good enough to put you in jail for a while.

On a drive to ComplexCon in Long Beach, Calififornia, I hit 160km/h in a blip — and the car carried enough power to punch back and forth across lanes while holding that pace. This is no small thing; it’s easy enough to get to triple digits, but the ability to maintain, double down, and play within that speed range belongs to a small set of extreme beings, and the STO sits pre-eminent among them.

Then in Los Angeles Crest — 42km of uphill turns as twisted as an old phone cord, perhaps the most technically challenging expanse of public road in the US — the STO behaved as if it had been born there. As if it were a mountain goat on wheels (and drugs).

Advanced rear-wheel steering worked to fight against any sense of understeering as I climbed to 1,615m above sea level; the limited-slip differential and stability control meant the STO stayed smooth and connected to the asphalt. It might as well have been painted on the highway. Turning the wheel never felt heavy as it can in lesser sports cars, even on decreasing-radius corners.

Especially when I put the STO in “Trofeo,” the sharpest of its three drive modes, its high-decibel, naturally aspirated V10 engine and instant responses to the most minute input from my hands or feet taught me very quickly that this car is made to live the track life.

Lamborghini marketing didn’t need to tell me that this “a track-focused street car” meant to vie with Porsche’s 911 GT3 RS, the McLaren long tails, the Black Series Mercedes-Benz AMGs, and Ferrari’s Scuderia models. The vent along the center of its roofline and the expansive rear wing served as blinking neon signals to advertise it. An hour of whipping it through traffic down to Long Beach imprinted on my brain the notion that this car was designed for the track.

But then I went soft. I drove to Beverly Hills. That’s where my knit gloves, pearls, and bifocals came out. Because the thing is delicate.

The Huracán STO is made almost entirely of carbon fibre. Do you know how much trouble it is to replace a single carbon-fibre fender? How easy it would be to crack a rim on those lightweight magnesium 20-inch wheels?

When I say entirely of carbon fibre, I mean that the STO has no carpet. The door panels are as naked as the day you were born. The door handles on the interior are fabric straps. Don’t even think about asking for a cup holder. Don’t try looking for the trunk: it is hidden under a hood that opens only if you lift off the whole clamshell front of the vehicle (which requires a special key). Such frugalities shave 29kg off the weight of Huracán Performante, the STO’s not-quite-as-insane predecessor, notwithstanding the STO’s addition of a new rear-axle steering system.

Don’t even consider trying to listen to music on Bluetooth, either — and not just because all the “real” car guys say you should simply enjoy the “sound of the engine.”. Nonsense. Unfortunately for me, the syncing system is so complicated and convoluted that I managed to loop it only once over the course of a full weekend. I spent the rest of the time fumbling through touchscreen images and layers of tech, trying to get back to “Connect new Bluetooth device”. It even brought me and the STO to a halt, distracted from what we should have been doing: driving.

A fish out of water in Century City

I also had to slow down while cruising to Bloomberg’s newsroom in Century City because I couldn’t see. Sure, I could not quite see straight through the 30%-thinner-to-save-weight windshield, but even after I adjusted to that I couldn’t make out the traffic lights at a complete stop; the windshield is so angled, it cuts the driver’s view into thirds. And forget trying to see anything behind your shoulder. The black slats that climb the back of the car like ribs block any viewing through the rear.

So you should lose any hope of switching lanes in regular city traffic. Especially in LA, which has the worst drivers I’ve encountered in 20 years of driving in various cities around the world. They are so tentative, unskilled, and unpredictable that it’s enough to make anyone want to move back to New York, where at least everyone agrees on which traffic laws to ignore. Do you know how dangerous this is if you can’t see? That’s how I felt behind the wheel of this thing.

Don’t even think about driving faster than 35km/h or so on city or local roads. The lift button on the STO raises its clearance by two or three inches, but even that maximum will not clear half of the pizza-sized potholes and earthquake-sized cracks that dot Wilshire, Fairfax, and La Brea avenues.

I did think about throwing caution to the wind and driving the STO like Alex Choi, the YouTube-famed enthusiast whose fire-throwing, purple metallic-wrapped Lamborghini Super Trofeo says “Don’t Panic” on the underside of the rear wing. Indeed. But he has the bank account to back that decision. And even if I did have that kind of money, this wasn’t my car.

So imagine me, hunched over the steering wheel of the Huracán STO, embedded in the middle lane for an hour at 25km/h as I drove down Olympic Boulevard: no banzai moves, no street-racer starts, no ab-forming cornering through town. Just cautious driving. Grandma would be proud.

Wanted travelled to the home of Ferrari in Maranello, Italy to experience a few days of Ferrari living
Cars, boats & planes
5 months ago

The Rolls-Royce Boat Tail takes exclusivity to another realm. Wanted spoke to its designer, Alex Innes, at Lake Como in Italy
Cars, boats & planes
7 months ago

The launch of Bentley’s new Continental GT Speed offered a welcome and exhilarating trip to Sicily
Cars, boats & planes
8 months ago
Next Article
© Wanted 2022 - If you would like to reproduce this article please email us.