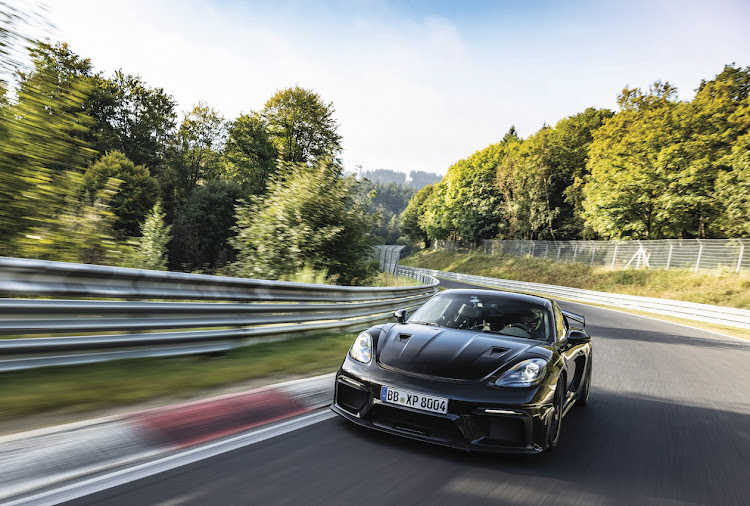 The Porsche 718 Cayman range is soon to get a new flagship in the form of the GT4 RS, and though technical details are still under wraps, the car has produced an eye-opening lap time around the Nürburgring Nordschleife racetrack in Germany.

In final testing before its launch, the mid-engined Porsche lapped the iconic 20.8km circuit in just 7min09.300 — more than 20 seconds faster than the standard Cayman GT4. On a track that has become the litmus test for proving a sportscar’s athletic prowess, the GT4 RS was, impressively, also 3.4 seconds quicker than Porsche’s previous-generation 911 GT3, a car that needs no introduction to Porsche enthusiasts as a track-taming special. The blistering Nürburgring time in the new GT4 RS was set by Porsche development driver Jörg Bergmeister, using a lightly disguised production car that was standard except for being equipped with a racing seat.

The car ran on grippy semi-slick Michelin Pilot Sport Cup 2 R tyres, which will be optional on the GT4 RS. In Porsche-speak, RS stands for RennSport (racing sport) — a badge that is reserved for top-performing models in the 718 Cayman, 911 GT2, and 911 GT3 lineups. The German firm says customers can look forward to a pure driver’s car that makes a thrilling driving experience an absolute priority.

The luxury car brand is in a position to show off a production version of its upcoming Valhalla model and start discussing specifications
Cars, boats & planes
10 months ago

“During development, we gave the 718 Cayman GT4 RS everything that characterises a genuine RS: lightweight construction, more downforce, more power, and, of course, an even higher level of responsiveness and feedback to driver inputs,” says Andreas Preuninger, head of Porsche’s GT model line.

“The fantastic lap time of the Nordschleife is impressive proof of how clearly noticeable these improvements in driving dynamics are.” Bergmeister describes the 718 Cayman GT4 RS as an uncompromising driving machine. “It feels as nimble as a go-kart on mountain roads, yet is impressively stable and well balanced on the racetrack. Otherwise, such a lap time wouldn’t even be possible,” he says. 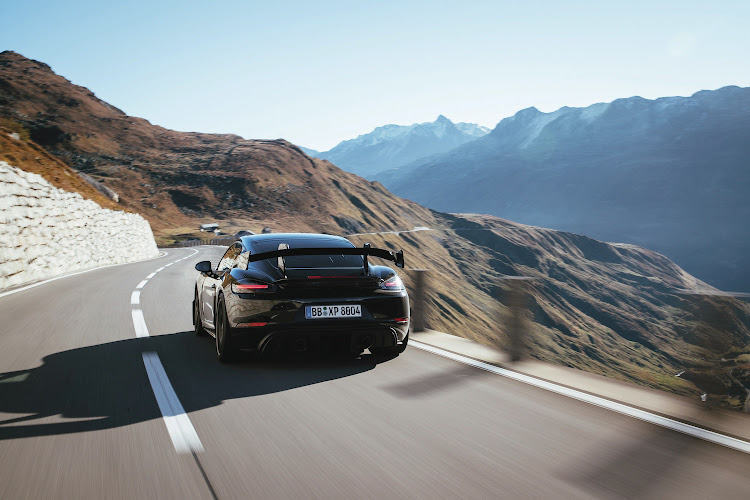 “The GT4 RS is one of the sharpest cars Porsche has ever developed. And you really have to experience the breathtaking noise it makes for yourself,” adds the driver, who has spent over 500 hours testing and tuning the 718 Cayman GT4 RS during development. As Porsche’s junior model range, the lightweight, mid-engined 718 Cayman has traditionally focused more on agile handling than on fire-blazing power, offering a more focused and purist driving experience. Porsche hasn’t yet revealed technical details, but the GT4 RS is likely to be powered by an uprated version of the 4.0l normally aspirated flat-six engine found in the 718 Cayman GT4.

The Nürburgring lap time suggests it has a significant power boost over the GT4’s 309kW and 420Nm, which revs to a vocally exuberant 8 000rpm. The car will be a rear-wheel drive and likely retain the GT4’s transmission choices: a seven-speed PDK automatic or a six-speed manual. Porsche Torque Vectoring with a rear differential lock will help to prevent the tyres from being smoked during robust cornering. RS-specific styling treatment on the new model includes a larger rear wing and a sculpted bonnet with air scoops.

The local launch date and pricing of the 718 Cayman GT4 RS are not yet known, but it’s likely to carry a hefty premium over the standard GT4’s R1.8 million.

Inspired by the past, made for the future, this supercar has all the right moves2021
Cars, boats & planes
6 months ago

With automobility moving inexorably towards e-hailing and non-ownership, the car as pleasure object seems an antiquated luxury
Cars, boats & planes
7 months ago

The Rolls-Royce Boat Tail takes exclusivity to another realm. Wanted spoke to its designer, Alex Innes, at Lake Como in Italy
Cars, boats & planes
7 months ago

Porsche 718 Cayman GT4 RS.
Image: Supplied
Next Article
© Wanted 2022 - If you would like to reproduce this article please email us.