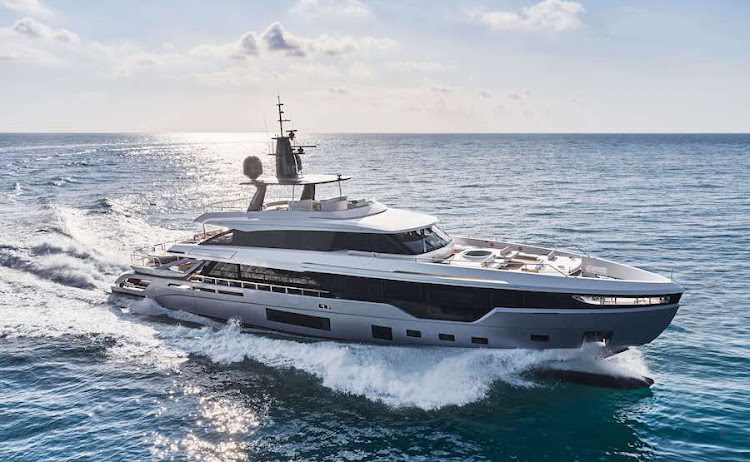 The design aims to give the Azimut Trideck the megayacht look.
Image: Supplied

Not surprisingly, it hasn’t been a year for new yacht launches. We can probably count on one hand the number of significant new models that have come out, but now the industry is starting to manoeuvre out of the dock it has been in and take to the water once again.

Unfortunately for us, that doesn’t mean being able to physically climb aboard a new yacht just yet, but we’re all used to online meetings and reveals, and the yacht industry is no different. So it was that we found ourselves glued to the laptop for the reveal of the new Azimut Trideck, the first three-deck yacht from the brand, which curiously seems to have four decks to it.

It’s an impressive looking thing, with exterior designer Alberto Mancini telling us that it has a “horizontal architecture to create the megayacht look”. That may be true, but what we really want to know is why it’s a Trideck when it has four. Well, Federico Lantero, product marketing director for Azimut Benetti Group, says it’s more of a Trideck+1 because there are cascading decks with an additional sun deck on top. It’s almost like a mezzanine balcony then, rather than a full deck. We think we get it.

Wheels on water: Five of the best yachts from luxury carmakers

Car designers are not only inspired by the yacht industry, they sometimes pen their own
Cars, boats & planes
1 year ago

Semantics aside, it’s a beautiful yacht inside and out. Azimut knows this segment well; after all, it is the market leader in 30m-40m motor yachts, having delivered more than 146 of them in the last decade. The Trideck sits at the upper end, measuring in at 38m and while it has a lead time of about 26 months, one has already been delivered and five more are under development.

It’s also a yacht that breaks with some traditions. Usually the lounge is quite a formal area, following typical design trends that have been in place for years. However, less formal interiors are becoming increasingly popular and this is certainly the case with the new Trideck. It’s full of spaces in which to relax and be yourself with your family, friends and guests. 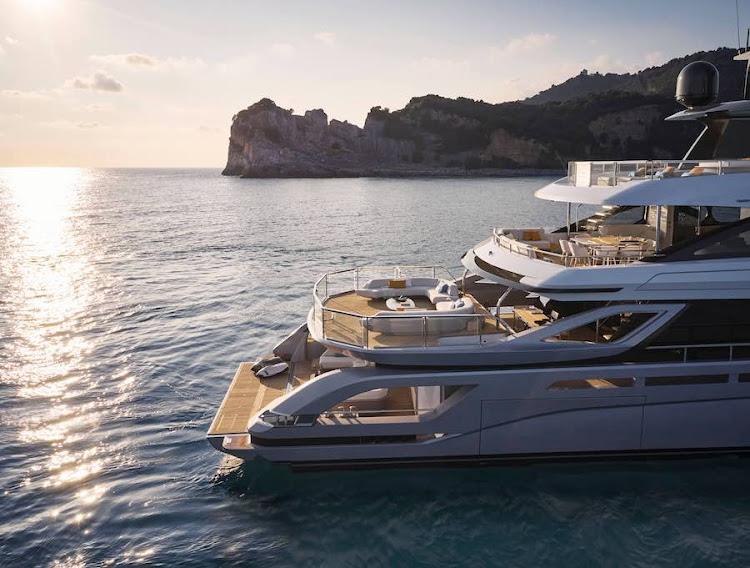 The Trideck+1 design is clear at the rear where three main decks and the additional mezzanine cascade down to the sea.
Image: Supplied

This is all the work of interior designer Achille Salvagni, who wanted to abandon preconceived ideas when it comes to the functions of interior spaces. He set out to provide more purity, to remove ostentation and to connect indoor and outdoor areas more fluidly. He has even designed most of the furniture, aiming to have surfaces that feature more shape, are pleasing to touch and provide an overall ambience of wellbeing.

Continuing the wellbeing theme, the Owner’s Suite even has its own dedicated Wellbeing Area and private balcony. There are four other berths too, creating accommodation for up to 10 people plus six crew, but there is the option to add a VIP cabin on the upper deck to bring the berth tally to six. Indoor and outdoor dining areas cater for every occasion and there are multiple lounges to relax in. There’s also a beach area that not only makes guests feel connected to the sea but can also accommodate various watersport toys.

Towards the front of the yacht there is a yet another lounge, with furniture that surrounds a whirlpool tub for when you prefer to have a dip onboard rather than in the ocean. 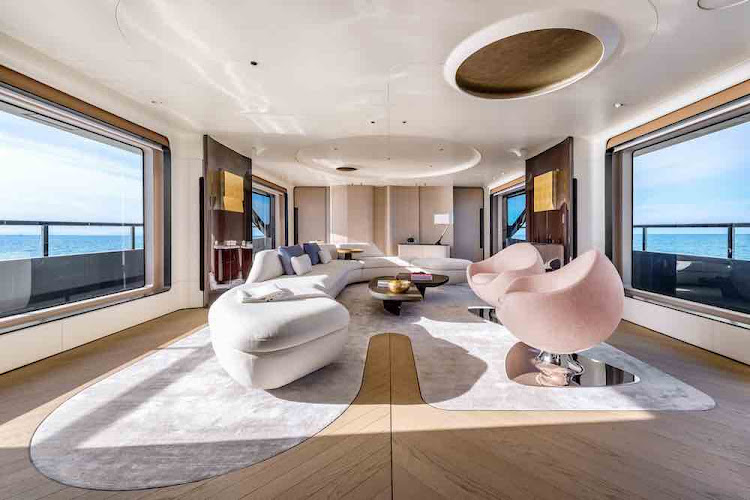 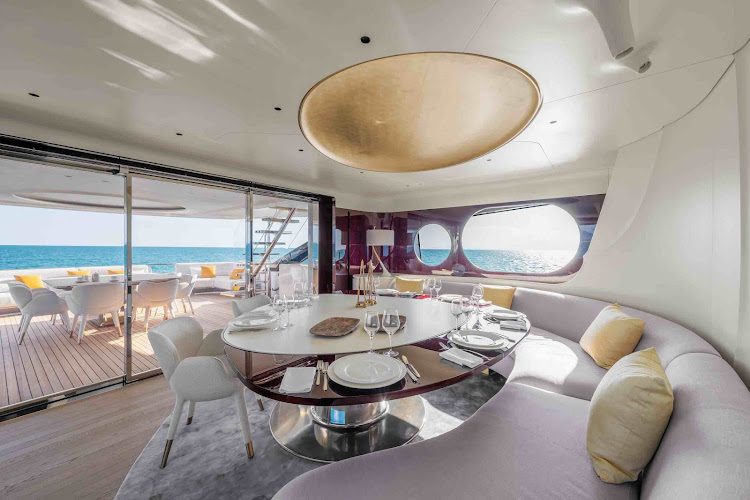 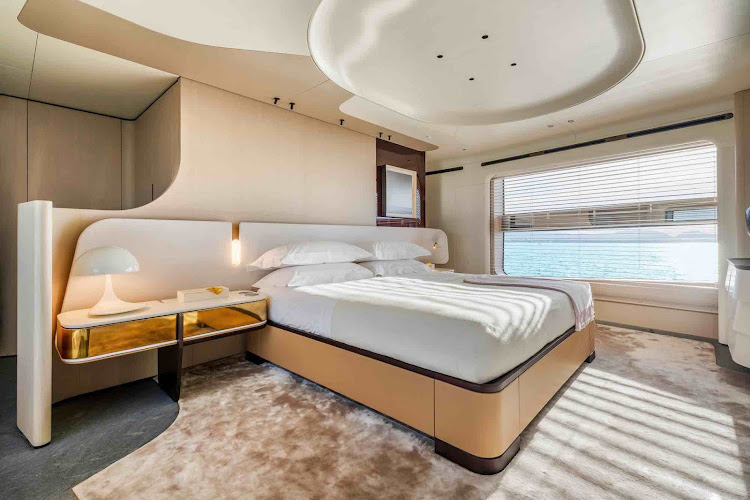 On the face of it, the Trideck is all about style and luxury, but it is also packed with the latest technology. Carbon fibre has been used to significantly reduce the weight of the structure and Azimut’s green efficiency programme, launched in 2015, is showing results, says group CEO Marco Valle. Its second-generation Displacement 2 Planing (D2P) Hull tech has seen it cut fuel consumption 15%. The Trideck also has a Hotel Mode, which uses lithium-ion batteries to provide zero emission silent running of on-board facilities when anchored for up to four hours during the day and eight hours at night.

If like us, you are now dreaming of the idea of climbing on board the Trideck and going away to somewhere exotic, then the team at Azimut have kindly created a walk-around to make us sigh even more. You can find it here, and you don’t even need to take your shoes off.

The global yachting industry is finally getting back on the water as a number of models make their debuts at shows around the world
Cars, boats & planes
1 year ago

Mark Smyth looks at some of the exotic destinations to plan on visiting, and charters worth chartering
Cars, boats & planes
1 year ago

Explorer yachts are a popular choice for those wanting to seek out new adventures
Cars, boats & planes
1 year ago
Next Article
© Wanted 2022 - If you would like to reproduce this article please email us.