Grid luxe: The relationship between luxury brands and Formula One

In anticipation of the 78th Monaco Grand Prix, we line up some notable partnerships between the two industries 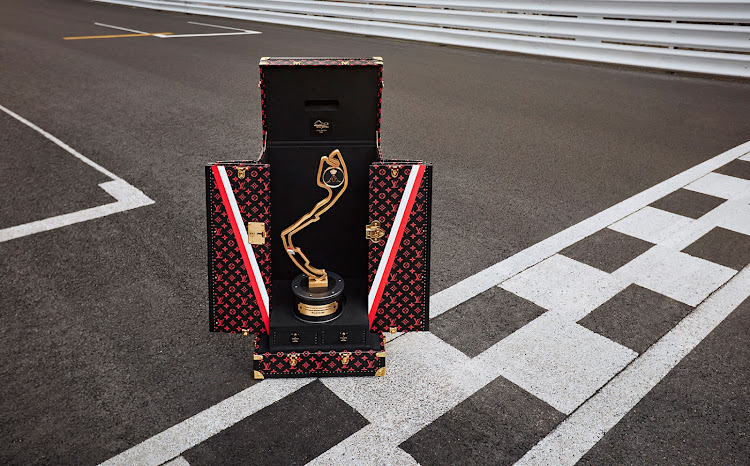 There’s just something about fast cars and the lifestyle that they represent that is intoxicating. Formula One represents the pinnacle in car-racing, and luxury brands have long been associated with the sport. None more so than the Monaco Grand Prix — the oldest, and most prestigious, race on the Formula One calendar. Red Bull’s team principle, Chris Horner, puts it aptly, “Monaco is the big one. It’s where all the glitterati are, you’ve got the boats, the harbour, the celebrities — it just exudes money and glamour”. And for luxury brands, fewer affiliations make more sense.

Last week, Louis Vuitton unveiled its trophy trunk case for the 78th Monaco Grand Prix currently under way. Making its debut into Formula One — and solidifying its (pole) position as the dominant luxury house — the bespoke trunk is the first release from Louis Vuitton’s multiyear partnership with Automobile Club de Monaco.

In this spirit, we briefly highlight some of the notable relationships between Formula One and luxury brands.

Timing is everything in Formula One, making partnerships with luxury watch brands a natural fit for the sport.

Rolex and Formula One’s relationship dates back to 2013, for which, Rolex is the global partner and official timepiece.

“The enduring spirit and rich heritage of Formula One, together with its commitment to bold performance and innovation, align with Rolex’s pursuit of perpetual excellence” aptly describes the partnership, as explained by Formula One. Rolex is unmissable at every Grand Prix, including the official Rolex Pit Lane and associations with Formula One drivers — Sir Jackie Stewart, Mark Webber and Nico Rosberg — further solidifying the relationship.

Hublot’s journey with Scuderia Ferrari began in 2011, becoming the official partner of the racing team in 2012. Recognised as the official watch for Scuderia Ferrari, and the official timekeeper of Ferrari — the Italian duo have celebrated some notable moments together. Most recently, Hublot released a special edition Big Bang Ferrari 1000 GP to commemorate Scuderia Ferrari’s 1,000th Grand Prix, while simultaneously, celebrating Hublot’s 40th anniversary in 2020.

Hublot and Ferrari’s partnership came to an end in December 2020.

Few watch brands are as audacious as Richard Mille, putting the brand at the forefront of exclusivity, and pushing the boundaries of technological innovation. Designed as a “racing machine on the wrist”, the brands commitment to Formula One cannot be understated — after all, Formula One inspired the flagship RM 001 timepiece. Having partnered four Formula One teams — previously Haas and Alfa Romeo, currently McLaren and Scuderia Ferrari — Richard Mille is on track to dominate the sector.

Currently involved in a 10-year partnership with McLaren, Richard Mille celebrated their union with the RM 50-03 watch in 2017 — the lightest mechanical chronograph ever made.

As of 2021, Richard Mille has also partnered Scuderia Ferrari that extends from Formula One to its WEC endurance programmes, Ferrari Driver Academy and more.

TAG Heuer has a long-standing relationship with Formula One, dating as far back as 1971 as Scuderia Ferrari’s official timekeeper — the first watch brand to partner a Formula One team at the time. Today, the brand is the official sponsor and timekeeper of the Grand Prix de Monaco Historique — and is also the official watch of the Formula One Monaco Grand Prix. 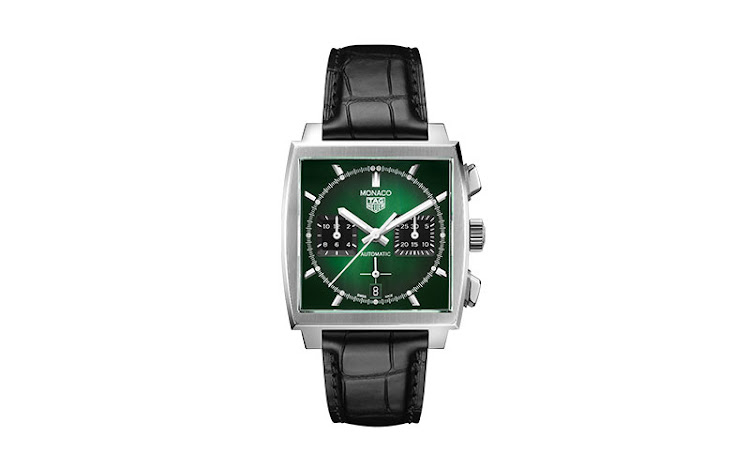 Since 2015, TAG Heuer has been the official timekeeper, official watch, and team performance partner of Red Bull Racing — having just extended their relationship to 2024.

Since 2013, Swiss-watchmaker IWC Schaffhausen has been the engineering partner of the Mercedes-AMG Petronas Formula One team. Their partnership has seen them win six World Championships with Lewis Hamilton, whose namesake Big Pilot’s Watch Perpetual Calendar Edition “Lewis Hamilton” timepiece was released in 2019.

Formula One and Champagne have become synonymous with one another — no podium ceremony is complete without the signature spray celebration. Over the years, various luxury brands, including Mumm and Moët Chandon, have been corked — and in 2017 Carbon was named the official supplier to Formula One’s Grand Prix. 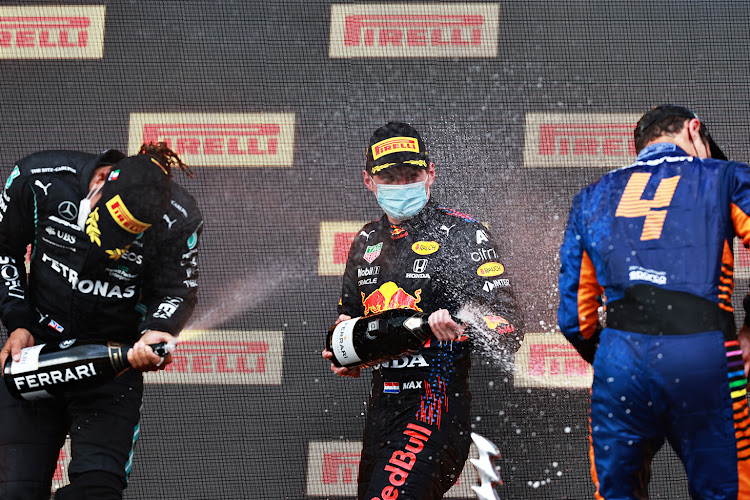 The first Ferrari Trento podium at the Gran Premio del Made in Italy, 2021.
Image: Lunelli Group

Earlier this year, it was announced that Ferrari Trento would be the new official supplier to Formula One, marking a change from Champagne, to sparkling wine on the podiums. “Like Formula One, Ferrari Trento has a long and respected history, and is one of the most-awarded producers of sparkling wines, so is a natural choice as its celebratory drinks partner” a press release explains.

Not limited to luxury watch brands and timekeeping — fashion brand partnerships in Formula One are also ensuring that, off-track, style is as important as speed.

March of this year saw two Italian powerhouses coming together, Scuderia Ferrari and Giorgio Armani. The multiyear partnership will see the Scuderia Ferrari team dressed in Giorgio Armani clothing for all off-track activities. Both drivers, Charles Leclerc and Carlos Sainz, including Scuderia management, will don the Armani badge at events, and a bespoke travel wear range — comprising comfortable navy-blue garments and accessories — will be worn by each team member as they travel around the world during the Formula One championship.

“Today, more than ever, we need to find a way to promote Italian excellence in a dialogue between different areas and disciplines. Ferrari is recognised around the world as a symbol of Italy, and I am proud of this collaboration,” says Giorgio Armani of the partnership.

This is no rookie business. As the Goliath of the luxury-goods industry, it makes sense that Louis Vuitton has made its Formula One debut at the 78th Monaco Grand Prix. 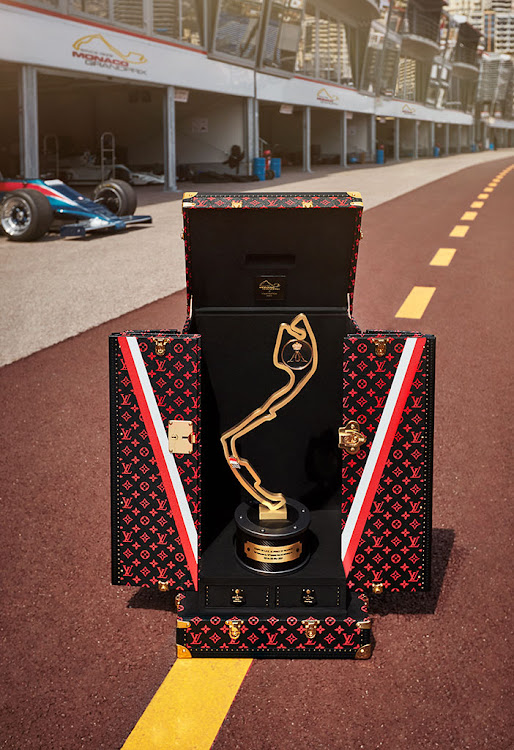 Combining Louis Vuitton’s traditional know-how with the heritage of the Monaco GP, the “unprecedented” Trophy Travel Case is a nod to all that is opulent, glamorous and lush with regards to Formula One.

“We are proud to be associated with the championship and to together start writing a piece of history. The Trophy trunk epitomises ‘Victory travels in Louis Vuitton’ — witnessing the next victories and continuing to carry legends!” read a press statement by Louis Vuitton’s chair and CEO, Michael Burke. With president of Automobile Club de Monaco, Michel Boeri, adding, “We are delighted that the trophy awarding the winner of the Formula One Grand Prix de Monaco can now safely travel in first class.”

Who will take the podium this Sunday, time will tell ... but as the world gathers to watch the most-viewed Formula One event, in the most decadent of settings, expect to see — and I quote the Daniel Ricciardo — “a lot of cool shit in a small place”.

Mad for the collab: Seven standout collaborations from luxury brands

Adidas, Prada, Gucci, they’re all mixing things up. Here are Wanted’s favourite fashion mashups from the past year
Fashion & Grooming
1 year ago

To celebrate the union, TAG Heuer and Porsche release a racy looking new timepiece, the Carrera ‘Porsche’ Chronograph Special Edition Calibre Heuer ...
Watches & Jewellery
3 months ago
Next Article
© Wanted 2021 - If you would like to reproduce this article please email us.

Koenigsegg, the maker of $3 million supercars, ...