Discreet ostentation and minimalism rule in the new second-generation Ghost 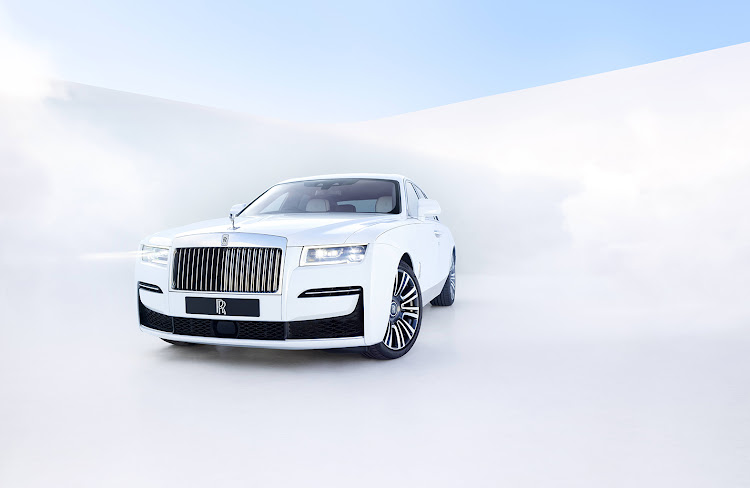 Rolls-Royce wants the new Ghost to flip between being a driver’s car and an excellent chauffeur-driven limo.
Image: Rolls-Royce

The only components that were carried over from the first car were the Spirit of Ecstasy bonnet mascot and door-mounted umbrellas, emphasises Rolls-Royce about the completely new Ghost model.

The latest cruiser is no longer built upon BMW 7 Series underpinnings, and is crafted from the ground up with a new philosophy of what its makers refer to as “Post Opulence” minimalism.

What this equates to is not a less luxurious Rolls-Royce, but one whose structure is crafted using 100% aluminium and discreet ostentation, a less obviously grandiose car using modern technology and clever design detail.

Lunaz has brought this icon back to life with the creation of the world’s only electrified Rolls-Royce car
Cars, boats & planes
1 year ago

The design is purer now, on both the inside and out. In some instances you can plainly see that the minimalism is forgotten though. Take the large grille for instance, which can be optioned with illumination. That’s a fancy touch.

The hallmarks of the "junior" Rolls-Royce are retained and enhanced though. The rearward-opening back doors are now electrically operated like in the Phantom royal barge, and there’s more evidence of an infusion of modern digital tech like the slimmer headlamps with many LED lamps. These are the powerful Laser lights that pierce the dark with 600m of clear forward views.

Look at the new Ghost from both ends. There’s now a very Teutonic sanitisation of tight shut lines, visible sensors, larger surface areas and a tasteful amount of dazzling chrome.

At 5,546mm, the new Ghost is 89mm longer than the model it replaces and its 1,978mm width is 30mm more than the old car, which results in more shoulder room inside while providing enough room for a new all-wheel drive system with four-wheel steering that’s the automotive rage right now.

It’s also constructed using a newer and lighter Planar Suspension System that encourages agility and enhances the brand’s pursuits of a magic carpet ride. The company is serious it wants the new Ghost to flip between being a driver’s car and an excellent chauffeur driven limo. Cameras scan the road it drives on and continuously feeds information to the new upper wishbone damper unit. This data sees instant adjustments to counter any harshness picked up from the road.

Meanwhile an eight-speed gearbox that’s fitted with GPS recognition software detects topographical maps and it anticipates ideal up or down shifts.

The 6.75l twin-turbocharged V12 engine with 420kW is now positioned just aft of the front-axle to enhance handling through a 50/50 weight balance. All of its 850Nm is jolted into action from as low as 1,600rpm for a scintillating take off.

Inside the new Ghost you’ll find those earlier mentioned umbrellas as well as a glowing Ghost nameplate, and the Illuminated Fascia, a new simulation of the brand’s renowned starlight roof headliner with 850 stars spread out on the surface of the newly designed and minimalist dashboard. 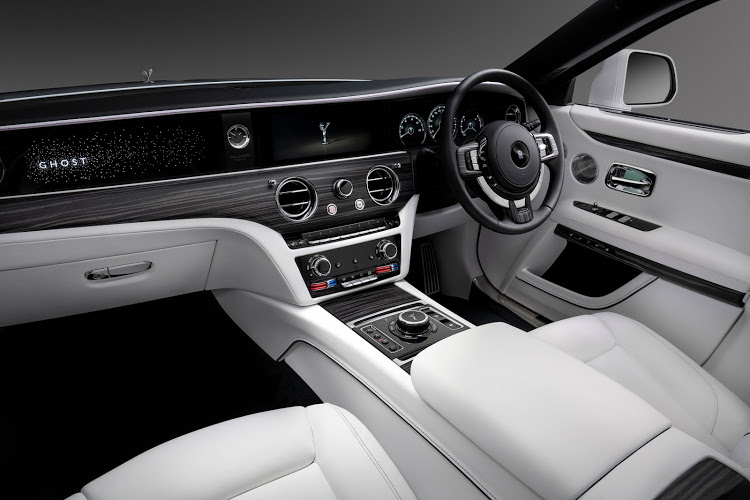 The interior is the epitome of understated elegance, and the new Illuminated Fascia subtly displays a starlight effect on the passenger side of the dashboard.
Image: Supplied / Business Day

While still on the sparkling roof, the new Ghost gets a nifty feature that audiophiles will appreciate. When activated, the 1,300W sound system has exciter speakers were used alongside more conventional cone-type speakers. These exciter speakers are bonded to the surface of an object, imparting vibration directly into it — in the case of new Ghost, the ceiling is in effect transformed into a large speaker.

The new Rolls-Royce Ghost enters the next chapter armed with feedback from its more youthful customers in exactly how they want it to be. You can expect more enhancements as time progresses and perhaps a more powerful and playful Black edition with more customisation options. However, there’s a small elephant in the room. There is zero talk about electrification. We’ll have to wait and see.

Maserati hits the trifecta with its new Trofeo super sedans

The Ghibli and Quattroporte are the latest high-performance models to acquire the 433kW V8 engine
Cars, boats & planes
1 year ago

The limited edition Rolls-Royce hides a secret message that only owners can discover
Cars, boats & planes
2 years ago