With outputs of 537kW, this two-seater is the most powerful production Benz yet 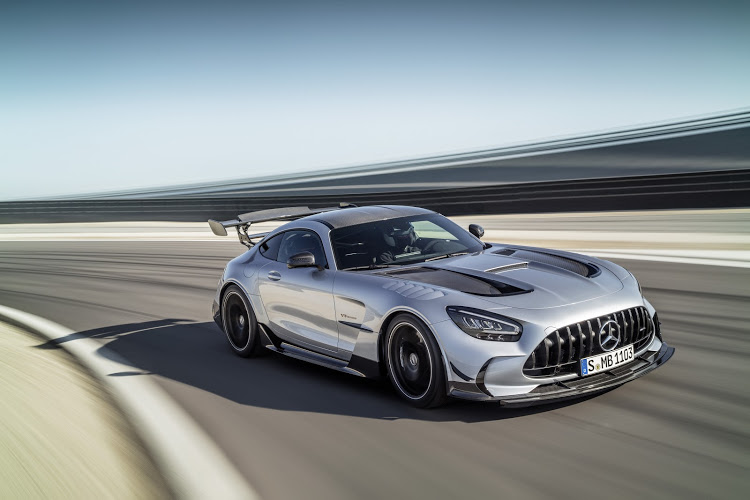 The Mercedes-AMG range has a new king. The GT two-seater supercar has been launched in a Black Series version that becomes the most powerful Mercedes-badged production car to date.

Black Series models are exclusive automotive rarities that have not been developed to gather dust in collectors’ garages, but are road-legal cars made to be enjoyed on racetracks.

Under its elongated bonnet is the 4.0l twin-turbo V8 that serves duty in various AMG models, but has been re-engineered to produce huge outputs of 537kW and 800Nm of torque. The next most powerful Mercedes-AMG GT is the R model, with 430kW and 700Nm.

This ballistic Benz has gone on sale in SA as the first million-rand hatch you can buy
Cars, boats & planes
1 year ago

That places the ballistic Benz in the league of supercars such as the McLaren 720S and Porsche 911 GT2 RS.

Power is transmitted to the rear wheels via the seven-speed AMG Speedshift DCT 7G dual clutch transmission, which is located on the rear axle in a transaxle arrangement for optimal weight distribution, as is the case for all AMG GT models.

The car has suitably angry bodywork and aerodynamic upgrades to match the performance, including a much larger radiator air inlet that stems directly from the AMG GT3 racing car. The carbon-fibre front splitter has two manually adjustable settings: Street and Race, with the latter exclusively for use on racetracks.

Another feature applied from motor racing is the new carbon-fibre bonnet, with two large exhaust air outlets made from black-finished carbon surfaces. The large outlets guide air out of the engine compartment to increase downforce.

At the rear is a large wing with two carbon-fibre aerofoil blades that can be mechanically adjusted to various track conditions. The upper blade has a flap that electronically adjusts to suit the driving situation and selected AMG Dynamics mode — either reducing air resistance to help reach the top speed more quickly, or applying more downforce to improving braking and cornering.

The car rides on the AMG Ride Control adaptive system, which adjusts to suit driving conditions.

• The vehicle is expected to arrive in SA in the second quarter of 2021, with pricing not yet confirmed.

A high-revving four-litre engine maxes out the sound and charm of 718 Cayman
Cars, boats & planes
1 year ago