The Cayman has never been a mine’s-bigger-than-yours type of car. This junior mid-engined Porsche eschews Godzilla-like power in favour of a more focused, purist driving experience.

What Caymans lack in outright grunt, they make up for in alluring nip 'n tuck handling, and charisma. It’s a sportscar that proves you don’t need a gazillion kilowatts to have fun, and there is still no sweeter car to drive swiftly through a twisty mountain pass.

The charisma took a bit of a knock when Porsche decided to replace its six-cylinder normally aspirated engines in favour of turbocharged four-cylinder units a couple of years back when it renamed the car the 718 Cayman. And though the cars made more power than previously, the 2.0l and 2.5l four-potters didn’t holler with the intensity that some felt a Porsche should have.

Heritage Design Edition of the 911 evokes memories of past Porsches
Cars, boats & planes
1 year ago

So the German firm has gone back to its roots with the new range-topping GT4 model of the Cayman. There’s a 4.0l six-cylinder stuffed into the engine bay behind the seats, with no turbocharger to strangle the sound. And it’s only available as a manual, unlike its four-cylinder brethren which offer two- and three-pedalled versions.

Purist enough for you?

It was for me. I wasn’t averse to the four-cylinder Caymans when I drove them at their international launch at the Yas Marina Formula One circuit in Abu Dhabi a couple of years back. I revelled in their responsive mid-engined handling and punchy performance, and thought they sounded pretty okay.

But there’s nothing quite like hearing a flat-six revving at 8,000rpm, which is where the GT4 hits its red line. As soon as I let the tacho needle soar to that lofty level for the first time, the goosebumps on my arms made me understand what this car’s all about. It is to the Cayman range what the GT3 is to the 911.

Bellowing like Axl Rose hitting the high notes in Sweet Child 'o Mine, the car makes you want to explore that red zone even though it isn’t really necessary, as there’s plenty of midrange grunt at lower revs. You do it just for the aural charm of it, and fuel consumption be damned. This is a sportscar after all, and some hedonistic pleasure is not unwarranted.

This high-revving vocality underlies a car imbued with a raw playfulness, made more so by the GT4’s chassis being 30mm lower than the four-cylinder 718 Cayman models. The Porsche Active Suspension Management damping system allows damping stiffness to be varied at the touch of a button.

In its softer mode the ride is firm but not uncomfortably choppy, but this was a car that really needed to be explored outside of the commuting grind, so we took it to Gerotek for acceleration tests and a few laps around the handling circuit.

And ah, what a joy it is to drive. The car playfully zips through corners as only a mid-engined, rear-wheel drive car can. 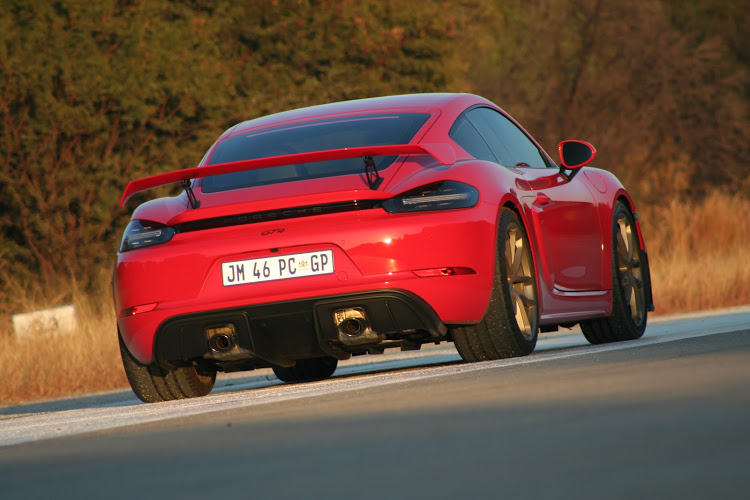 There’s nothing quite like hearing a flat-six revving at 8,000rpm, which is where the GT4 hits its redline.
Image: Denis Droppa

It rides on matte gold 20-inch wheels wearing sticky race-inspired Michelin Pilot Sport Cup 2 tyres, with the driven rear wheels wearing wider rubber than the fronts, and their grip is prodigious. The car’s clinginess is enhanced by Porsche Torque Vectoring (PTV) with a mechanical rear differential lock, which helps prevent the tyres being smoked during robust cornering.

Even so, the tail wants to whip out when you get too frisky with the throttle out of tight bends, but it’s all balanced and controllable. On a wet skidpan with the car’s electronic traction nannies switched off, I got the Cayman into an extended power slide that I felt it could have held all day.

A fixed rear wing presses the car into the road about 20% harder than the previous-generation GT4, and helps the new car snip more than 10 seconds around the Nürburgring Nordschleife.

The six-shifter snicks with precision and the power’s punchy in a linear and progressive way, without the sudden boost of turbocharged engines.

In a straight line the GT4 zoomed from 0-100km/h in 5.2 seconds in our high-altitude test, but Porsche claims it will do the feat in 4.4 seconds at sea level. In Gauteng the 2.5 turbo Cayman S will probably outsprint it in a straight line, but that’s not what the GT4’s all about. It’s about the sound and the general pulse-quickening demeanour, and it’s more than fast enough to be fun, as its 304km/h top speed attests.

What I like most is that unlike more powerful sports cars where the throttle often needs delicate inputs to prevent an unwanted pirouette into the roadside scenery, the Cayman lets you enjoy the invigorating pleasure of booting it, pedal to the metal. Yes ye horsepower hounds, less power can mean more fun.

The GT4 automatically blips the throttle on downshifts to provide a shot of racing-style character, but you can switch off this feature and choose to do it yourself if you’re versed in the heel-toe technique. 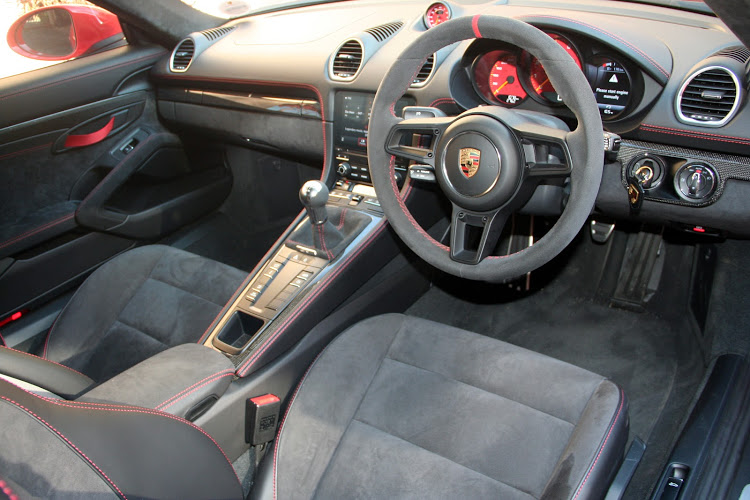 Inside, the car’s sporting glamour is laid on by carbon fibre trim, red-faced analogue clocks, and a generous helping of Alcantara throughout — including on the steering wheel and chrome-Alcantara gear knob. Interior door handles are replaced by red pull cords.

For attempting racier pursuits, the GT4 also comes with the option of a Clubsport package which includes a rear steel roll bar, a hand-held fire extinguisher and a six-point seatbelt on the driver’s side. Porsche Ceramic Composite Brakes (PCCB) are also on the options menu.

Priced at R1.5m in base form, the GT4 is really excellent bang for buck, and worth the cost of entry for that stirring engine sound alone.

The 718 Cayman may be Porsche’s junior sports car but there’s little that feels “lite” or underendowed about the GT4.

What it may lack in outright power, it makes up for in sound and charm and all-round driver-pleasing demeanour. It’s a car that leaves skidmarks on your soul.

The hybrid hypercar from Maranello is brilliant, incandescently quick, bewildering, and eerie, all at the same time
Cars, boats & planes
1 year ago