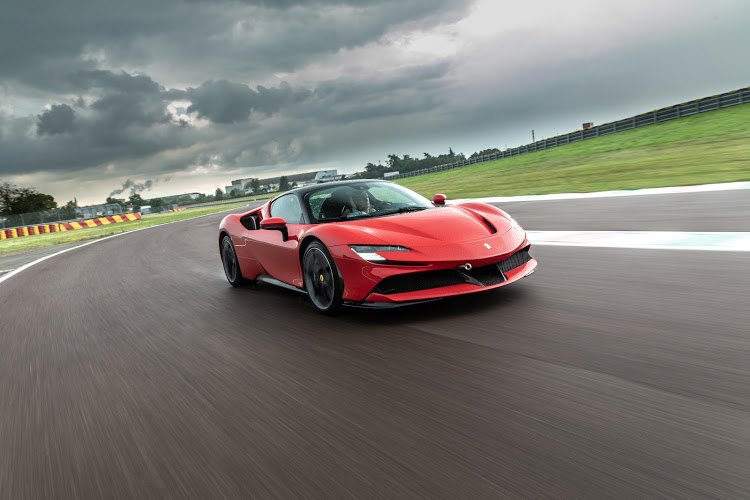 It is brilliant, incandescently quick, bewildering, and eerie, all at the same time.
Image: Supplied / Business Day

Even two years ago, it would have been impossible to imagine Ferrari putting a hypercar such as the SF90 Stradale into full, unlimited production. But here we are, with four power-packed motors, 25km of electric range, devilishly complicated electrical workings, astonishing speed and an amazingly docile manner.

It’s brilliant, incandescently quick, bewildering, and eerie, all at the same time.

Any Ferrari with just one motor is expensive enough, so there are no monetary surprises when they deliver four. The layout is unfamiliar, with two electric motors up front, and another in the rear, between the heavily updated twin-turbo V8 and the new eight-speed, dual-clutch transmission.

Six ultra-luxe supercars to look forward to in 2020

Here is a list of the most anticipated sports cars expected go on sale this year
Cars, boats & planes
2 years ago

There’s the usual Manettino on the steering wheel, governing all of the skid-control through wet, sport, track and qualifying modes, but they now need to oversee the power electronics as well. Then there’s a second Manettino on the steering wheel, but it’s touch-operated and controls the powertrain, ranging from EV mode, to Hybrid, Race and Qualifying.

The SF90 Stradale is the most complicated, futuristic collection of whizzy, fizzy, whirring bits Ferrari has ever piled together beneath one skin. It’s Ferrari laying down a marker that validates its continued supply of high-speed supercars into a cleaner age — without sacrificing performance. 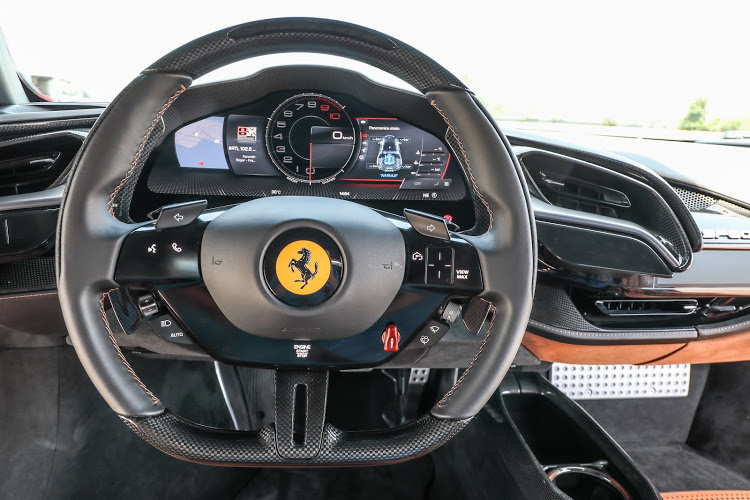 There are four motors in this car. Four.

Each front wheel has its own 99kW electric motor, and that has quite staggering implications for the way the SF90 Stradale attacks corners. There is a mid-mounted biturbo V8 petrol motor and, stuffed between that and the new eight-speed dual-clutch transmission is another electric motor.

So, you want grunt? How’s 736kW of 4.0l V8 turbo grunt? Thing is, it’s impossible to confirm how much torque the SF90 Stradale can deliver at any one time. The power and torque outputs are limited purely by how much energy the battery can discharge to its motors at any given moment, so that peaks at 162kW, but far more torque.

The tech story doesn’t stop there, because this is the first Ferrari to do a passable impression of an electric car, even for short bursts at up to 130km/h (even in Qualifying mode, they shut down at 210km/h).

The chassis is a development of the F8 Tributo’s underpinnings, sharing its 2650mm wheelbase. The result leaves Ferrari boasting that its charger has 20% better bending stiffness and 40% more torsional rigidity than the Tributo, with no weight cost.

The SF90 Stradale is the most bipolar car I’ve ever driven. It’s capable of the gentlest, quietest feats of commuting you could ever imagine, yet its 6.7 second blast to 200km/h is a full second quicker than that of the LaFerrari. It is the first Ferrari whose start button doesn’t trigger a theatrical rasp of a V8 or V12, followed by an intentionally uneven idle for even more drama.

Unlike any other Ferrari, this really has to be reviewed as two separate cars, because it is, and then they merge together seamlessly.

And the SF90 Stradale is driving as a sheep dressed in a T-Rex’s clothes. The instant torque of the e-motors is a welcome addition to urban life and the ride is firm and direct, but never hard or aggravating. It can do this all the way up to 130km/h (we tried and can confirm), and it’s a passable short-range EV.

And it’s so easy to drive that you could flick the Manettino into Wet mode and send a rookie driver to the shops in it. The other modes are different. The Hybrid mode listens to what mode the manual Manettino is in and decides its mix of power to suit your mood.

It’s happy as an electric car, too, and it’s shocking to finally hear, when you dab the accelerator pedal a little more firmly, the bigger V8 snap into life, barking and tearing at the air, with a heavy, breathy rasp on the intake and whip-like rev changes.

The Race and Qualifying modes are beast modes, with the V8 running the whole time for both speed and to charge the battery. It’s aggressive enough in Race mode, but Qualifying mode is eye-popping. It’s hard to remember a Ferrari backrest that’s ever had to take this much punishment and you’d better love corners, because you’ll be meeting a lot of them.

On the road, the SF90 Stradale in Qualifying mode obliterates anything between corner exits and braking points and it’s so fast that you never, ever have respite. 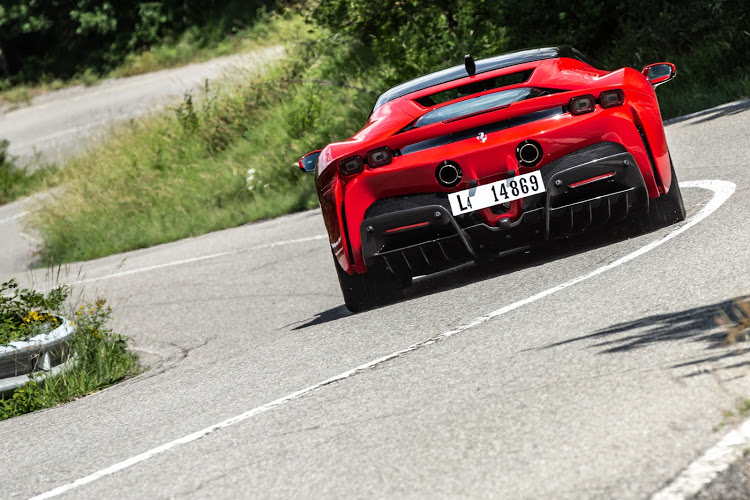 The most powerful steed from Ferrari promises a 340km/h top speed and 0-100km/h in 2.5 seconds.
Image: Supplied / Business Day

There is simply a wall of acceleration, all the time. Yes, there’s the V8 bellowing deeply behind you, but there are no torque holes, no pause. It’s a horizontal hydraulic press of phenomenal force every single time you sniff the accelerator.

I’d assumed that it would excel on the way out of corners, because of its torque-vectoring front e-motors. And it does. The shock is the way the e-motors work from the turn-in point to the apex of any corner you like. Even on blisteringly quick bends. They do their work to navigate the nose precisely, unambiguously where you want it to be. Point it, turn in at ludicrous pace and the front e-motors just sort out the physics and engineering for you.

You end up flailing about for ways to make it run out of grip, and even when it does, it’s never a drifting loon like an F8 Tributo or a 488 Pista. It’s more like a German than a passionate Italian, and it prefers to slide only when it adds pace, rather than adds fun.

The electric power steering delivers brilliant levels of heft and feedback, the fly-by-wire brake system feels seamless, the suspension walks and soaks up the worst of awful roads with disdain.

Apart from fiddly navigation around the new, coloured and curved instrument cluster, the SF90 Stradale is a reality-warping distortion field, more than a car. The thing is, it just does it all so very easily, never feeling flustered or bothered about anything either you or the road throws at it.

Superfuturedesign will transform your garage into your private showroom