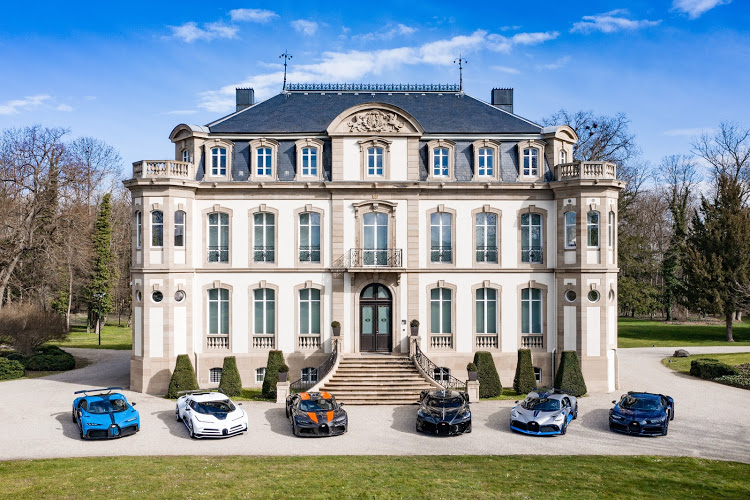 French sports car brand Bugatti is one of the many car firms around the world that shut their factories due to the coronavirus, but before going into lockdown it rolled out all its exclusive supercar models for a photo shoot at its Molsheim headquarters.

The one-of-a-kind rendezvous of Bugatti hyper sports cars included three Chiron models, and three members of Bugatti’s hand-built collection built in either small runs or as one-offs: the La Voiture Noire, Divo and Centodieci. The six cars pictured in front of the Chateau St Jean in Molsheim are collectively worth R626m.

Even in the rarefied Bugatti world, there are sports cars that stand out above others. Such a machine is the La Voiture Noire (the black car), created as a one-off for an unnamed enthusiast. Built on the occasion of Bugatti’s 110th anniversary last year, it’s inspired by the iconic Bugatti Type 57 SC Atlantic of the late 1930s.

At €11m (R208m) the La Voiture Noire is the world’s most expensive new car and a true unicorn in the automotive realm. Being a one-off rarity, it is likely to appreciate in value.

Only 10 units of the Centodieci (Italian for 110) will be built by Bugatti. The hyper sports car pays homage to the Bugatti EB 110, which, when presented in 1991, was considered the fastest and most extraordinary supercar of its time.

The exclusive reinterpretation delivers 1,193kW of power and costs €8m.

3. BUGATTI DIVO — made for corners

It’s the most agile and dynamic car Bugatti has yet created, optimised for lateral acceleration and downforce. The Divo is also exclusive with only 40 to be built at a price of €5m apiece. Its power train is the iconic 8l W16 engine with 1,118kW.

With the Chiron Super Sport 300+, Bugatti set a new world speed record in 2019. Using an up-powered 1,176kW version of the Chiron’s W12 engine along with an aerodynamically optimised body, it became the first production car to break the magical speed threshold of 300 miles an hour (just over 490km/h).

To mark the occasion Bugatti built 30 vehicles of the Chiron Super Sport 300+ for a price of €3.5m per unit.

The French carmaker calls this the purest Bugatti yet. The newest member of the Chiron family, the Pur Sport is an uncompromising hyper car with a higher-revving W16 engine and chassis tweaks that push the limits of driving dynamics further.

With a top speed electronically limited to 350km/h, the Chiron Pur Sport costs €3m and only 60 hand-built examples will be produced.

The Chiron Sport is what Bugatti calls its hyper sports car for every day, blending luxury and sportiness. It’s lighter than the regular Chiron (using carbon fibre windscreen wipers among other weight-saving features) and has slightly stiffer suspension, but still comes packed with luxury. The hyper sports car is yours for €2.65m.

A retro special-edition Bugatti inspired by the EB110