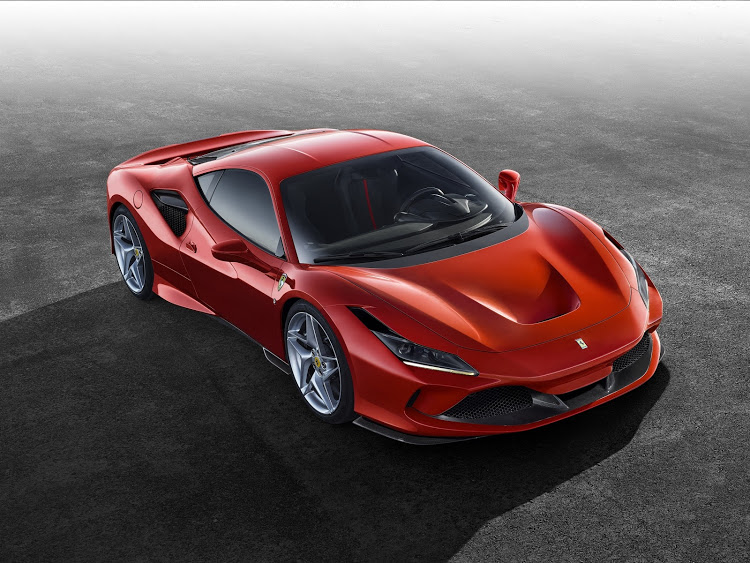 The F8 Tributo replaces the 488 GTB and has been created as the tribute model to Ferrari’s award-winning twin-turbo V8 engine.
Image: Supplied

Maranello, Italy: Can’t see a thing outside the cockpit of the F8 Tributo. The Apennine mountain passes have been rendered guesswork, with a sponge of fog re-enveloping the sleek shape the instant it passes, giving a free wind-tunnel data set for anybody brave enough to follow closely.

I have Ferrari’s newest mainstay in its Sport mode, with the dampers running softly to soak up the bumps and the slick surface. And then, unseen, we hit it. The crest drops away like a crater’s edge even as the car is still cornering, under full power.

In a normal rear-drive car this means the sort of trouble only competition-standard drivers catch, with the back end spitting sideways before most skid-control systems could catch it. It would still be a significant scare in an all-wheel drive car.

The 340km/h sports car is a tribute to the multi award-winning V8 turbo engine
Cars, boats & planes
2 years ago

An F8 Tributo shrugs it off with just a tiny downtick of its V8 soundtrack, and then rockets forward again. No histrionics. No heart-in-the-mouth. No fatalities.

That’s the beauty of the F8 Tributo. It isn’t that Ferrari made it faster than the 488 GTB — a car it is effectively a facelift of. That car, after all, was plenty fast enough for mortals.

The beauty of the F8 Tributo absolutely is that it’s faster than the 488 GTB and it’s so much more fun to drive, more accessible, more intuitive and much friendlier in real-world trouble spots.

It’s like they always had the crazy curve all figured out and now they’ve finally filled in a lot of the sensible curve beneath it.

Sure, the McLaren 720S is a fraction quicker and the Lamborghini Huracan is blessed with that engine and sound, but neither of them are the rounded, polished gem the F8 Tributo has become.

How did they manage this from a 530kW beast of a thing with just 1,330kg of dry weight to shove around? Well, that’s another story.

Ferrari already upgraded the 488 GTB once with the harder-edged Pista. It felt like the F8 Tributo would simply score the Pista’s crankier powertrain, but it has all been taken further than that.

Now the engine has 50 additional horsepower, another 10Nm and it’s 18kg lighter than the 488 GTB’s motor — and that from a motor that won the International Engine of the Year award five times.

So it’s not only fast, but it’s so much lighter inside that it reacts to the accelerator pedal with think-it-quick power delivery.

It hooks the V8 up to a mega-slick seven-speed dual-clutch transmission that’s soft enough to use every day and hard-core enough for track days, even with dedicated hard-core drivers.

The F8 Tributo scores an F-derived S-duct, and a blown rear diffuser at the back with adaptive flaps that are electronically controlled, for 5% less drag for 10% more overall downforce.

There have also been upgrades to the side-slip control (accessed by a simple flick of the steering wheel-mounted dial) that lets the driver hurl out the most lurid slides possible without spinning, thanks to a combination of torque vectoring and stability control. It can work in both Race and CT-off modes, with Ferrari estimating it lets the F8 Tributo punch out of corners 6% harder than before.

Then there are the weight savings, with Ferrari’s first lightweight Lexan louvred rear screen since the F40, pulling it down to 1,330kg dry. Optional carbon-fibre alloy wheels chop another 10kg from the overall weight.

And here are two critical tweaks: the braking and steering systems have been overhauled for added fun, rather than added power or speed. And that’s a very un-Ferrari thing to do.

The interior is essentially new, with new vents that feel a bit brittle, and a new touchscreen sliver for the passenger (which is a touch I’ve always loved) and new graphics for the instrument cluster. 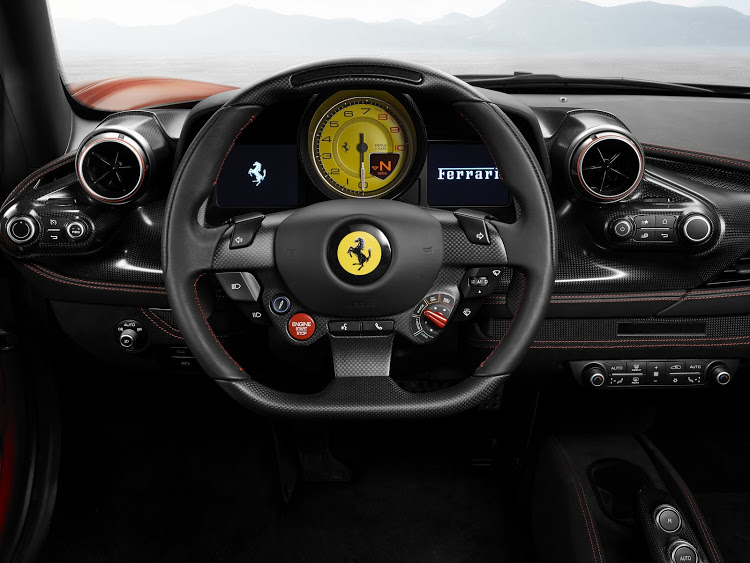 The interior is essentially new, with new vents and new graphics for the instrument cluster.
Image: Supplied

And for all the pace beneath the sleek skin, it can ease away with surprising delicacy. You could send your grandmother to the shops in it.

It’s simple and calm and easy around town, soaking up bumps and undulations, climbing over speed bumps and with terrific forward vision making it a doddle at intersections.

But the joy becomes unfettered with speed, and blasting away in launch control will fill the cabin with giggles of joy and absurdity. It’s terrifically ridiculous how fast this car is, with that V8 bellowing, then softening as the turbos take over.

The rear end grips in a way that two tyres simply shouldn’t be able to, and hurling the gorgeous sculpture forward like a piece of ordinance.

Keep pulling gears at full throttle and the acceleration never seems to dim, but the violence is something that you almost get used to. Each downshift comes with a sharp crack as the computer auto-blips the throttle on the way down the box. 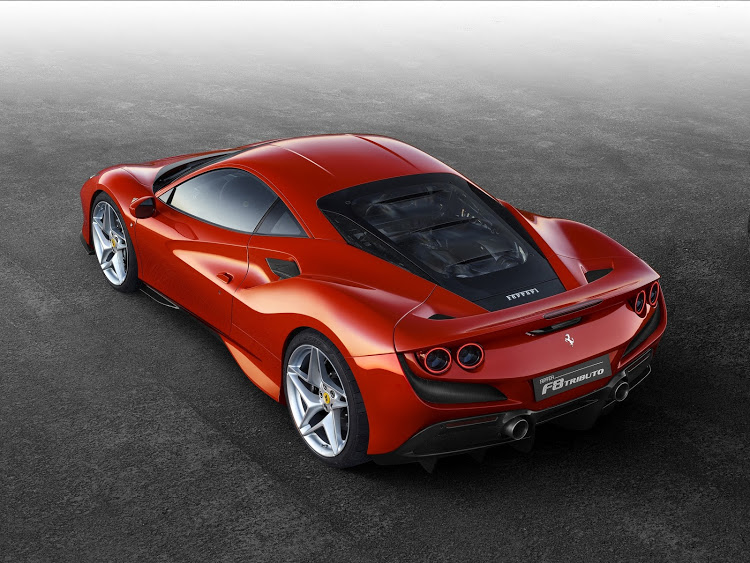 The beauty of the F8 Tributo is that it’s faster than the 488 GTB and it’s so much more fun to drive, and more accessible.
Image: Supplied

For all that, the engine isn’t the highlight of the F8 Tributo. The highlight is how everything else about the car has evolved to keep that engine the sort of control that an average driver can exert.

It starts with the brakes, really. Carbon-ceramic by birth in all Ferraris, the brakes now have feel, rather than binary effectiveness, and you can use that at will, from easy stopping around town to delicate modulations down from 300km/h.

Shrinking the wheel and dialling back the assistance levels have made the steering come alive in a way that only Porsche used to do.

What a gloriously conceived and executed machine the F8 Tributo is. The third chop of the 458’s tree is by far the best yet, with speed, accuracy, forgiveness and unadulterated driving joy, as well as the traditional theatre and drama. It is faster, but more approachable than ever before and it even has the gall to ride beautifully. What’s not to love?

The Ferrari F8 Tributo is available to order in SA now at a price of R5.5m.

The sexy new McLaren GT packs in comfort and space

The supercar has launched its roomiest and most comfortable sports car yet
Cars, boats & planes
2 years ago

Only 63 units have been produced — commemorating the company’s founding year of 1963
Cars, boats & planes
2 years ago