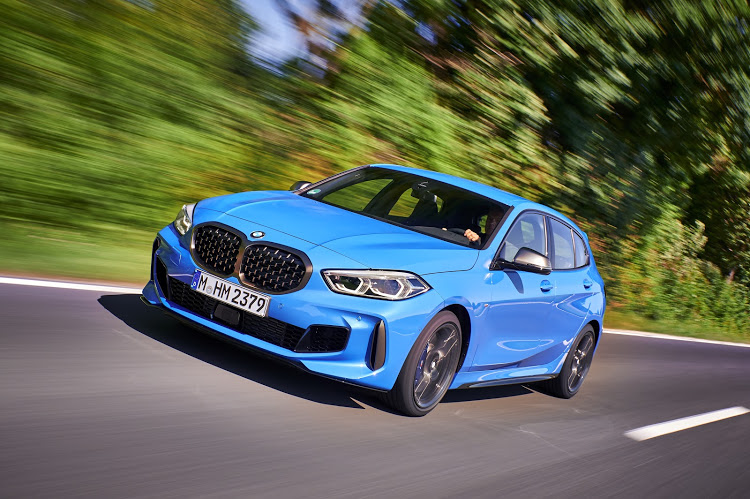 Three letters — UKL. They probably don’t mean much to you. No, it’s not UK Leaving, but it does involve the UK.

It’s UK Longitudinal and is the name of the platform that underpins the Mini. It’s also beneath the BMW X2 and the 2 Series Active Tourer which is no longer in SA.

It’s a front-wheel drive platform and this is where BMW enthusiasts usually have to sit down for this type of shock news — it’s now the architecture beneath the new 1 Series.

Is this really the sort of development that will have BMW fans spilling their Weiss beer? Back in 2010, the company conducted a survey of 1 Series owners and four out of five thought their car was front-wheel drive anyway. For the other 20%, BMW has put a great deal of effort into the engineering to make things feel more a bit more, BMW. Or to put it another way, they’ve built the first BMW Golf.

It’s the third generation of the 1 Series and, according to Peter Henrich, senior vice-president of product management at BMW, it has been completely re-worked and re-engineered. There are significant increases in equipment, systems and connectivity all of which, he says, will enable customers to “interpret the 1 Series in a new way".

Interpreting it in a new way starts with the styling. Henrich says that emotion remains key for BMW and that’s evident in the way the one bulbous styling of the model has been replaced with more design lines, more curves and, in the M135i, more attitude. There’s even a First Edition model with a wing-like rear roof spoiler and enough appendages to make it easily mistaken for a Mercedes-AMG A45.

The grille is bigger although thankfully not as big as some BMW has introduced recently and the rear is much more pronounced, allowing for a 20l increase in boot space, although it still seems a little small.

Inside, there is a stronger focus on the driver but also the introduction of new materials and trims to create separate areas within the car and reduce that claustrophobic feeling in the rear of the previous generations. That’s further helped by the new architecture, with the removal of the transmission tunnel to the rear axle improving legroom for the middle passenger. 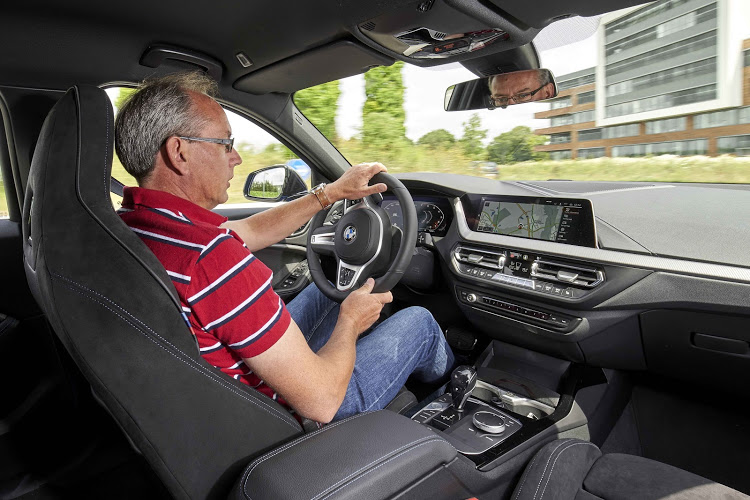 The interior gets lots of the tech of higher models.
Image: Supplied

It’s all about making it a younger and more modern car say its designers and that also means more connectivity and more digitalisation. There’s a digital instrumentation screen and a brilliantly crisp head-up display (optional on base models) as well as a new touchscreen infotainment system using BMW Operating System 7.0. This means it has things like gesture control, BMW Intelligent Personal Assistant, over the air updates and the ability to check the weather, stream your favourite music service and even check out the news.

It’s all very modern BMW, but in its entry-level vehicle, if you discount the Mini. But for the 20% of buyers, what about the dynamics?

The 1 Series gets BMW’s ARB traction control system, first developed for the electric i3S, which controls wheel slippage. It dramatically reduces the traditional front-wheel drive torque steer although it’s still there on occasions when you push hard.

I only had a limited time in an entry-level version and it was the 118d which is not currently planned for SA (the 120d is expected in SA in 2020) and while the engine was rather lacklustre the handling was quite good. One engineer told us that they spent a great deal of time perfecting the best all-round settings on the lower spec versions and it shows, because they were easily the most comfortable.

It was the M135i I spent the most time in and here is where the enthusiasts will find the most tech and engineering to persuade them that they need not be disappointed about the switch in architecture.

It’s xDrive all-wheel drive and has a front wheel bias but BMW has tried to make it less obvious. There’s a Torsen limited-slip differential on the front axle which can supply 39% locking under full load and 26% on the overrun. The slip controller has been moved to the engine control unit, which BMW says transfers information three times quicker than before and will result in 10 times faster driver perception of the car’s reaction.

There’s also Launch Control and Performance Control in the dynamic stability control system as well as increased body rigidity across the range. Suspension changes include an advanced multilink rear axle on all models and the availability of three suspension choices: standard, M-Sport (10mm reduction in height) and adaptive damping. The M135i suspension has also been specially tuned.

For the first time there is the option of three different transmissions: a six-speed manual, seven-speed dual clutch or an eight-speed automatic.

Then there’s the engine in the M135i, the most powerful four-cylinder unit BMW has ever produced. It generates 225kW and 450Nm and the company claims a 0-100km/h time of 4.8 seconds. 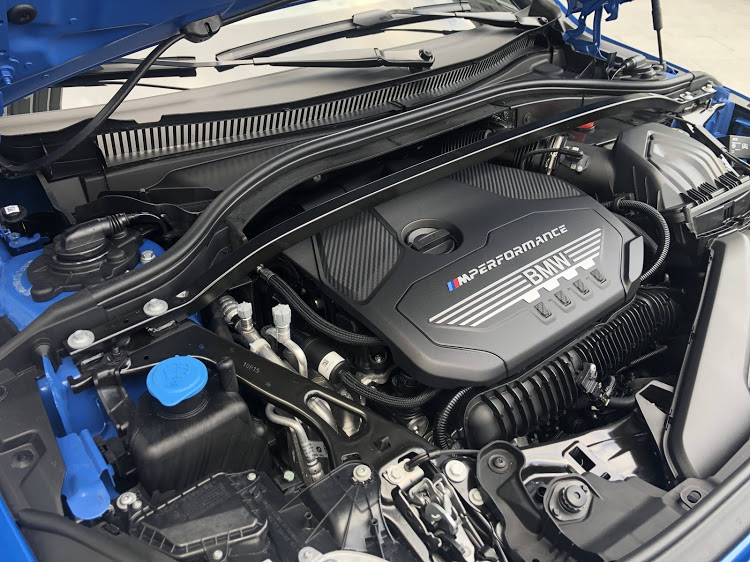 The engine in the M135i is the most powerful four-cylinder BMW has ever produced in a road car.
Image: Supplied

What does all of this translate into? In the lower models it means a much better all-round car, with better interior space, better equipment and a far better level of ride comfort.

In the M135i it means a car that handles almost like a rear-wheel drive car. There’s no escaping the front-wheel drive architecture and the nose can feel light if you push hard in the corners while the wheels still scrabble slightly if you push hard. But this won’t be an issue, for 80% of buyers anyway.

What might be more disappointing though is the sound. BMW doesn’t try to match the brutal growl of a Mercedes-AMG but even with an active exhaust, the M135i sounds a bit too muted. Still, if it’s sound you want, you can always add an Akrapovich exhaust to wake up your neighbours. 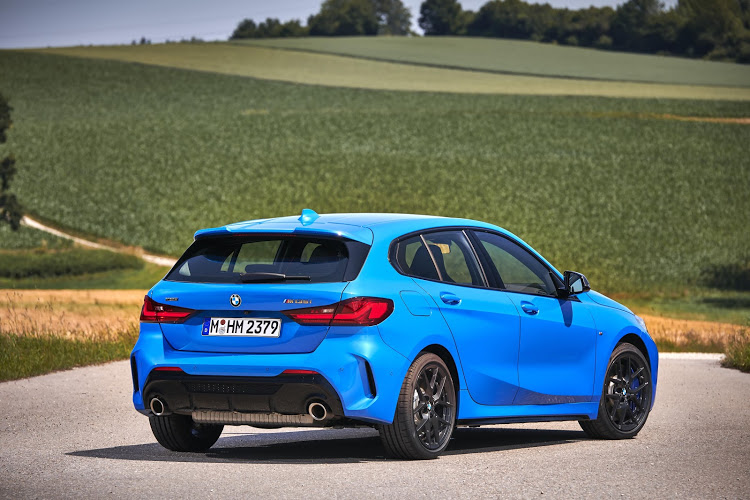 The rear, even on the M135i, is a little generic in its design.
Image: Supplied

Overall, the new BMW 1 Series is a far more composed vehicle than before, feeling lighter, more nimble, with great steering and decent response. The interior feels more airy, there’s more space, loads of digital stuff and connectivity and while from some angles it does look a bit like a new Ford Focus, it’s a very different vehicle to previous generations.

The problem is that the new BMW Golf costs a great deal more than its Volkswagen rival and is only marginally better in its build and composure. Worse is that the Golf R beats the M135i in the crucial 100km/h sprint.

The M135i is a better car, but it’s harder to say the same at the lower end of the range. Here the price difference means that while you’ll be very proud of your new BMW, it’ll be your Golf-driving mates buying the drinks.

The electric concept bike is instantly recognisable as a BMW with its cooling elements mimicking the look of the iconic boxer engine
Cars, boats & planes
1 year ago

Everyone is talking about the BMW X7 grille, which BMW proudly says is the largest of its kidney-shaped kind in history
Cars, boats & planes
1 year ago

Roadsters are all about the love of the drive and the latest BMW Z4 is no exception
Cars, boats & planes
2 years ago