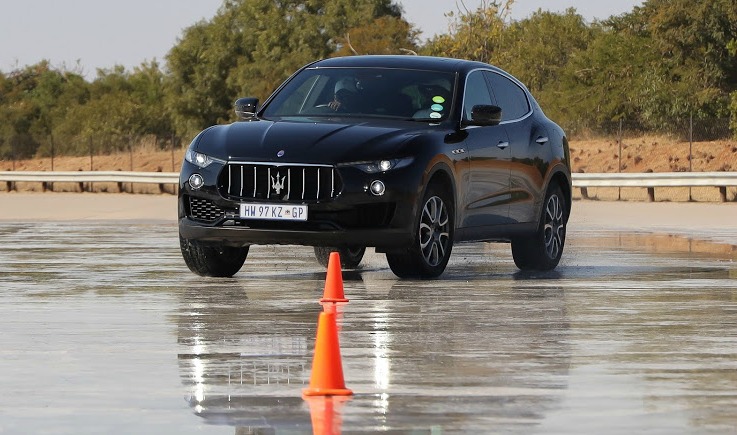 A timed gymkhana is an opportunity to test the wet driving safety in the Levante.
Image: Supplied

Sitting comfortably at the rear of a black Levante SUV as it sped towards Gerotek, memory tells me this is a first-time privilege of being driven in a Maserati.

My last and most recent encounter with a Mazzer was a Levante Diesel, which was on test as a pre-owned buy. I drove that all day. Then there was the Gran Coupe MC Stradale, circa 2013. I insisted on piloting that one too.

My driver is not being intimate with the Levante’s throttle. It’s group colleague and Sunday Times Motoring editor Brenwin Naidu at the helm. He is an accomplished driver and, understandably, the beautiful bellow emitted by the petrol V6 engine found in the Levante S Gran Sport we are travelling in is egging him on, hard.

Whizzing along the icy roads of Italy in a Maserati SUV

A Maserati in the snow? This trident sledge handles pretty well, and is a lot fun, writes Mark Smyth
Cars, boats & planes
4 years ago

Part of the reason we are converging at Gerotek, SA’s premier vehicle testing centre on the outskirts of Pretoria, is so Maserati SA can demonstrate its newly launched and globally run Master Maserati Driving Course — essentially an advanced driving course but presented in premium indulgence as expected by clients of the brand.

The experience is standard fare to Ghibli, Levante, Gran Turismo and Quattroporte owners — cars in the current line-up. Unlike some of the driver classes from other brands, for non-Maserati owners the course is by invitation only. You’d have to satisfy Maserati’s strict client profiling system. If you’re not on their radar you can’t discover what Maseratis are about and what they’re capable of.

What the Levante is able to do, as I learn in the first lesson of the day, is that the Hill Descent Assistance programme in the SUV works in two directions. First, tackling a forward steep gradient you prep the car by pushing a few buttons before relinquishing all downward braking duties to the vehicle.

Retardation is automatic. You can also choose the speeds at which the car slopes down via a toggle on the left-side stalk. Should you need to retreat back down, the same Hill Descent tech works in reverse.

Safety is paramount in this exclusive course, the aim of which is to hone the driving skills of Maserati enthusiasts on the road. The next exercise of the day sends the Levante fleet onto Gerotek’s oval track. 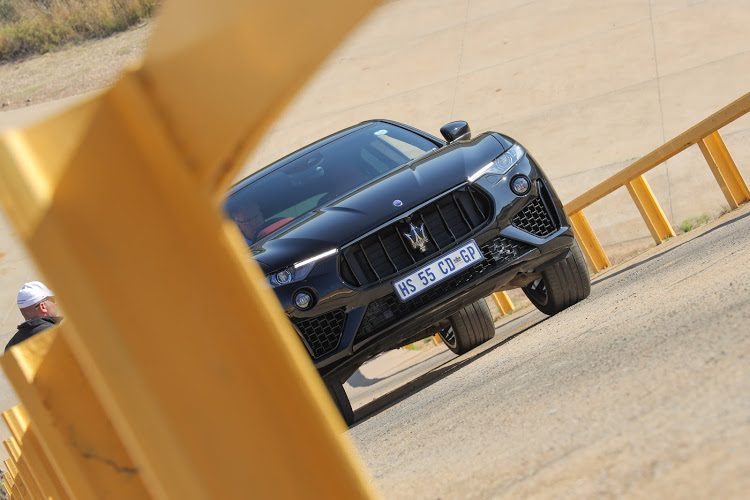 We don’t go flat out right away. Basic principles in understanding braking distances at different speeds are demonstrated — an exercise which also asserts the stopping power of the cast iron and aluminium Brembo brakes. Then we are let loose to flex the soulful sounding engines to near their 264km/h terminal velocity on the oval.

Despite looking quite straightforward, ovals can be a tricky undertaking. Because you are mostly flat out on the throttle, this requires the vehicle to be driven at speed at the top-most lane, right beside the steel barriers. I don’t have the herculean bravery needed for such antics. It’s an early tap-out for me. Those in our group made of sterner stuff go around more times. It’s a chance to watch from the sidelines the beauty of the Levante in flight.

Midday is signalled by the rumblings of a hungry tummy but it’s not time for grub just yet. First we descend on the skid pan for a bit of slippery driving fun. A timed gymkhana is laid out and this is an opportunity to test the wet driving safety in the Levante. Its behaviour is typical of the segment. It lumbers about while its stability electrics and AWD system work for optimum traction to keep it on track.

I’m satisfied that it’s a public protector but to have any chance of posting a good time on the day, the traction systems must be disengaged. The Levante quickly proves that in the hands of a skilled driver it’s just as sporty and entertaining, some controllable sideways action elicited easily by a boot-full of throttle on some sharp turns.

The day ends, at least for us, with a stop at an eatery in the area. Maserati clients will be treated, instead, to a mini banquet at Gerotek’s dining quarters so not to waste any of their time. They need to return to their captains’ chairs to steer corporate ships on steady courses.

The experience costs R3,000 per person.

The Swedish automaker is looking to fit optional cameras in its cars that can monitor the health of drivers, and ideally predict health emergencies ...
Cars, boats & planes
3 years ago