The new BMW X7 delivers a new 'dimension in luxury' 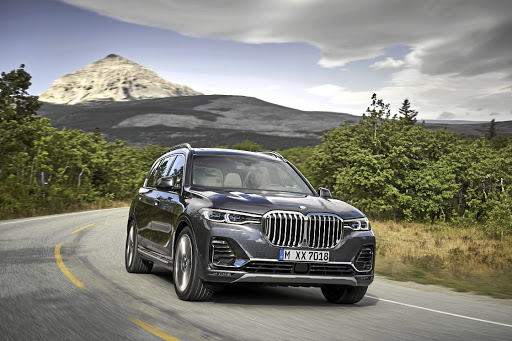 The famous kidney grille is at its most enormous now.
Image: Supplied

After months of teaser images BMW has finally unveiled the production-ready X7 SAV.

Describing it as a new dimension in luxury, at 5,151m from nose to tail, 2,000mm wide and 1,805mm tall, it’s 159mm longer and 60mm higher than the X5. It’s the Airbus A380 of BMW X models thus far. With 3,105mm of wheelbase reserved for carving out an interior, the production X7 remains true to the concept car’s tantalising glimpses of flagship living hallmarks fused in with room for seven atop a high-riding platform wrapped around BMW’s boldest expression of its current corporate look.

Built at the Spartanburg plant in the US, the vehicle sporting BMW’s largest kidney grille yet is set to be rolled out from March 2019. The seven-seat configuration is a standard feature across the range but the middle row can be optioned with two individual comfort seats, which offer similar adjustability as the front pair.

A third row of seats — an historic Achilles’ heel of seven-seat cars — is said to provide functional space for full-sized humans, and the seats come complete with high-end Vernasca leather trim. Loading capacity in the X7 is 326l with the seats up and 2,120l folded. 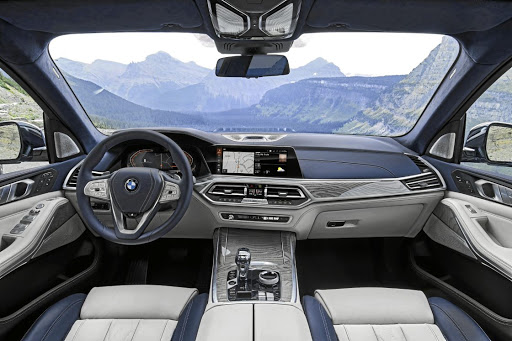 A lavish interior and a truly usable third row for adults.
Image: Supplied

The engine line-up for SA will consist of a duo of diesel derivatives: the M50d and 30d.

According to BMW SA’s product communications manager, Edward Makwana, consideration for petrol engines (50i, 40i and 30i) will be determined after launch.

Air springs combined with electronically controlled dampers at all four corners of the X7 offer an adaptive suspension. A raft of technologies create a drive texture maximised for comfort, off-road driving and hallmark BMW agility.

Integral Active Steering and Executive Drive Pro with active roll stabilisation are optional for the pursuit of supreme wafting while an M Sport differential is standard fitment on the BMW X7 M50d due to its sporting credentials, signalled by that M in front of its model designation.

In M50d form the X7 is powered by a 3.0l six-cylinder in-line diesel with a quartet of turbochargers: two for the high-pressure stage and the other pair used for tractability during low pressure engine loads. It outputs 294kW at 4,400rpm and 760Nm of torque. Headline performance numbers are claimed to be 5.4 seconds from standstill to 100km/h and a governed top speed of 250km/h. Fuel efficiency for the urban and extra-urban cycle is said to be 7.4l-7.0l/100km with CO2 emissions of 193-185g/km.

In 30d guise the 3.0l six-cylinder diesel engine gets a single variable geometry turbocharger for outputs of 195kW at 4,000rpm and 620Nm of torque. Performance is rated at 7.0 seconds for the 0-100km/h sprint and a 227km/h maximum. The 30d fuel cycle is claimed at 6.8l-6.5l/100km/h with CO2 emissions of 178-171 g/km. An eight-speed Steptronic transmission is standard fitment across all derivatives. 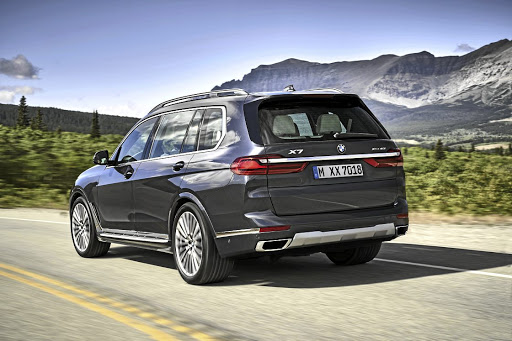 Styling of BMW’s largest SUV certainly isn’t subtle, and is sure to polarise opinion.
Image: Supplied

The largest BMW X also subscribes to the firm’s quest for prowess over wide-ranging terrain. There is the option of an Off-Road package with xSand, xGravel, xRocks and xSnow ratios to prompt various engine, transmission mapping and height adjustability.

The latest version of xDrive is said to possess greater precision in its torque splitting duties between the wheels in mitigation to selected drive modes or change in surface quality.

BMW's journey from a traditional car maker to a technology company

We speak to Pieter Nota, one of the key people managing BMW’s evolution from being a traditional car maker
Cars, boats & planes
3 years ago

Four sumptuous SUVs side by side

The automotive industry's battery electric vehicle trend does not show signs of slowing down. How will the Mercedes EQC charge up?
Cars, boats & planes
3 years ago