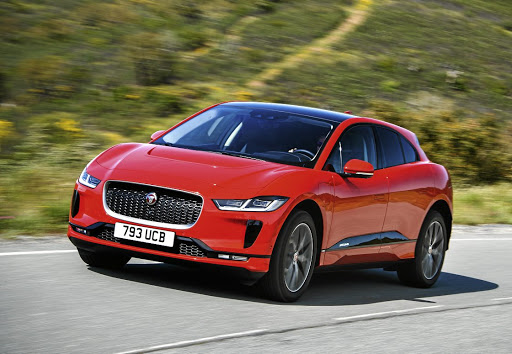 Designers had a clean sheet of paper for the I-Pace but still gave it a real Jaguar look
Image: Jaguar

The Jaguar I-Pace breaks with tradition and so are we: normally we would leave our verdict on a new car until the end but when it comes to the I-Pace you need to know one thing up front — it is not only a fantastic electric vehicle (EV), but it is a fantastic vehicle full stop.

If the world has been waiting for a car that redefines the automobile for the future then the I-Pace is it. At least for now.

We have driven plenty of EVs over the years, from the Nissan Leaf to the BMW i3 and the Tesla Roadster to the concept Infiniti Emerg-e. We have been disappointed and impressed in sometimes equal measure but what we have not been is seriously excited about the electric car future, until now.

High-performance variant of the F-Pace springs to a top speed of 283km/h, writes Lerato Matebese
Cars, boats & planes
4 years ago

The I-Pace was a "clean sheet of paper for us" says Matthew Beaven, chief exterior designer of advanced design at Jaguar.

"We wanted to make an authentic car — not design electric," says Beaven.

Removal of the engine from the front enabled the driver to be moved forward; in fact the whole car has a cab forward design about it.

We say car because it looks like it is the size of a large family hatchback, but Jaguar is adamant it is an SUV, with Beaven explaining to us at the international launch in Portugal there are certain rules that define what makes a vehicle an SUV, including ground clearance, distance between the wheels and so on. We could debate it but really the I-Pace has created a category all of its own so we would just be being picky.

The inclusion of 432 high energy density lithium-ion pouch cells beneath the floor gave the design and engineering teams more freedom, with Beaven saying that the battery pouches could be moved around "like Lego".

At either end of the battery storage sit two synchronous permanent magnet electric motors, one on each axle, which provide four-wheel drive but without the traditional need for a propshaft, again something which improved packaging.

In total the motors provide 294kW and 696Nm of torque, but these figures do not tell the whole story. Typical of an electric vehicle, that torque is available instantly. Driving on the roads of Portugal, it was essential to keep an eye on the speedo because there is no engine noise (save for a bit of noise-generation through the speakers).

Put your foot down and in spite of the weight (it weighs more than 2,133kg) the nose lifts up so dramatically that you wonder if you should have dragster wheels fitted on the back. The I-Pace launches with a sports car feel, hitting 100km/h in 4.8 seconds and going on to a top speed of 200km/h. It seems relentless in its power delivery, in part because it has no gearbox, no change in rev noise, it just keeps going and going.

And we have no doubt it will hit 200km/h because we hit 197km/h on the Portimao racetrack. Yes, we took an electric SUV to the track where it proved that it has all the Jaguar DNA you would expect in one of the brand’s sports cars.

Granted, things did get a little squirrelly under very hard braking and late turning but with that much weight it’s no surprise, but it gathers everything up, gives you complete control and you lunge through the apex to chase the next corner. 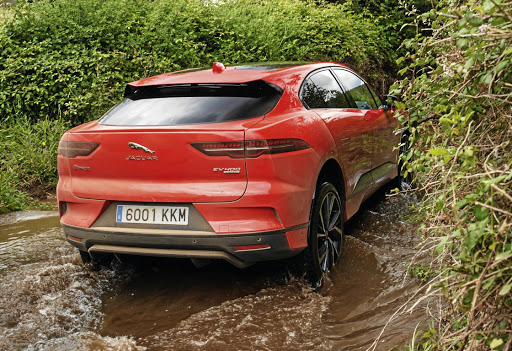 Yes, we took an electric vehicle through a river and it wasn’t a shocking experience
Image: Jaguar

We normally say this about sports sedans or performance models and no-one is ever going to take their I-Pace to the track, but Jag has done an extremely good job here.

If you think that is surprising then even more of a revelation is the I-Pace’s off-road ability. It is probably not going to match a Discovery over the real rough stuff but it handled some decent ascents and descents, rocky routes and more with ease. It even drove along a river.

Okay, it was more of a stream really, but we are talking about mixing water and electricity here and within metres we were confident of its ability and we barely tested the claimed 500mm wading depth.

The ride is a little firm at times, mainly because you can have up to 22-inch wheels, but those wheels help to define the overall design. Even with the wheels, the whole thing sits 100mm lower than an F-Pace.

Beyond the drivetrain technology, there is other clever stuff too. The grille at the front channels air through a duct in the bonnet (beneath which is a small luggage space that internally Jaguar calls a "Froot") and over the front windscreen just as on the C-X75 concept sports car, creating essential aerodynamic downforce.

The new Rolls-Royce SUV has finally been revealed in London
Cars, boats & planes
4 years ago

At the rear there is a spoiler which is aero neutral according to Beaven but this sits above a rear window made of hydrophobic glass. As the name suggests, the glass has a phobia of water, meaning it refuses to let water stick to it. This is why there is no rear window wiper.

We were not convinced initially but after doing a few kilometres on gravel roads, there wasn’t even a speck of dust on the glass. Clever.

Like all EVs though, the claim is optimistic and not just if you are charging around a racetrack, climbing up a hillside, wading through a river and seeing how long you can keep the nose up for under hard acceleration.

When we were a bit more reasonable in our demands on the car, we had 104km of range left after 161km of road driving. I reckon you could easily get 300km out of it between charges but it all depends on the driving situation, as it does with a petrol or diesel car really.

The interior is spacious thanks to the 2,990mm wheelbase and you get 656l of luggage space which can be expanded to 1,453l with the rear seats down. Those rear seats provide great legroom and reasonable headroom although taller types might find themselves feeling the heat a little through the vast panoramic glass roof. 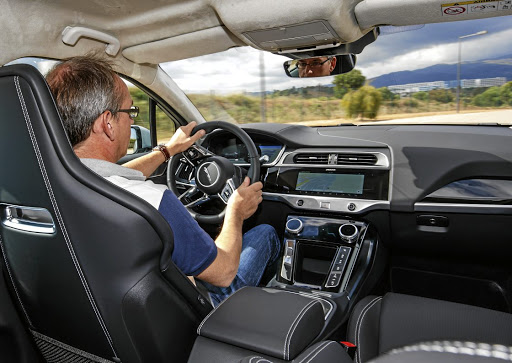 Fortunately you can pre-condition the interior through an app to ensure the car is nice and cool when you get in, or warm if you are experiencing Joburg’s current winter temperatures.

Elsewhere in the cabin there are six USB ports, three 12V sockets, over-the-air software updates (Tesla anyone?) and a 4G Wi-Fi hotspot. The car can also talk to your home if you have a smart home and if you are in a suitable country you even talk to your car through Amazon’s Alexa. Now you will have two best friends — Alexa and your I-Pace.

Are we impressed? Definitely. Is it going to be expensive? Almost definitely. In many countries the I-Pace will qualify for various government grants, none of which is available in SA at present; in fact, we are still being hit by additional import duties for EVs from Europe.

Hopefully by the time it arrives in SA in 2019 government will be more friendly towards EV ownership.

We started with a verdict, so that leaves me with little more to say except that if Jaguar set out to create a game changer, then it’s very much job done.

Good luck to Audi and Mercedes with their efforts — the Jag is going to be hard to beat.

The XC60 which was voted the 2018 World Car of the Year is Volvo's most successful model to date
Cars, boats & planes
4 years ago

Lamborghini’s Urus could have gone so wrong but instead, it has turned out brilliantly, writes Michael Taylor
Cars, boats & planes
4 years ago

The E-Hybrid will be the cleanest Porsche Cayenne you can buy, if you remember to plug it in regularly
Cars, boats & planes
4 years ago