Mark Smyth was one of the first in the world to experience the Rolls-Royce of luxury, the eighth generation Phantom

Words: Mark Smyth
The eighth generation Phantom has more of a dynamic presence in its design
Image: Supplied

There’s a German car company that uses the slogan “the best or nothing.” Some marketing person is very proud of that and so they should be, it’s a good slogan. Except that it presumes there is nothing better than them. And there is.

“That car out there is the best that humankind can do right now in terms of luxury.” You would expect Richard Carter, director of global communications at Rolls-Royce to say that at the launch of the eighth generation Phantom in Switzerland, but being one of the first to drive it, I would struggle to argue with him.

When Carter says that the new Phantom is “the world’s ultimate luxury product,” the world’s luxury houses are all likely to agree, after all, many of them refer to their products as “the Rolls-Royce of”.

Rolls-Royce has revealed the latest generation of its “best car in the world,” the Phantom, writes Mark Smyth
Cars, boats & planes
3 years ago

The Phantom has been around for 92 years, making it the oldest nameplate in the automotive industry. In that time each one has been revered as an icon of craftsmanship and luxury. The latest generation is all-new from the ground up, including at ground level, noise insulating tyres. These are important because CEO, Torsten Muller-Otvos, laid down a clear brief to his team to “make sure it is the most silent vehicle in the world,” says Philip Koehn, the company’s head of engineering.

Koehn says the Phantom features the “architecture of luxury” which includes a brand new platform that will underpin all future new models including the new Cullinan SUV. It features extensive use of aluminium, including the roof and C-pillar which in this age of robot welding, still have to be welded together by hand because a robot gets very grumpy at trying to deal with the imperfections in the edges of the metal.

But this is a Rolls, all about handcrafted luxury and there is lots of it. I can go on about the beautiful, smooth, 6.75l twin-turbo V12 engine with one of the most progressive power bands on the planet (I find myself using words like planet when talking about the Phantom) but it is the interior that counts.

We drove the extended wheelbase version which measures in at 5.98m (the standard version is 5.76m) which means legroom for miles and thick pile carpets to lose your shoes in. The seats feature the best leather of course and you don’t sit on them, you sink into them, your head nestled in the headrest as though it is a pillow at the Saxon or the Savoy. You lounge in the back, surrounded by champagne flutes, technology such as the infotainment screen hidden discreetly behind a wood panel on the back of the seat and a footrest which rises up at the touch of a button. You can push a button to close the doors now too and the rotary dial to control the infotainment turns with an incredibly satisfying feeling of solidity.

Taylor says the Phantom is underpinned by a classical essence, most clearly seen in the interior
Image: Supplied

Specify the starlight roof and at the push of a button, hundreds of LED lights in the ceiling twinkle away and with the noise of the outside world almost completely isolated courtesy of over 130kg of sound-deadening material, you quickly feel as though you are in your own, bespoke, luxurious and of course, expensive world.

That bespoke feeling is even clearer when you look to the front of the cabin where the dash features ‘The Gallery’. Design director, Giles Taylor says it is the largest piece of glass in front of the driver anywhere in the world. The infotainment screen (Rolls has adapted it from the BMW system before you ask) sits behind the glass but at the touch of a button it can disappear. And when it does, you are left with a piece of art that spans most of the dash. There are selectable options ranging from paint to silk and even a crafted piece of metal to look like a cityscape. You can even commission your own. It is a very unique option and one which shows why the Phantom is in another world entirely. 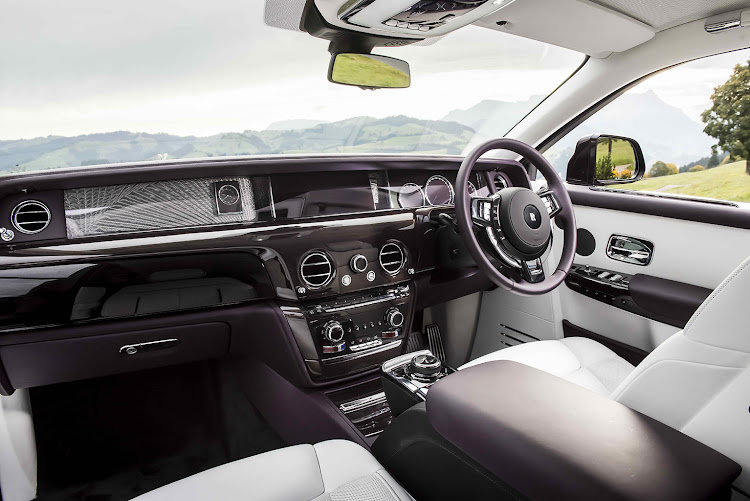 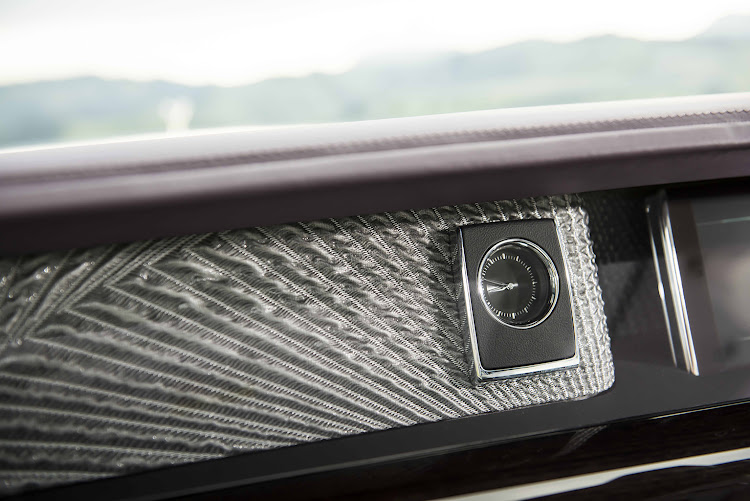 It is also a vehicle with immense presence. The facade is more dynamic in its appearance than before and fronts a vehicle that can best be described as imposing. Taylor refers to it as a “Sense of engineering permanence.” But it is not imposing to drive, even when you are chauffeuring Taylor in the back seat. He was quick to point out that the steering wheel is thicker, mainly because it houses heating technology and sensors, but this small change made driving it feel more natural.

That natural drive is surprising in a way because weighing in at over 2.5 tonnes, the Phantom should feel heavy and unwieldy, but it doesn’t. The air suspension has been improved to offer an even more comfortable ride and there is 50% more torque in what Koehn calls the “customer relevant torque range.” Really you should never need to exceed 2,500r/min, a Phantom does not need to be hurried, but I assure you that you need to be careful because it will hustle along much faster than you realise, such is the quiet way in which it gathers speed. Stopping is an art form with our driver at one point explaining the intricacies of the “chauffeur stop.” Tap the brakes lightly to prepare the suspension, then release and apply them again. The Spirit of Ecstasy will remain level, the massive nose of the Phantom will not dip and the passengers will not spill their champagne.

The Phantom is not about pace, even though it has plenty of it. It is not even about an ostentatious display of wealth, even though it carries a starting price that will make some people spit out their tea. It is about being the best of the best, the Rolls-Royce of the luxury world. In the world of “the best or nothing” the Phantom is the best. The rest can fight among themselves, because in the Phantom you just won’t hear them.

A drive on the dark side with Rolls Royce

Mark Smyth had a brief encounter with the crème de la crème world of the Rolls-Royce Dawn
Cars, boats & planes
3 years ago

Bentley has unveiled its new Continental GT with more luxury and more technology
Cars, boats & planes
3 years ago
Next Article
© Wanted 2021 - If you would like to reproduce this article please email us.