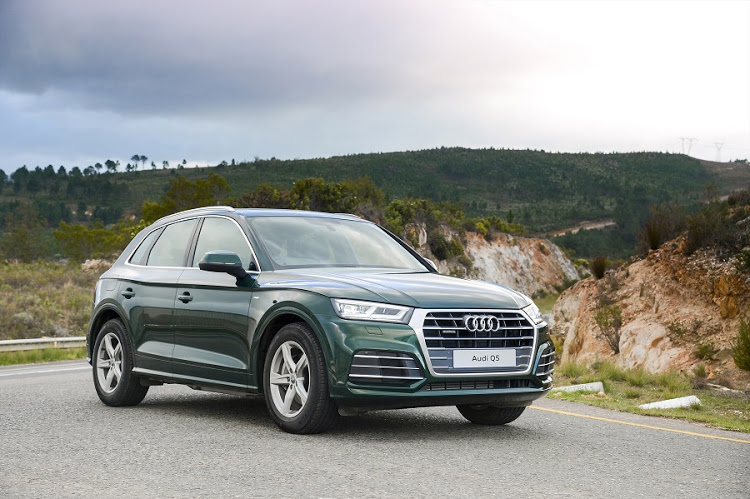 The Audi Q5 is one of the most popular SUVs in the B-segment and the marque from Ingostadt has given it some significant cosmetic surgery to try to give it the edge over rivals such as the BMW X3, Land Rover Evoque, Mercedes Benz GLC and Porsche Macan.

Audi hopes to replicate the success of the previous generation which sold more than 11,000 units in SA since its launch in 2009.

The new Q5 is longer, measuring 4.66m long, wider at 1.89m and 1.66m tall which makes for a much more comfortable and roomier interior. The rear seats can comfortably sit two adults and a teenager in the middle in absolute comfort. The boot space is 10l bigger than its predecessor’s and if you fold the rear seats down you can increase the boot space to a cavernous 1,550l. The interior is luxurious and Audi again delivers as expected with leather trim on most visible surfaces.

Video did not kill the radio star, but something is definitely killing off the medium sedan
Cars, boats & planes
4 years ago

When it comes to exterior design Audi has opted for a sportier and yet refined look. The appearance helps it to look trimmer than its predecessor, in spite of it being bigger. SUVs are not synonymous with aerodynamic efficiency, but the new Q5’s aerodynamics are claimed by Audi to be class leading with a cd figure of 0.30.

I was especially impressed by the acoustics of the car; it is quiet inside with not much noise entering the cabin. Even tyre noise was minimal. The car has an acoustics windscreen that cuts down noise levels and comes as an option for all windows as well.

Tech includes lights that are either LED or high-resolution Matrix LED lights with dynamic indicators. There is the option of the Virtual Cockpit, which is quite futuristic and forward thinking as it allows the driver to reconfigure the speedometer, tachometer and navigation cluster to suit their driving needs. The driver has a choice between a classic view with large instrument configuration with the tachometer and speedometer dominant, or the digital mode where the navigation map and infotainment dominate.

A high-resolution screen and optional head-up display also allow the driver to focus on the road with a projection of relevant information, in colour on the windscreen. This helps one focus ahead without constantly glancing at the GPS in the middle cluster. It came in handy on the twisty roads in the Overberg region in the Western Cape. 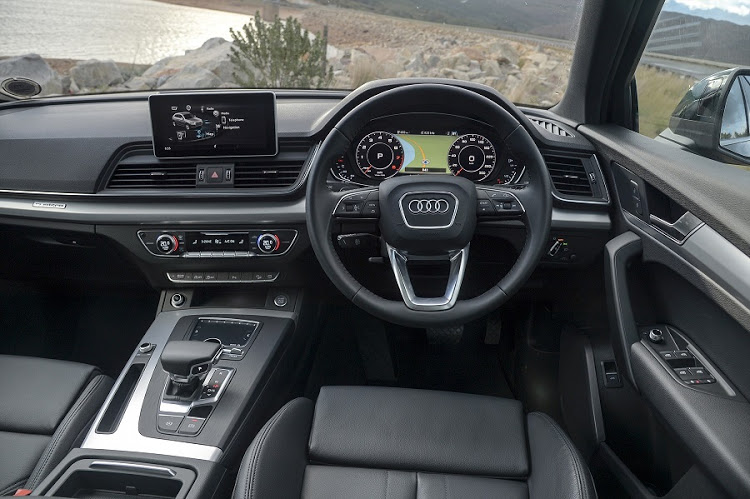 The interior is clean and luxurious but you will want to select a few items from the options list
Image: Quickpic

Audi’s new all-wheel drive system, named quattro on demand, permanently monitors the road surface, the driver and how the car is driven and adjusts accordingly. It can switch between four-wheel or front-wheel drive in milliseconds. This is impressive as I could take curvy roads at relatively high but legal speeds and could hardly feel the car lose its composure. There was also barely noticeable body roll. The technology is not intrusive but you can feel its presence in situations where you know that normal cars will start acting twitchy or feeling heavy.

The location of the small gear lever allows one to rest the wrist while using the improved trackpad of the MMI (multimedia interface). Handwriting recognition by the trackpad makes searching for names or addresses more intuitive and that helps a lot. Also, the trackpad recognises gestures like zooming, like in smartphones, that brought some welcome familiarity.

The Q5 is laden with gadgetry, although many are options, such as the wireless cellphone charging, excellent Bang and Olufsen sound system that produces 3D sound from strategically placed speakers and the smartphone interface, which activates either Apple CarPlay or Android Auto.

We first drove the diesel 2.0l TDI quattro S-tronic (starting at R698,000), which produces 140kW and 400Nm of torque. The acceleration is good and the car covers the distance in relative ease and when we had to overtake some slow-moving vehicles it did it effortlessly. 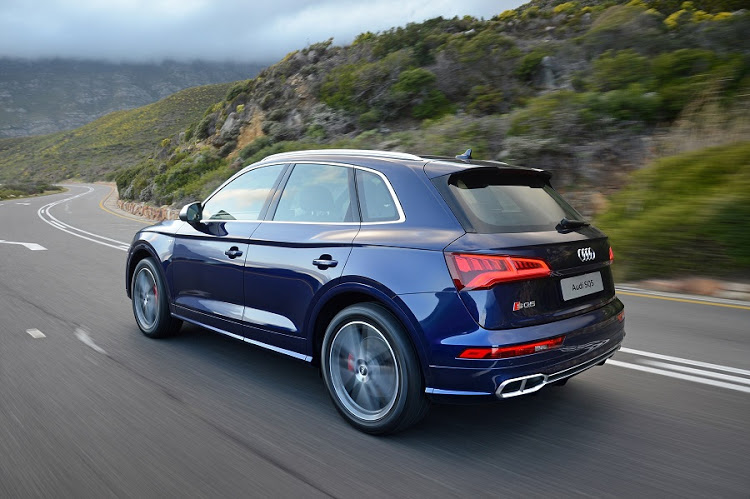 The SQ5 looks the part of a high-performance SUV with a muscular and sporty appearance
Image: Quickpic

The following day we got to experience the turbocharged SQ5 with a 3.0l V6. This one is for the performance fans. I greatly enjoyed the grunt from this 260kW power unit with 500Nm of torque. The acceleration is intoxicating and one could feel being compressed to the sports seats. The noise coming out of those quad pipes (they are fake exhaust tip covers) is impressive and more than makes up for the lack of real pipes, but then again that is often engineered sound and not the actual grunt of the exhaust.

There are a couple of issues with the new model. First, the steering is too light, even in Dynamic mode, and second, there is that obvious turbo lag which I find disappointing.

The new Q5 looks certain to maintain its position in the market, but just, as the competition is nipping at its heels at a rapid pace. The Audi SQ5 in particular is a very good package in its segment as it ticks a lot of boxes. The competition is quite stiff but I believe Audi should be able to maintain its competitive edge, but it will be very, very close.