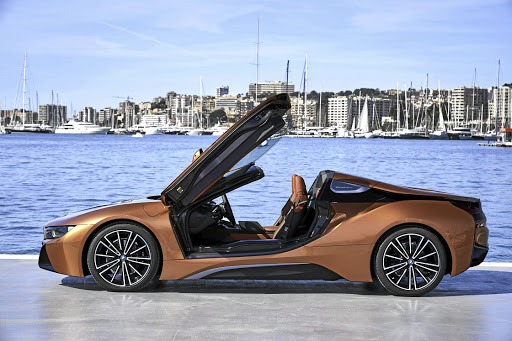 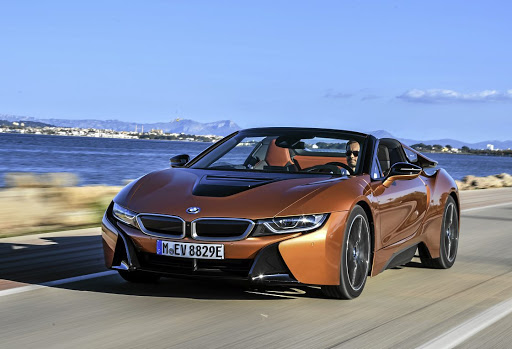 Three years after its South African launch, the BMW i8 has not lost any of its lustre as it still commands a great deal of attention wherever it goes and the Roadster variant on test this week just exponentially pushes those attributes to dizzying heights.

Of course, there is more to the i8 Roadster than its irreproachable design as it remains the only plug-in hybrid sportscar in its segment; that is, until the new Porsche 911 hybrid arrives at some point. For now though, the model can rightly claim to being one of the pioneers in its segment and it is with this in mind that you need to approach the vehicle. 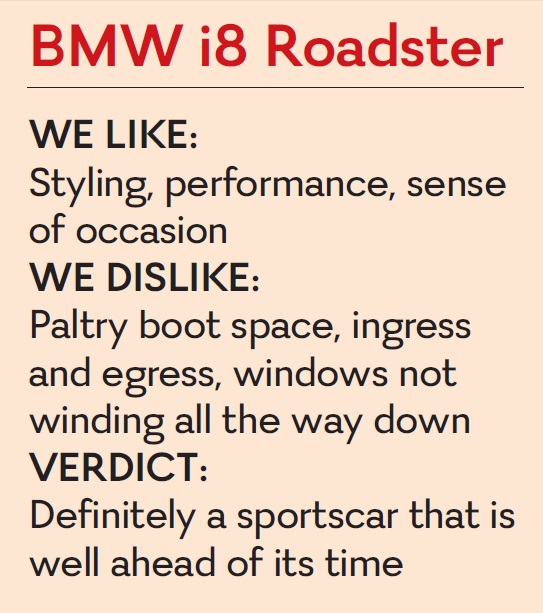 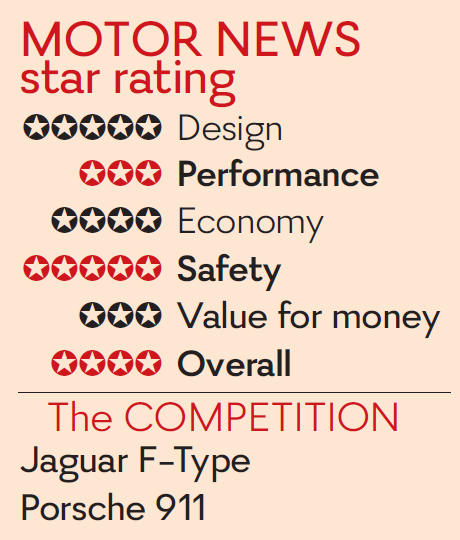 Yes, it is powered by a tiny (by sportscar standards) 1.5l, three-cylinder, turbo petrol engine located midship behind the cabin that thumps out a punchy 170kW and 320Nm, but it is augmented on the front axle by an electric motor with 105kW and 250Nm, which together essentially give the vehicle four-wheel drive traction. The combined system power is 275kW and 570Nm, enough to give the vehicle a 0-100km/h time of 4.6 seconds.

That fabric roof, which takes a mere 15 seconds to dance up and down at speeds of up to 50km/h, has only added a 60kg weight penalty over its coupe sibling, which by roadster standards is actually quite negligible.

In our launch report of the model, we mentioned how we didn’t have sufficient seat time to properly assess the structural rigidity of the model over its coupe sibling, but I am now happy to report that there is little in the way of dreaded scuttle shake and the like.

Now about that performance — the hybrid system here is geared more towards boosting performance than driving incognito in electric mode.

This is a sportscar and thus it needs to deliver on the performance quota, so I basically drove the car in Sport mode as my default setting.

The interior has BMW hallmarks but in a unique way.
Image: BMW

While there is no big engine capacity wailing behind your head, you get a three-cylinder thrum that has been amplified ever so slightly in this model. The instantaneous torque, thanks to the electric motor, when you stomp the throttle means you leave some seriously powerful cars in your wake from a standstill and the model will keep accelerating right up to its top speed of 250km/h.

For me, however, it is in the delicate yet efficient way that the model goes about its thing.

Handling is fairly sharp and while the steering does feel rather vague at times, you can easily place the vehicle wherever you want to and it follows your preferred trajectory. Thanks to its lightweight carbon fibre construction, it also corners in a flat manner that simply defies the laws of physics.

When we first drove the i8 coupe in 2015 as a pre-launch drive, I was simply taken aback at just what the BMW engineers had achieved. It took everything I had come to learn and appreciate about sportscars and rewrote the rule book. The vehicle has been well thought out and optimised to the nth degree.

Forget the traditional sportscar template. Approach the i8 Roadster with an open mind and it will leave you in awe of what has been achieved here. There’s simply nothing like it currently on the market, making it rather well ahead of its time.

Yes, you will curse the paltry 88l boot space and getting in and out of it might require some contorting to be done gracefully.

Also, the lack of a big capacity engine making its presence felt at times and those door windows that don’t wind all the way down into the doors are just a few of my bugbears.

The rear features intricate pieces of design that are both gorgeous and functional.
Image: BMW

However, all things considered, the i8 Roadster represents a paradigm shift for sportscars. It is efficient and satisfyingly rapid.

While I might prefer shelling out my hard-earned money on a Porsche 911, a piece of future automotive technology such as the i8 simply has no peers.

Entering the future with the BMW i8

The BMW i8 makes a statement — even in an era where cars of the future are rapidly becoming cars of today
Cars, Bikes & Boats
1 year ago

After driving the latest Porsche 911 GT3, Lerato Matebese says it should rate as one of the world’s seven wonders
Cars, Bikes & Boats
2 years ago