BMW has launched its latest supercar — an executive sedan

The BMW M5 is fit for a school run, a trip to the office and a spin around the racetrack

Words: Mark Smyth
The new M5 has been designed for the executive but engineered for the racing driver
Image: BMW

Ask most people what a track car is and they will probably come up with the name of any number of sports cars or hot hatches.

But the BMW M5? Surely not? The M5 is an executive performance sedan designed more for the daily commute.

I have no idea whether it is still good at that but I can tell you it’s brilliant on the Kyalami racetrack where BMW SA launched it. And you can drift it (not to be attempted on the streets of Sandton obviously) courtesy of a two-wheel drive drift mode.

BMW aims to reclaim its no.1 position with their latest offering

The release of the BMW X2 this month brings a new dimension to the Bavarian car maker’s range
Cars, Bikes & Boats
2 years ago

We might be slightly confused by BMW’s approach to the launch of its latest executive weapon but we aren’t confused by its credentials that elevate the R1,762,806 M5 beyond the executive realm and into the domain of the supercar. 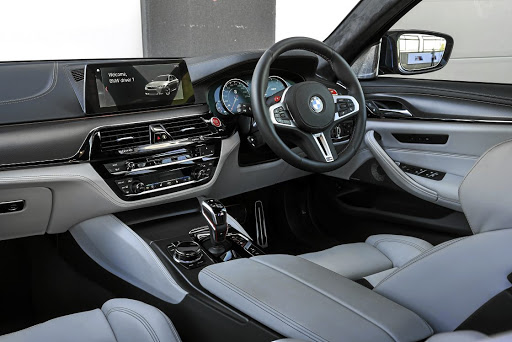 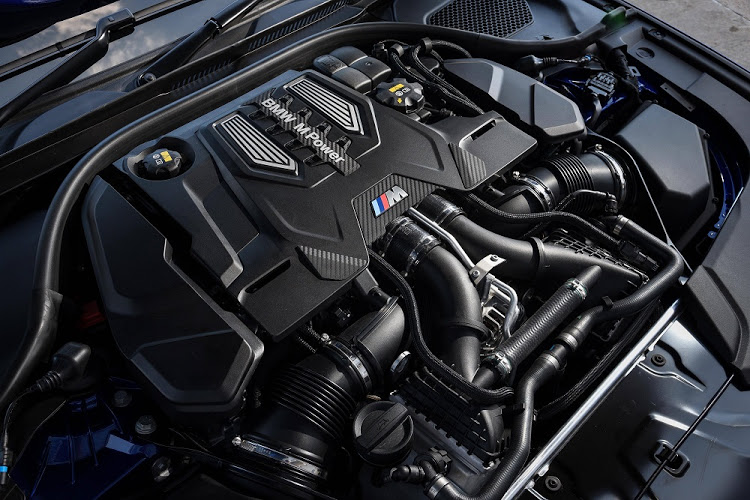 But this is a four-door luxury sedan weighing 1,855kg (less than the previous generation thanks to lightweight components such as the carbon fibre reinforced plastic roof) that can be used to go to the office or to do the school run.

It is the stats that probably make using Kyalami a little more sensible, especially when you need to rely on the optional carbon ceramic brakes (23kg lighter than standard) to scrub off speed at the end of the main straight from 230km/h. Turn into the first corner and some of the engineering that makes its first appearance on the M5 becomes clear. We are talking about BMW’s all-wheel drive xDrive, now specifically engineered for the M5 and given the term M xDrive.

Impressively there is almost no understeer, only grip, lots and lots of grip, helped by optional 275/35 R20 tyres up front and 285/35 R20 tyres at the rear. And a very long list of driver assistance systems that are available to varying degrees depending on which mode you are in, from comfort through to the M1 and M2 modes. You can kick almost all of them into touch, allowing for maximum attack with the M xDrive system shuffling power between the front and rear axles and making the best use of the Active M Differential which can provide a locking effect up to 100%.

Technically it is the sixth generation of the M5, but the 530 MLE (right) built only in SA in 1976 is easily its forerunner
Image: BMW

Then there is the two-wheel drive mode. Go there and it will probably result in smoking tyres and you facing the wrong way. On the day it was left to BMW GTC racing driver Gennaro Bonafede to demonstrate pure rear-wheel drive adrenalin.

Back to our drive and the M5 handled every twist and turn of the new Kyalami track with ease. The electronic steering, so often a point of criticism, was extremely accurate and the power delivery through the eight-speed gearbox was excellent, particularly in manual mode using the paddles. There were moments of delay in response in auto mode but put everything in massive attack and the M5 just gets on with it. The ’box is not as brutal as in the last generation, but that means a more comfortable commute so it’s a compromise worth having.

As good as the M5 was on the track, I have to say it might be a little too good. It was confident and confidence-inspiring, almost to the point of cruising around the track. It scrubbed off speed effortlessly, got the power down superbly and not once felt as though it was relinquishing control to the laws of physics, in spite of its size and weight.

The new M5 is easy to drive and drive fast. In fact when you think of a track car, perhaps it really is the perfect example. While we can only assume it is going to be everything a 5 Series should be on the road in terms of comfort, its ability to be that comfortable and controllable on track while delivering such blistering performance puts it firmly into the everyday supercar category and that used to be occupied only by, well, supercars.

Hard, fast & loud: the Ferrari V8 in a league of its own

Mercedes-AMG’s GTC is a medley of rock’n’roll and rhythm and blues
Cars, Bikes & Boats
2 years ago

McLaren is shaking up the establishment of the supercar players
Cars, Bikes & Boats
2 years ago

This article was originally published  by the Business Day.

Just super: Five supercars to turn you on and rev you ...

Bugatti Baby II: The iconic Type 35 comes of age with ...

Maserati breaks boundaries with its first-ever ...