Words: Mark Smyth
The Velar has all the looks of a stunning concept car that actually made it into production
Image: NEWSPRESS UK

If you are a scholar of Latin then you will know that the verb velare means to hide or conceal. It’s quite an appropriate word given some of the shenanigans in SA at the moment, but many will not realise just how significant a word it is in the context of the automotive industry, particularly when it comes to SUVs.

Way back in the late 1960s, Land Rover decided it wanted to make something a bit special, a more luxurious SUV. It created a prototype and began testing it. That vehicle was called the Velar, a play on the Latin verb. That vehicle became none other than the Range Rover.

Since then cars have got more complicated, but now Land Rover has resurrected the name for the fourth Range Rover model and with it comes a reductionist design strategy.

Motor News was one of the first publications to drive the imminent Range Rover Velar on local soil
Cars, Bikes & Boats
2 years ago

What is not reductionist is the level of attitude. For me, the Velar could be the best-looking Range Rover. The front looks like a concept that made it into production with its wide grille that is best-looking in the matte chrome rather than the optional Black Pack.

That massive bumper contrasts with the narrow headlights and it all combines not just to give the Velar serious presence but to also show the design direction the company is taking.

The Velar sits on the same platform as the Jaguar F-Pace but with its low roofline and 2,874mm wheelbase it looks long and sleek. That long rear overhang makes space for a boot that holds 673l and you can fold the seats down to increase it. Speaking of seating, the Velar is a five-seater, which is not surprising given that tapered roofline. If you need seven then it’s the Discovery for you, but if you are wondering about the fight between Disco and Velar then read on, we’ll get to that.

The Velar is a Land Rover at heart and so it gets all-wheel drive with what the company calls Intelligent Driveline Dynamics and an active locking rear differential. We did not do any serious off-roading at the launch in the Western Cape, but it’s a Range Rover so we have a predictable level of expectation when it comes to its ability.

We were in the Cape on a day that it chucked it down with rain, which was very welcome for the drought-stricken province. Traversing gravel roads, the Velar handled superbly. It was extremely composed and the ride was exemplary. 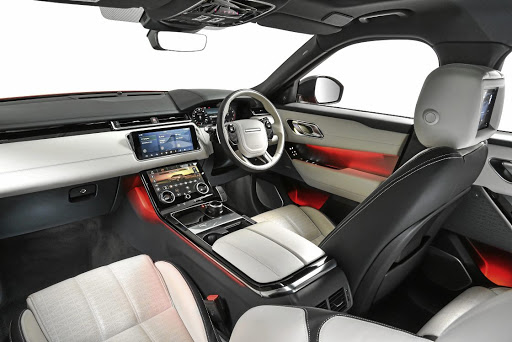 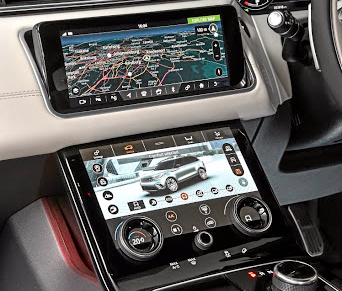 There are six engine options including the entry-level 2.0l Ingenium diesel and the range-topping 280kW supercharged V6 petrol. We drove both as well as the 3.0l V6 diesel.

Not surprisingly the supercharged version was a bahnstormer, delivering superb power and torque almost instantly and with a soundtrack to match, albeit one that its slightly more muted than its Sport siblings.

The 3.0l diesel was strong with good response, but it was the 2.0l that surprised. It pulls adequately without any risk of leaving rubber on the road but it is the mid-range torque that was most impressive. It is more than up to most tasks and by most we mean driving around your neighbourhood, not traversing mountains or driving from Cape Town to Gabarone.

The supercharged model will be the status version, at least until a SVR version comes along, while the 3.0l diesel will suit those who travel further and need the engine to work slightly less, but the 2.0l should fit the bill for most.

So the Velar ticks plenty of boxes, but while we love its exterior styling, including electronically extending door handles, it is the interior that sets it apart. There is a distinct Range Rover feel about it in terms of design and materials, but it marks the debut of the new digital instrument cluster, as well as the Touch Pro Duo infotainment system.

This system features two 10-inch touchscreen (the same system will feature in the new Range Rover and Sport models in 2018) and brings the tech that the concept of new Discovery promised. It is an impressive system that not only looks good but simplifies access to many of the controls and systems.

It is not perfect though, particularly because it is so low down in the cabin that you have little choice but to take your eyes from the road.

With no physical feedback to any of the buttons, it is easy to hit the wrong icon. No doubt with time owners will become used to the system, reducing their need to look down at it.

The alternative is to use the menus in the instrument cluster, which are now accessible via new buttons on the steering wheel which you can push or swipe. Annoyingly these are also slightly flawed because the system can take so long to respond to your input that you find yourself selecting something else. Again, owners will get used to having to wait.

Elsewhere, the interior is crammed with cup holders, storage, USB and 12V power outlets and it is even capable of 4G connections with wi-fi hotspotting. You can have an activity key on your wrist which allows you to lock and unlock the car without the need to carry a key fob while mountain-biking or swimming.

You can also have seats made from a new textile made from sustainable materials.

In fact there is so much in the new Velar that we don’t have enough space to tell you everything, so let’s get back to that Discovery issue.

Actually it is not a long discussion. The Disco has the option of seven seats. If you don’t need seven seats, buy the Velar. It’s a Range Rover.

We love the Disco, or rather we did (for the record I haven’t driven the new one yet, so I might eat my words).

The problem is that the Velar gets all the tech that the Discovery concept promised but did not deliver and the Velar wears a Range Rover badge in a country where the badge carries more weight than the capabilities of the product. Also, the Velar is better looking. It starts at R950,208, eight grand less than the Disco, although the specs are obviously different.

The choice between the two will come down to personal preference, but we have no doubt that city streets and private school car parks will become Velar territory and will be all the better looking for it.

The rear looks a little too elongated, but that gives it decent boot space
Image: NEWSPRESS UK

Land Rover plugging into an exciting and sporty future