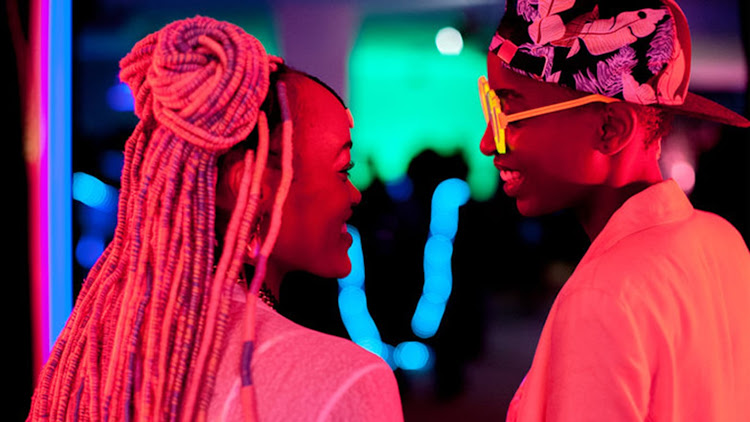 A scene from 'Rafiki'.
Image: rafikimovie.com

It’s Pride Month and there are plenty of curated selections of LGBTQ+ films and series available on various platforms. They recognise the pioneering and moving contributions that have been made to the cinematic universe over the decades, by filmmakers who examine the many layers and complexities of the lives, hopes, dreams and loves of the LGBTQ+ community.

Here are three from the continent that offer very different but powerful and thoughtful considerations of the challenges and aspirations of queer people and desire, past and present, in a place that is still so often depressingly hostile to their existence.

SA director Oliver Hermanus’a fourth feature film from 2019 offers perhaps his most accomplished and satisfyingly realised exploration of his preoccupations with the country’s often toxic brand of white masculinity.

Based on an autobiographical novel by André Carl van der Merwe it’s the story of a shy, apartheid-era teenager named Nicholas van der Swart (Kai Luke Brümmer) who like all white males of his age at the time finds himself conscripted into service in the army.

A soft-spoken English speaker with an Afrikaans surname, Nicholas is aware that he's an easy target for victimisation and bullying by his hyper-masculine Afrikaans flag-waving fellow recruits and so he tries as best as he can to keep his head down and stay out of trouble.

His reticence may offer him some respite but it’s the source of intrigue and an increasingly complicated and homoerotic relationship with another recruit, Dylan Stassen (Ryan de Villiers), which will lead them down a potentially terrifying path if they’re discovered and sent to the army’s notorious Ward 22 where gay men are sent to have the demon of homosexuality tortured out of them.

Slow, burning with longing and also righteous anger at the way in which apartheid’s rampant homophobia oppressed its homosexual community and quietly devastating in its indictment of the regime’s shaping of an aggressive and destructive hyper-masculinity, it’s one of the most thoughtful and moving works in post-apartheid SA cinema.

There are echoes of Claire Denis’s Beau Travail and a training-to-battlefield structure that recalls Stanley Kubrick’s Full Metal Jacket.  Ultimately though, Moffie is carefully controlled by Hermanus, skilfully acted, evocatively shot by cinematographer Jamie Ramsay and atmospherically scored by Braam du Toit to become its own uniquely moving portrayal of a time, place and way of life that though they may have disappeared on the surface continue to make their deeper psychological and philosophical scars still too dishearteningly felt in present day attitudes and actions.

WATCH THE TRAILER FOR THE FILM BELOW:

The friendship is unlikely because the girls’ fathers are running against each other in an upcoming local election and things aren’t made easier when it becomes clear to both of them and the neighbourhood gossip that they’re catching feelings for each other, something that in the conservative, distinctly homophobic environment of Nairobi carries potentially terrifying consequences for them and their families.

There’s plenty of warmth, colour and humour on display but there’s also an awareness of the terribly unjust treatment of the LGBTQ+ community in Kenya

It doesn’t reinvent the wheel as far as its plot or depiction of its central relationship is concerned but in its vibrant tribute to the innocence of its protagonists and their very real feelings and its energetic portrayal of its setting, the film offers a gently heartwarming and quietly defiant celebration of its all too universal themes.

There’s plenty of warmth, colour and humour on display but there’s also an awareness of the terribly unjust treatment of the LGBTQ+ community in Kenya that gives it an urgency and relevance that can’t be ignored.

Ultimately the Kenyan government were taken to court and forced to overturn the ban and now thanks to the support of the international film community and streaming platforms, it’s widely available to offer its touching picture of ordinary love under unnecessarily extraordinary conditions with directorial verve, vigour and memorable performances from its talented young cast.

WATCH THE TRAILER FOR THE FILM BELOW:

Diamond in the rough: Heaven Reaches Down to Earth — Mubi.com

Filmed on location in the majestic Limietberg Nature Reserve in the Western Cape, it’s a brief but powerful series of visual snippets detailing a hiking trip made by two young men.

This June Wanted explores the complex world of masculinity through conversations, personal essays and interviews. In our first profile, George ...
Voices
1 month ago

The narration speaks of a dream about fires and those called to put them out and there are more than enough flames in the uncertain but erotically charged relationship between the characters to keep watching and wondering what exactly may have or may have not happened between them.

What’s certain is that the imagery and the intensity of feeling that the film conveys linger long after its brief but haunting running time.

Somewhere in these mountains, far from the pressures of a hostile society and with only the eternal face of the rocks to witness, these young men were briefly but unashamedly free to just be themselves.

These three films explore the intertwining lives of characters in different places around the world
Art & Design
6 months ago
Next Article
Commenting is subject to our house rules.
© Wanted 2022 - If you would like to reproduce this article please email us.