This posthumous exhibition pays homage to the artist, who would have been 102 in June Self Portrait as an Artist 2007.
Image: Supplied

Goodman Gallery in Johannesburg has just opened a fascinating posthumous exhibition of works by one of the country’s doyens of painting, Robert Hodgins. Titled Robert Hodgins: +/- 102, the show is partly a homage to the artist, who would have been 102 in June, and partly an investigation of the legacies and influences of his work 12 years after his death in 2010.

Hodgins occupies something of a unique position in the country’s art history. He had a long and storied career locally, and his influence as a teacher in his position as painting lecturer at Wits from 1966 to 1983 is undeniable. But his own career as a full-time artist only commenced when he left Wits in 1983. In many ways his style thus hovers between a kind of figurative expressionism drawn from academic study and a unique and much more contemporary approach to figuration, palette and brushwork.

The title of the current show is also a nod to the influential exhibition Ubu +/- 101, staged at Wits in 1997 and which was the last of a number of important collaborative works between Hodgins, William Kentridge and Deborah Bell. Ubu, a central character in these collaborations, was originally the buffoonish bureaucrat in Alfred Jarry’s dadaist play. This figure of incompetence but malignant intent was adopted by Hodgins, and given many different and characteristic forms: the businessmen, military leaders and society women who populate his life’s work in an indefatigably satirical way, and who feature prominently in this show.

But there is also much that is unique and compelling in this retrospective. Many of the works are from the artist’s estate and are showing for the first time. There are early drawings, little more than doodles, that provide insight into the artist’s mature direction, and there are later oil monotypes, deftly showcasing his satirical character studies.

However, it is some of the late oil paintings on show, completed close to the artist’s death in 2010, that most hold the attention. 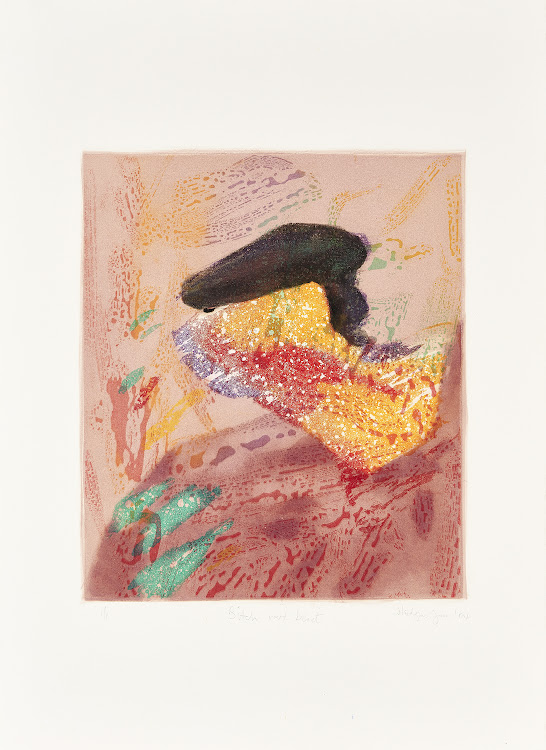 4 Simple Paintings Instigated by Philip Guston are organised in two sets of diptychs, depicting a sinister set of figures and the paraphernalia of a gallows. Deliberately pared down from his usual explosive colour palette, these works also feature a trademark stocky, threatening military figure and some seated figures, perhaps awaiting the hanging that is to come. 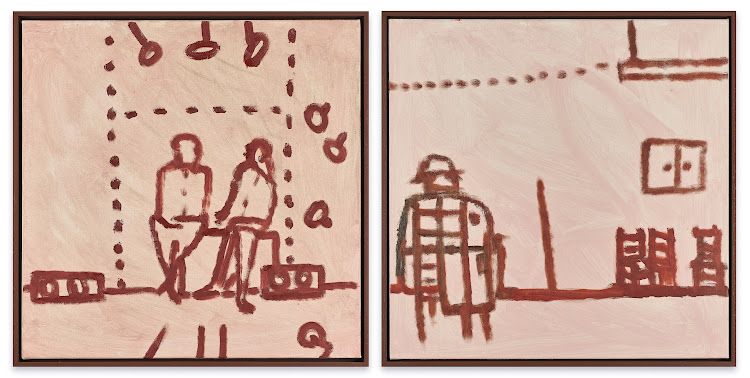 The homage to Guston is significant. The Canadian-American artist moved away from mainstream abstract expressionism in the mid-20th century to depicting vicious, often cartoonish satires of social evils, especially the Ku-Kluk Klan. The parallels with Hodgins’s own career are obvious, and indeed his drawing of Klansmen, a sketch for his work Clubmen of America: the Klan, is included here.

Finally, the large work titled Warehouse headlines the exhibition. Though unsigned, it is a thoroughly representative Hodgins work in its composition and use of colour, and was in all likelihood one of the last works he completed. The ambiguous figure seated at the left is enveloped in a perfectly realised sense of industrial gloom, beautifully counterpointed by the open doorway letting in a shaft of acidly bright arc light at the right, the figure in the doorway disappearing towards the lightsource. It is a composition that one can read as an elegiac allegory for a painter’s life well-lived.

Gods, pets and swamps are explored in multisensory group and solo exhibitions across SA
Art & Design
1 month ago

Have art, will travel

SA artist Reggie Khumalo, whose work celebrates ubuntu, recently had his first solo exhibition in West Africa. Next on the list is New York
Art & Design
2 months ago

Common humanity in every face at Metelerkamp art show

A stunning new thematic exhibition, The Mirror In You and Me by John-Michael Metelerkamp, prompts self-reflection
Art & Design
2 months ago
Next Article
© Wanted 2022 - If you would like to reproduce this article please email us.