As Jeymes Samuel’s The Harder They Fall continues to gain critical and popular acclaim, check out these three films that are also devoid of white intervention or influence 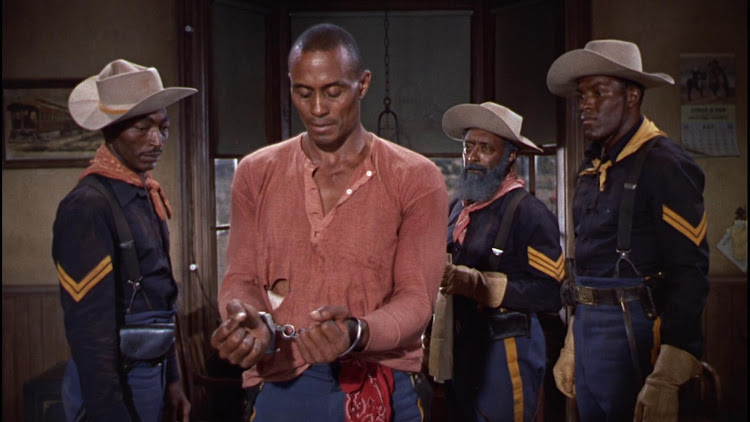 Jeymes Samuel’s The Harder They Fall continues to gain critical and popular acclaim since its debut on Netflix earlier this month, not least because of its seeking to make the Western genre confront its lily-white past.

Many see the film — with its all-black, star-studded cast that includes Idris Elba, Regina King and Jonathan Majors — and its tale of revenge involving two all-black gangs, living in all-black towns and devoid of white intervention or influence, as a major moment in the history of a genre that was once as popular as the superhero blockbusters are today.

Whether Samuel’s film will, as some predict, mark a Black Panther moment and lead to a flood of similarly revisionist films that seek to address the genre’s glaring representational imbalance, remains to be seen. In the meantime, here are three Westerns featuring strong, black leads and black-focused stories.

Mario Van Peebles, actor, director and son of legendary black pioneer filmmaker Melvin Van Peebles — who died earlier this year — goes all out with this 1993 epic. While the initial response was lukewarm it has since garnered critical acclaim and a cult following.

It’s the story of a band of buffalo soldiers — black troops who mainly served on the western frontier after the American Civil War and immortalised by the eponymous Bob Marley song. Van Peebles plays Jessie Lee, a refugee from the Spanish-American War who leads a group of deserters to a town where he has a score to settle. The grim travellers are pursued by a sadistic US army colonel played with gleeful over-the-top style by Billy Zane.

It’s an angry film made by a righteously angry activist director, whose targets include militarism, colonialism, capitalist greed and corruption.

Van Peebles, like his father, gives the audience a glimpse into the mind of the protagonist, where things are not always pretty. And he’s not without a dark sense of humour and mischief that help to make the film superior and rousing entertainment.

Nobody did more to promote the image of the Old West as a place occupied by honourable, tough white men with guns than director John Ford and his longtime collaborator John Wayne. Towards the end of his life, Ford experienced something of a creative crisis of conscience and made a series of films in which attempts to apologise to Native Americans, women and, finally in this 1960 courtroom drama, African Americans.

Ford, realising that the burgeoning Civil Rights movement was rightfully going to change the racial politics of America forever, and moved by the injustice meted out to  black people for centuries, looked to former NFL superstar turned actor Woody Strode to play the titular role.

Its depiction of a black man who is righteous and heroic because he meets the standards of acceptability of white society may seem condescending now, but it remains for its time and within the prolific output of Ford, a very progressive film.

Strode plays a US cavalry officer who is accused and put on trial for the rape and murder of a white women; it’s a gripping piece that showcases Ford’s particular talent for creating memorable secondary characters.

It may not have changed much in the way of the representation of black characters in Westerns at the time or since, but it certainly represents a solid, heartfelt attempt to get to grips with the racial injustices of American history.

All of that would have been impossible without the brilliant and sensitive performance of Strode who seethes with a determined fury at the injustice of his situation, but also realises that it’s a symptom of a far deeper problem that America is still battling 60 years later.

Buck and the Preacher — Rent or buy from Apple TV+

Sidney Poitier and Harry Belafonte were the biggest African American names in popular entertainment when they teamed up for this 1972 revisionist Western. Poitier directed the film, and in so doing became the first African American at the helm of a major Hollywood studio production.

It broke a number of barriers: featuring an all-black cast, including Poitier, Belafonte and Ruby Dee; and telling a story that focused on black solidarity in the West, and the relationship between African Americans and Native Americans — who are given the hero’s role.

Poitier plays Buck, a former Civil War soldier who assists black fortune seekers, newly released from the bondage of slavery, as they make their way westwards in search of the American Dream.

Poitier displayed a talent for freewheeling, easy humour that was decidedly at odds with the upstanding characters he played, but which is perfectly suited to a story that offers a rambunctious take on the biblical story of Exodus, transposed on the stark landscape and everyday life of the American West.

As Europe and Britain commemorate the fallen in what was supposed to be the war to end all wars, here are three poignant reminders of the futility of ...
Art & Design
6 months ago

Halloween is done and dusted, but these three horror flicks are great at any time of the year
Art & Design
6 months ago

Three films that offer an inside view on what happens when being in control of information goes to your head ... or where the sun doesn’t shine
Art & Design
6 months ago
Next Article
© Wanted 2022 - If you would like to reproduce this article please email us.