The rising star’s works on the solo show, titled ‘Makwande’, taps into a long tradition of social and domestic realist painting in black SA art through the twentieth century 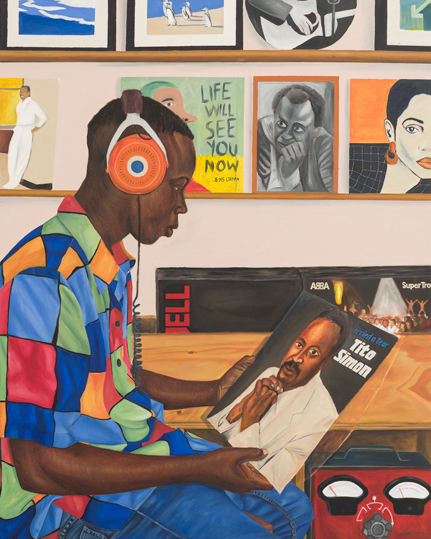 Realist painting is making a comeback on the international art scene, with colourful palettes, domestic scenes and informal portraits prominent, especially among rising contemporary painters of black life such as Jarvis Boyland or Alfred Conteh.

The trend has not gone unnoticed in SA. Rising young star, Aviwe Plaatjie, a Cape Town-based painter and printmaker, has just sold out his debut solo show at Ebony Curated gallery in Cape Town. Essentially self-taught, his natural talent was nurtured first in informal part-time art classes and then with stints at Good Hope Arts Studios and in a mentorship programme at the Visual Arts Network of SA, where he was introduced to linocut printmaking.

His works on the solo show, titled “Makwande”, although vibrantly contemporary in style, subject and attitude, in fact taps into a long tradition of social and domestic realist painting in black SA art through the twentieth century. The most famous exponents of the style were Gerard Sekoto and the Eastern Cape’s George Pemba. Plaatjie’s paintings are all character studies rather than portraits as such, with his figures and subjects appearing against imaginary, idealised and brightly coloured backgrounds.

The abstraction and patterning of some of these backgrounds emphasises the meticulous detail of the painting of the subjects themselves, bringing them more strongly to life. In working class and black communities that are often not visualised in their everyday detail, and certainly have not been portrayed positively in the past, Plaatjie’s character studies and visual narratives become aspirational — a vividly reimagined slice of people’s normal lives.

Despite the growing hype and popularity, the artist himself wants to keep things on an even keel: “My inspiration comes from the world around me — I love absorbing my surroundings. I simply comment on life.”

Art and about: Five local exhibitions not to miss this June

Opening this weekend, Strauss & Co’s auction is set to be a feast for art lovers looking to expand their collections
Art & Design
1 year ago

Enjoy a wall-by-wall encounter with street art on a monumental scale
Art & Design
1 year ago
Next Article
© Wanted 2022 - If you would like to reproduce this article please email us.