Life’s pretty good at the top of these gorgeous penthouses 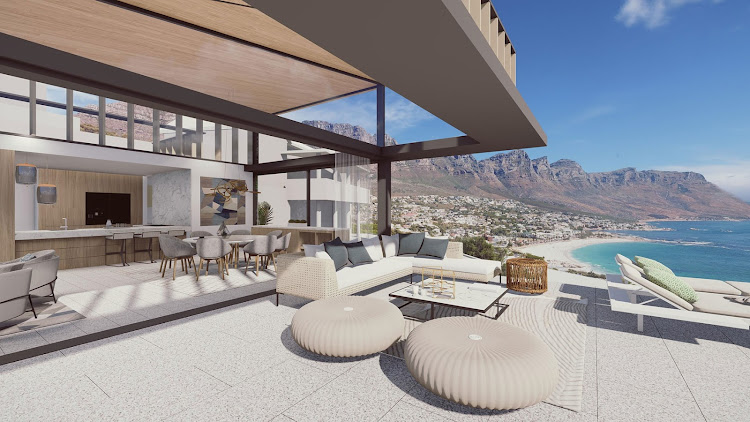 If you’re keen to call Africa’s tallest building home and have about R300-million to splurge on a trophy abode, the triple-storey penthouse at The Leonardo on Sandton’s Maude Street should be on your radar. The uber-fancy Leonardo Suite has palatial proportions and spans the top three floors of the 55-storey skyscraper. The apartment, which has 360-degree views of Joburg, boasts a colossal 1,000m² rooftop terrace and 20m lap pool.

But if Cape Town’s swanky Atlantic Seaboard is more up your alley, a penthouse in Eventide, which occupies an enviable beachfront position on Clifton’s Victoria Road, is up for grabs for a cool R120-million. If sold at or near asking price, both these properties will surpass the previous record price achieved for a penthouse in SA — a 1,000m² apartment at the One & Only Waterfront Hotel that sold for R110-million in 2008.

However, if R100-million-plus isn’t quite in your range, there are plenty of other penthouses on the market from which to choose at more palatable prices. Still, be prepared to pay a premium. In fact, Pam Golding Property (PGP) group CEO Andrew Golding says a penthouse will typically fetch 20%-25% more than other apartments in the same building.

Penthouses usually occupy a prime position at the very top of a building, he says. “As such, they are light and bright and offer the best views. Most come with expansive outdoor entertainment spaces such as rooftop terraces and private pools.” Golding adds: “Buyers are also paying extra for the prestige value that comes with owning a big-ticket penthouse, of which there is limited supply.”

Ross Levin, managing director of Seeff Atlantic Seaboard and City Bowl, reckons the premium for the most desirable penthouses in the Mother City can reach 40%-50%, particularly if they tick all the boxes in terms of exclusivity, privacy, and views. He cites the V&A Waterfront Marina’s front yacht basin and the One & Only Waterfront Hotel as examples.

Levin says that, because of limited supply, penthouses also tend to achieve better capital growth over time than most other residential brick-and-mortar investments. For instance, a penthouse that sold in the exclusive Oysters development in Umhlanga off-plan for R13-million about four years ago resold at R29-million two years later. It has since been refurbished and is now valued at around R35-million. A penthouse in Sandton’s Michelangelo Towers that sold for R43-million in 2014 was back on the market for R50-million in 2018.

Paul Upton, head of developments at Dogon Group Properties in Cape Town, agrees that penthouses generally achieve better resale values than other apartments in the same building. However, Upton says not all penthouses are what they’re made out to be. “Penthouses will only achieve premium prices if they align with buyers’ expectations, especially in terms of the quality of finishes,” he says. “Buyers are looking for carefully designed spaces with meticulous attention to detail.” And it’s more than simply a nice place to hang your hat. As Upton puts it: “For many, a penthouse represents the dream of owning the best of the best — a trophy property that offers the ultimate in lavish living.”

Industry players say penthouses that are part of a luxury-hotel development are becoming particularly sought after due to access to a concierge service and free use of the hotel’s leisure amenities. Optional participation in a hotel-managed rental pool is also an added bonus for many, especially offshore buyers. 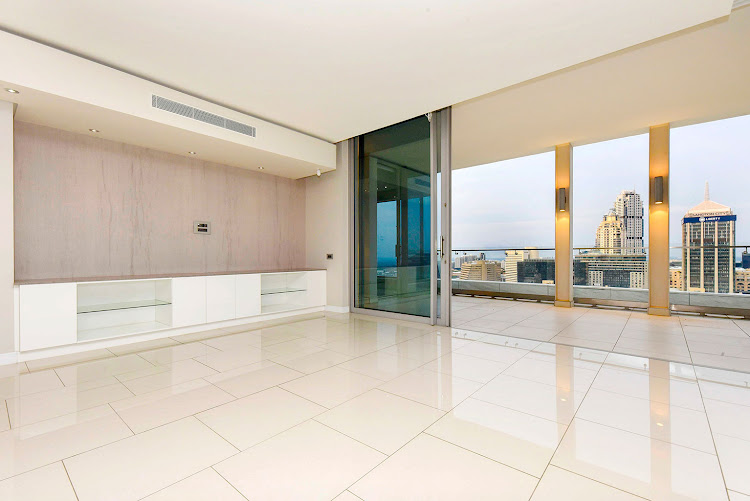 Looking at some of the most desirable penthouses currently on the market, buyers are spoilt for choice. For instance, at Sandton’s upscale Embassy Towers in Sandhurst’s Empire Place, PGP is selling a three-bedroom penthouse sized at 335m² for R19.5-million.

The apartment, which has never been occupied, boasts 180-degree views of Joburg’s skyline. Additional features include a large balcony, four basement-parking bays, and a storeroom. A few blocks down the drag, Seeff is selling a newly completed two-bedroom penthouse at The Capital on the Park on Katherine Street for R23-million. The property has stunning views and comes fully furnished, including a range of Smeg appliances. The cherry on top is a private sky deck with rim-flow pool. The complex offers a concierge service, a car wash, gym, spa, and secure basement parking along with conference/meeting rooms, a restaurant and cocktail bar. The property is also available to rent at R150,000 a month. 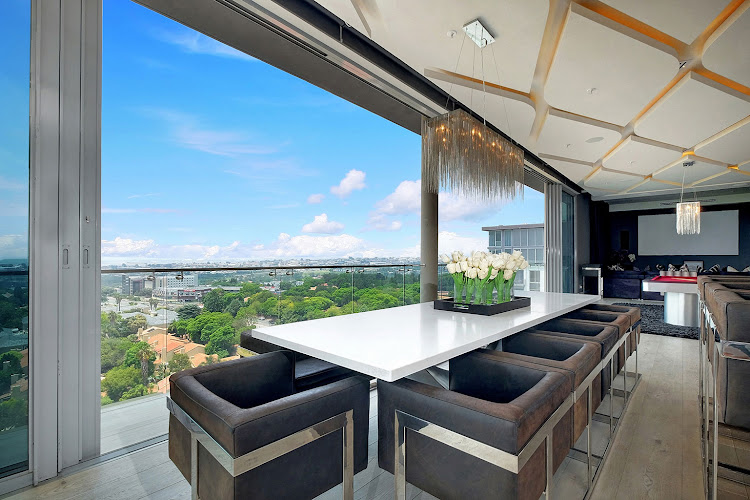 The Capital on the Park, Sandton.
Image: Supplied

At mixed-use Waterfall City near Midrand, Attacq is offering a number of penthouses for sale at its high-rise Ellipse development, for between R12.6-million and R17.5-million. The units, which have unparalleled views of the Joburg skyline and Magaliesberg mountains, are sized up to 386m² and include a private rooftop garden, jacuzzi, and heated pool. A flagship triple-storey penthouse measuring in excess of 1 100m² was recently sold for more than R50-million. Ellipse will comprise four residential towers and a total 590 apartments on completion at the end of 2022. 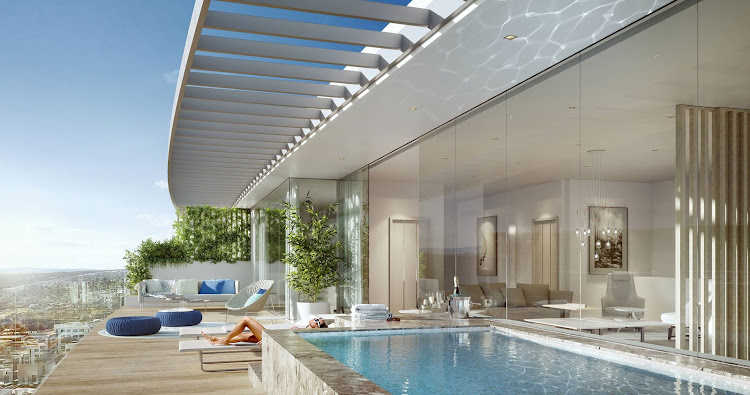 On KwaZulu-Natal’s north coast, a 500m² penthouse apartment at Edge of the Sea, which overlooks Umhlanga’s main swimming beach and has direct access onto the promenade, is available through PGP for R22-million. Open-plan living areas lead to a large covered balcony with sea views. Two basement parkings and direct lift access complete the picture.

Seeff has a penthouse on the market at Umhlanga’s small and exclusive Waterfall Cascades development for R16-million. The beachfront duplex has four en-suite bedrooms and an open-plan living area and kitchen that flow to a large outdoor terrace. The property boasts expansive ocean views from both levels. 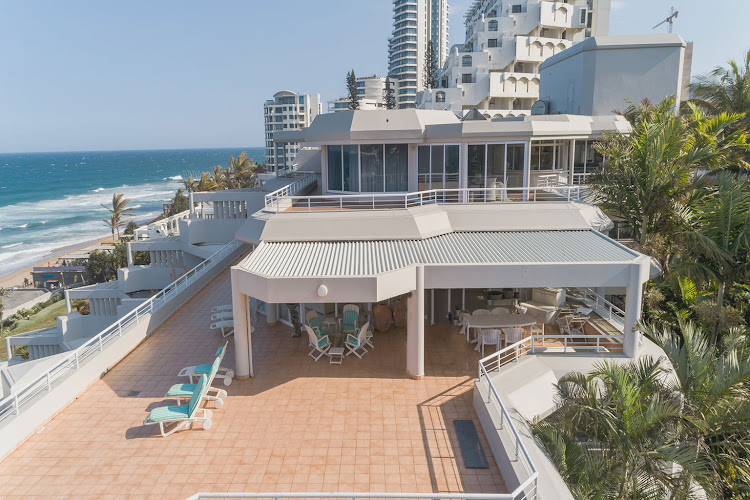 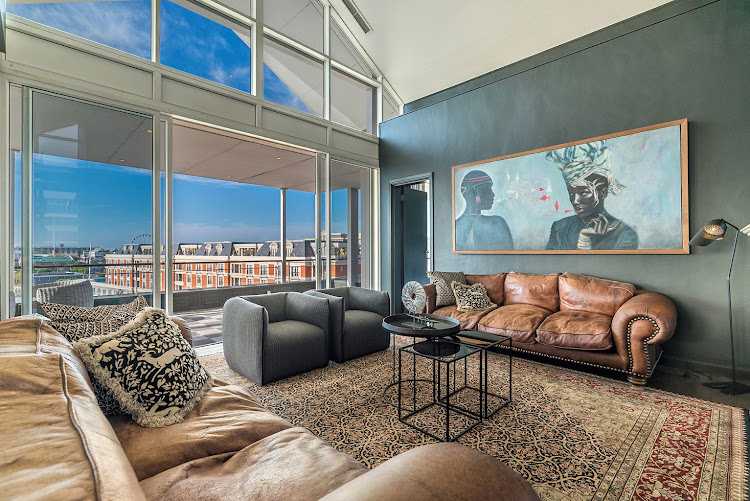 In the heart of Green Point, Re/Max Living is marketing a “supersized” penthouse on the top floor of luxury boutique hotel, Cape Royale, that will set you back R45-million. The property, which is described with such superlatives as “residence extraordinaire” and “habitat fit for a king”, has five bedrooms and seven-and-a-half bathrooms. High-end finishes include marble flooring, solid-wood panelling, a hand-crafted Valcucine kitchen, and a fully fitted butler’s suite. Residents have access to the hotel’s in-house spa, gym, business centre, rooftop pool, and sky bar.

Kloof Road, one of Clifton’s most expensive streets, will soon be home to a unique penthouse property marketed “off-plan” by Dogon Group Properties. Known as 195 Kloof Road, the property will, on completion, consist of two dwellings — a three-bedroom penthouse on top and villa on the lower level — and comes with a combined price tag of R115-million. The two properties are available to purchase together or separately. Both units comprise just over 500m² of living space and each has its own garden, pool, and parking for four vehicles.

Sea for yourself: Ellerman House is Cape Town's most exclusive address