Digital art is blowing up, thanks to NFTs and cryptocurrency. But can the traditional art market handle this level of disruption? The global art world is abuzz with the news that heavyweight auction house Christie’s recently auctioned off, in an online auction of course, a digital collage by an artist named Beeple for $69.4-million, in a groundbreaking sale of a non-physical artwork. The price for the piece, titled Everydays: The First 5,000 Days, puts Beeple (real name Mike Winkelmann) in the top three most valuable living artists, along with more familiar contemporary art names Jeff Koons and David Hockney. The sale marked a first digital-only sale for a major auction house, and it was paid for with cryptocurrency, another first.

Why all the fuss? Well, maybe you’ve wondered why the Mona Lisa is what it is. Probably the most famous artwork in the world is a little, um, unprepossessing in real life. It’s small, quite gloomy, and indistinct; hidden behind its security glass and a horde of tourists taking pictures of each other taking pictures of it (pre-pandemic, that is).

What it does have is an aura — like other famous artworks, it is an irreplaceable and unique object, in its case probably also priceless. The whole art market trades in exactly this quality, assigning value to an object — the artwork — that is unique, or, to use the rather awkward term that Beeple’s sale has made all the rage, it is non-fungible.

The real big news about Beeple’s record-breaking sale is that the work was accompanied by an NFT, or “Nifty” — a digital, non-fungible token that is unique and cannot be replaced. The uniqueness of collectible artworks — their rarity — combined with their authenticity as works by a particular artist gives them a large part of their market value. The problem for digital artists creating and distributing work on the internet has been the works’ propensity to be easily copied and pasted. Artsy reports that the founder of NFT fund Metapurse (yes, they even have asset management) bought the piece. The pseudonymous buyer MetaKovan says the piece is worth multiples of what he paid for it — in his view, up to $1-billion — because “it is the most valuable piece of art for this generation”.

Can’t get to Paris? View the Louvre’s 482,000-piece collection online — for free

It is the NFT, says Beeple himself, that ushers in “the beginning of the next chapter in art history”. NFTs are electronic identifiers that confirm a digital-art object or collectible is real by recording its details on a distributed and well-nigh hackproof digital ledger known popularly as a blockchain. NFTs can also show that a digital-art object is unique, thus solving its duplication problem. NFTs go hand in hand with the rise of cryptocurrencies, which are experiencing a boom in the global lockdown era. Hilariously, the first extensive use of NFTs was on website CryptoKitties in 2017, assigning them to digital cats on the site, which were then bought and sold as unique items.

CHANGING THE MARKET FOR ARTISTS

For artists, the advent of NFTs is a potentially productive disruption of the rules of engagement in the art market. The technology fundamentally changes two key aspects of the traditional art market. Firstly, provenance in the traditional art world, which provides authenticity and value to works if the chain of ownership has been reputable, is notoriously secretive. This gives rise to the potential for forgery and fraud, as a recent famous New York case involving forged 20th-century masterworks by Rothko and Jackson Pollock, among others, shows. NFTs ensure transparency of the provenance of a work by making information about past sellers and prices publicly available.

Secondly, the technology allows individual artists and the selling platforms offering digital works to include resale royalty provisions in the rules governing the secondary market, such as auctions. This is a real bugbear in the world of analogue art, where works can change hands for millions in the auction market and the artist doesn’t receive a penny.

The advent of NFTs may force changes in the world of physical art too — not only in terms of resale royalties but also in terms of copyright protections and image rights. The other side of this coin is that the digital realm of NFTs is too volatile to immediately replace the traditional value mechanisms of the analogue art world. Mainly this is due to the massive currency fluctuations undergone by the cryptocurrencies used to buy and sell most digital artworks. There is also the unprecedented legal status of such transactions, as well as unique insurance challenges — for example, who is responsible if a work gets destroyed by an online virus?

That’s not to say that auction houses and galleries are entirely averse to selling digital art. Despite the handwringing about losing the sacred relationship to a physical artwork that characterises traditional collecting, the possibility of making huge amounts of money while not having to worry about an actual object is pretty tempting. For the Beeple sale, Christie’s had no costs or risk associated with storing, handling, cataloguing, photographing, and insuring a physical work of art — an attractive proposition for them, if maybe a worry for some staff facing future redundancies. 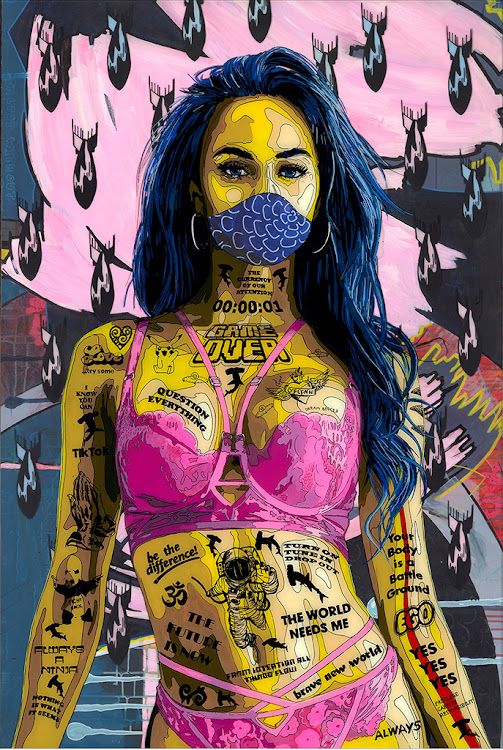 One might also understand the NFT phenomenon as another bubble investment market — this time in cryptocurrencies — driven by already wealthy tech speculators, who happen to be younger and more digitally savvy than traditional art collectors. That this new hype crowd can also be socially and politically regressive has just been revealed by a closer inspection of Beeple’s artwork. Everydays: The First 5,000 Days is a digital collage, comprising one digital image saved each day by Beeple since 2007. ArtNet has spotted a number of homophobic, racist, and sexist images among the overwhelming plethora, making Beeple perhaps just another regressive fratboy US tech-head rather than the standard bearer for new digital art.

The reverberations are being felt locally, though the nature of our unequal society and its massive digital divide means that tapping into a relatively obscure digital-art phenomenon remains the preserve of the connected and privileged. Art gallery WorldArt in Cape Town is the first South African institution to go to market with an NFT artwork. Artist Norman O’Flynn’s gif Da Bomb is on auction on digital-sales marketplace OpenSea until 16 April. The gallery is flighting a hybrid model for this pioneering experiment in the South African market — the winning bidder will be the owner of the digital artwork’s NFT and will also receive the original painting, a 1.5m x 1m Timekeeper portrait painted on Plexiglass, but they can pay entirely in cryptocurrency. As with many such NFT artworks sold elsewhere, resale royalties are built into the digital certification. “I am particularly thrilled that this mechanism guarantees artists royalties when their artworks are resold,” says gallery owner Charl Bezuidenhout.

WorldArt is one of the galleries on the Latitudes Online art-fair platform, which has had notable success in transitioning from a physical art-fair model to an online sales and exhibition platform early on in the Covid-19 lockdown. Founder and director Lucy MacGarry is optimistic about the technology locally: “We are pretty excited about the potential for NFTs locally. They can be a positive disruption, enabling artists to access markets, collectors, and contexts that might otherwise be inaccessible to them. We have many creatives in the digital creative space in Africa. NFTs now enable many of these artists to monetise their creations. NFTs make it far easier to reach a global audience almost instantly and this is something that Africa can leverage to highlight our epic creativity. They also manifest within the context of digital art two key aspects that the physical art market has always depended on: validation and rarity. As a function of a direct relationship with ever-expanding cryptocurrencies, the phenomenon can only increase in volume and value as a new marketplace for digital art.”

Matthew McClure asks whether, post-pandemic, art fairs and galleries will cede power to the social-media artist
Art & Design
1 year ago

Both individual creatives and the businesses that support them are finding novel ways to market and sell their wares, even in the thick of isolation
Art & Design
1 year ago