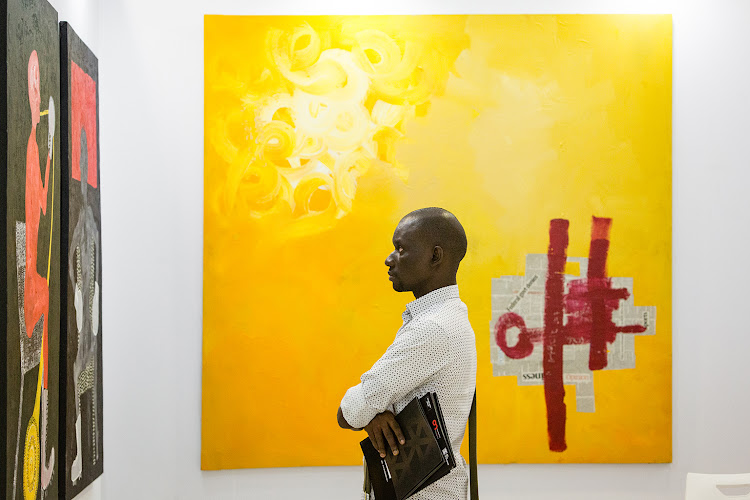 African artists, curators, scholars and collectors are appreciated at international platforms such as the Venice Biennale, Documenta, the Museum of Modern Art, Tate Modern, and Centre Pompidou, as well as at the Art Basel, Frieze, and Armory Art Fairs. They are contributing to the operation of these platforms and receiving commissions and awards. Their artworks are also acquired by renowned institutions, and private and public collectors.

This year, African curators and artists are involved in a range of superb projects. Take the dynamic 10th Berlin Biennale curated by Gabi Ngcobo and her team, Nomaduma Rosa Masilela, Serubiri Moses, Yvette Mutumba, and Thiago de Paula Souza. In Munich, Mpho Matsipa curated African Mobilities, an exhibition that is an intersection of architectural, visual, and sound works; and Simon Njami delivered his second iteration of the exciting, if unpredictable, Dak’Art Biennale in Senegal. And William Kentridge’s The Head & the Load, an ambitious hybrid performance production that reflects on the participation of Africans in the First World War is showing at the Tate Modern’s Turbine Hall in London.

Ngcobo and Elvira Dyangani Ose are members of the finding committee that is responsible for selecting the next artistic director of Documenta 15 in 2021. Documenta is one of the major international art projects: its last edition was co-curated by Bonaventure Soh Bejeng Ndikung in 2016. Olu Oguibe was the recipient of its prestigious Arnold Bode Prize for his conceptual piece, The Obelisk, a tall, standing monument dedicated to strangers and refugees in Kassel, Germany where this mega-event takes place every five years. Okwui Enwezor was the first African to curate Documenta 12 in 2006. After he expanded its Eurocentric limits and opened it up to the diverse cultural producers of the world, he was appointed the artistic director of the 2017 Venice Biennale.

Regarding the art market, African art traded very well at the Art Basel, Frieze, and Armory Fairs. Internationally renowned galleries such as Marian Goodman and David Zwirner, based in London and New York, as well as Michael Stevenson and Goodman Gallery in South Africa, made good sales from the artworks of African artists they presented. So did the young Blank Projects in Cape Town, which is slowly asserting itself by frequently partaking in prime art fairs within and outside South Africa.

Liza Essers deserves a special annotation. She celebrates her 10th anniversary as the director who has magnified and modified the legacy of Linda Givon’s Goodman Gallery, a legacy without whose existence it is impossible to imagine what shape South African art would be in right now. Essers has brought into effect various projects, strategic partnerships and curatorial interventions that are a significant contribution to broadening the parameters of contemporary African art. In resisting the pigeonholing of African art, she prefers to work in a global spectrum of contemporary art, wherein Africa is no lesser part, but an equal contender in dialogue with other cultural geographies of the world.

Essers has achieved this mission working with young and established international artists whose artworks she has shown locally and globally. Through her directorship, she made the Goodman Gallery a platform that brings the global to South Africa and South Africa to the global arena — an incredible enterprise that so far is matched (if not superseded) only by the Michael Stevenson Gallery. Essers’ accomplishment cannot be underestimated, and it is worth recognising and encouraging in an art world that is saturated with (white) patriarchy.

Interest in contemporary African art should also recognise and attribute the long overdue credit to their radical, ground-breaking work

It is important to recognise the Joburg Art Fair’s contribution, not only as the first of its kind in Africa, but also for continuing its operation “to showcase the rise of contemporary African art to an international audience” under the directorship of Mandla Sibeko, who is passionate about delivering an art fair that speaks to Johannesburg as an international metropolis quite comparable to other economically viable and culturally vibrant cities in Africa and around the world.

Worth mentioning, too, is the auction house Bonhams’ African Now auction, as well as the two new museums — Zeitz Museum of Contemporary Art Africa and the Norval Art Foundation in Cape Town — which are adding an institutional incentive to the rising flare of contemporary African art. It is hoped that the young Wits Art Museum in Johannesburg will soon make itself a scholarly and culturally active platform, so its contribution to the significance of African art is recognised.

There are also innovative platforms that are contributing to the spotlight on African art. They are Bisi Silva’s Centre for Contemporary Art Lagos in Nigeria, Koyo Kouoh’s Raw Material Company in Dakar, and Ndikung’s Savvy in Berlin. Aida Muluneh’s Addis Foto Fest in Ethiopia, the LagosPhoto Festival in Nigeria and Bamako Encounters in Mali contribute immensely to the evolving practices of photography on the continent.

Equally important are the instructive publications of Sue Williamson’s ArtThrob, Brendon and Suzette Bell-Roberts’ Art Africa, and Julia Grosse and Yvette Mutumba’s Contemporary And (C&). Their written and visual contents are indispensable archives and edifying literature about the unfolding discourses, practices and developments pertaining to contemporary African art.

It is these platforms and cultural producers who keep contemporary African art alive, contributing to its expansion and circulation in the global arena of cultural flows. Much of what they are (and are becoming) is due to several decades of unrelenting struggles of assorted minorities against neglect, marginality, humiliation, and exclusion by Western institutions that dictate the terms and procedures through which contemporary art is mainstreamed.

By empowering artists to speak from the heart, we are encouraging narratives with the power to inspire social change
Voices
3 years ago

- From the September edition of Wanted magazine.