For over five decades, carpenter Joseph Ashong has been fulfilling the opulent end-of-life fantasies of wealthy Ghanaians. Better known by his alias, Paa Joe, this illustrious fantasy coffin maker, who turns 70 this month, learnt to make elaborate funerary caskets shaped and painted to resemble sharks, lions, eagles, crabs and various consumer objects from his uncle, Kane Kwei. Among the work-in-progress coffins recently on view in his workshop outside Accra were a lacquered carp, spiral seashell and elaborate chameleon.

Paa Joe doesn’t talk much when foreign visitors come to his studio in Teshie. He is happy to pose for a photograph, but the portly carpenter leaves the exhausting business of answering why and how to his son, Jacob Tetteh-Ashong. It was Jacob who told me that the chameleon was earmarked for Los Angeles art dealer Stefan Simchowitz. Variously characterised as “Satan” and “the Donald Trump of the art world” for his aggressive speculation, including in young Ghanaian artists, Johannesburg-born Simchowitz may be controversial but he is not the first western collector to knock on Paa Joe’s door in search of a fancy coffin.

Ever since Paa Joe’s work was included on Magiciens de la Terre, a landmark 1989 exhibition in Paris that included the likes of Marina Abramović, John Baldessari and Louis Bourgeois, collectors have beat a trail to his door. Business boomed well into the new millennium. In 2006 the studio employed 10 young apprentices. But the art world is a fickle mistress and Paa Joe’s enterprise lurched into financial difficulty around 2013. Tetteh-Ashong has been instrumental in reviving the studio, notably through tie-ups with key members of Accra’s burgeoning art community.

Later this month, Paa Joe will exhibit six new coffins at Gallery 1957, a young Accra gallery established by Lebanese-British collector Marwan Zakhem in 2016. The exhibition, which titled One Does not Take it Anywhere, is a collaboration with performance artist Elisabeth Efua Sutherland, a granddaughter of one of Ghana’s best-known playwrights and children’s authors. The exhibition charts new territory for Paa Joe’s studio. Focusing on the fictional passing of a young girl, the exhibition draws on Sutherland’s background in experimental theatre. For Zakhem, it is an opportunity to further promote Ghana’s vigorous art scene.

Much like Italy in the 1960s and South Africa in the 1990s, Ghana is experiencing a creative renaissance. Zakhem, who heads up the Ghanaian and Senegalese arm of a family-owned engineering, construction and investment group of companies founded by Lebanese industrialist George Zakhem in 1964, wants Ghanaian artists to capitalise on this attention. His chief ambition is build a domestic market. It is an ambitious play. Ghana has only a handful of serious collectors, among them investor Seth Dei, whose Blue Skies fruit-packaging enterprise services clients like Woolworths.

The Afrohypnotising sounds, space and disruptive work of Jojo Abot

Describing her sound as Afro-hypnosonic, the Ghanaian artist, who is currently based in New York, will be performing in Swaziland, Johannesburg and ...
Art & Design
3 years ago

Gallery 1957 is based at the Kempinski Hotel, a franchise of the luxury Swiss resort and spa hotel group built and operated by Zakhem Group. The hotel’s lobby announces Zakhem’s progressive tastes and includes a jute sack wall installation by Ghana’s hottest young artist, Ibrahim Mahama. Following a very public legal spat with Simchowitz, things have righted for Mahama, who is now represented by London’s blue-chip White Cube gallery.

Zakhem’s gallery represents seven artists, including Godfried Donkor, Sutherland and Va-Bene Fiatsi, a transgender performance artist who exhibits under the alias crazinisT artisT [sic]. Donkor, whose paintings can be seen at the Zeitz Museum of Contemporary Art Africa in Cape Town, is Gallery 1957’s biggest “name” artist. His circle of friends include South African painters Lisa Brice and Johannes Phokela, also the Britain Peter Doig. Physically tall yet gentle in person, Donkor is a passionate defender of painting.

“Painting is difficult, and you have to show that difficulty,” he told me. “It is not just technical, but emotional.”

The centrepiece of his recent exhibition at Gallery 1957 was a ten-metre-long oil and acrylic painting, The First Day of the Yam Custom: 1817 (2017). The nine-panel painting is a scaled-up translation of an engraving appearing in an 1819 book by the English explorer and scientist T.E. Bowdich and depicts the yam festival, an important social and political event still held every September when this edible tuber ripens. Donkor’s painting explores the “magnificence” of the royal event attended 200 years ago by Bowdich and is informed by his attendance of the festival in 1995. 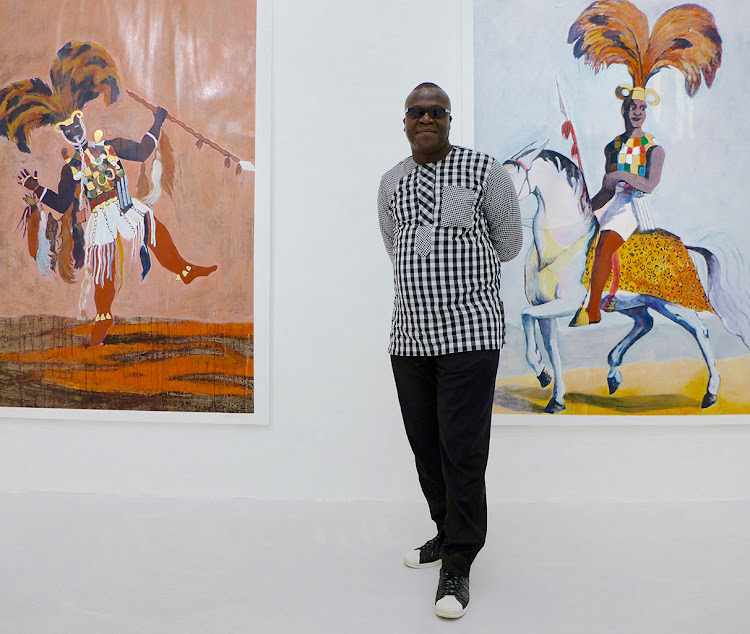 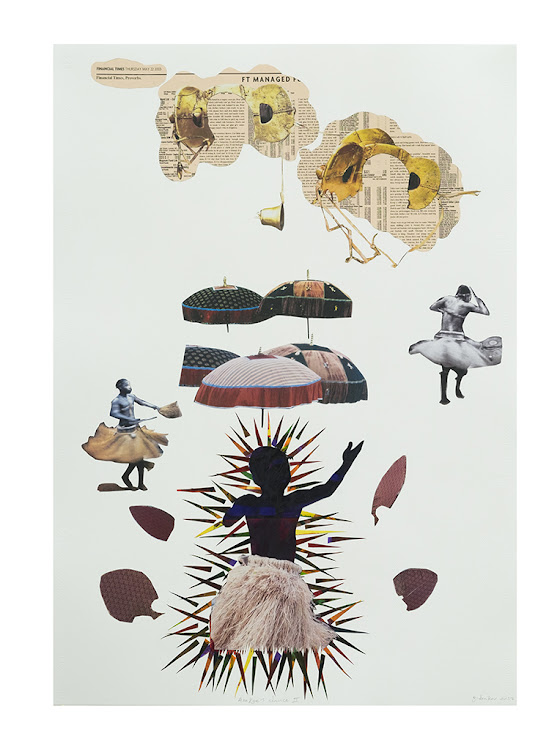 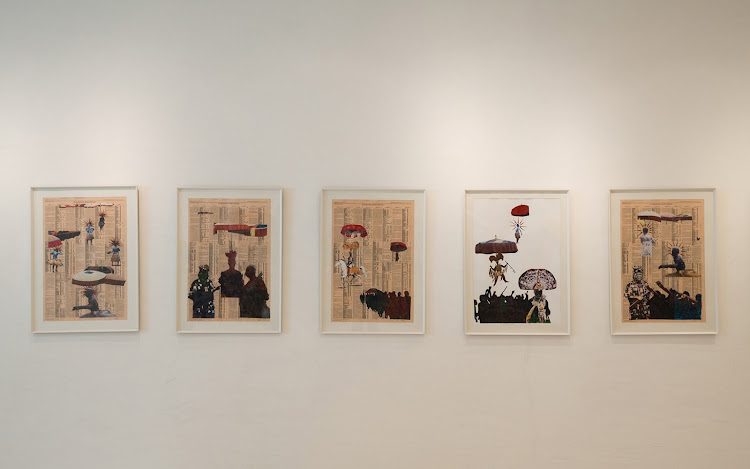 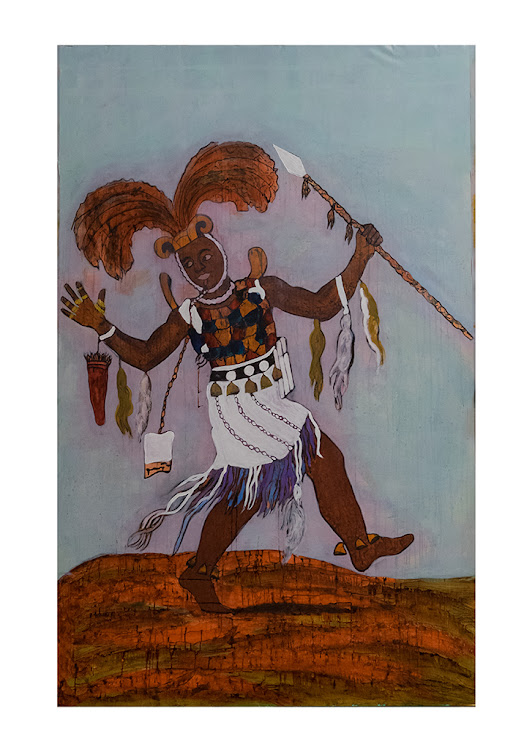 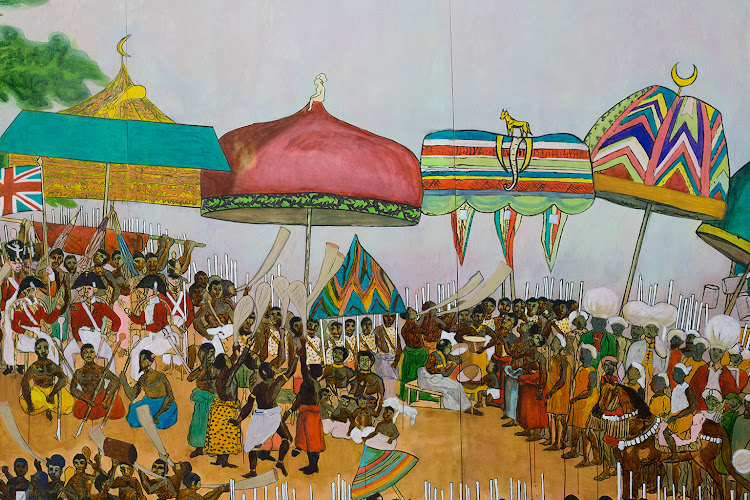 “What is really important about this work is that it was done two hundred years ago, and if you go to the yam festival now it hasn’t changed much,” said Zakhem, who has lived in Accra for 14 years. “The costumes are still the same.”

Donkor worked on his painting for four months in a temporary studio created by Zakhem in an empty mall being constructed opposite the Kempinski Hotel. “It was impossible to find a large studio space for him to work,” laughed Zakhem. He further transformed a retail shell into a white cube to showcase Donkor’s work, which included three additional portraits of Ashanti war captains, ten new collages and a stool, which Donkor covered in his signature gold leaf. The stool is a royal symbol and sacred representation of the Ashanti nation.

Donkor’s interest in depicting Ashanti culture is far older. When he first discussed his ideas with Zakhem, he described his wish to scale-up Bowdich’s engraving as a “dream job” that he had been deferring for decades.

“I immediately said, ‘Let’s do it!’ I knew it would be something special. One of the reasons for establishing the gallery was to have shows like this, to show the world and Ghanaians that it is possible to do this here in Accra. Thankfully he accepted.”

Paa Joe and Elisabeth Efua Sutherland’s One Does Not Take It Anywhere opens on 21 November at Gallery 1957, Accra, and runs until 12 January 2018.

From the US to Ghana: chef puts African cuisine on the map

Ghana-born and US-raised, Selassie Atadika is an advocate for all of Africa's myriad cuisines. Her mission, from Accra, is to bring them to a wider ...
Food & Drink
3 years ago

Six years ago, the basket trade in Ghana's dusty northern Bolgatanga region was booming
Art & Design
3 years ago
Next Article
© Wanted 2021 - If you would like to reproduce this article please email us.