Angus Taylor: an artist with stones in his head

The art of Angus Taylor is a distinctly masculine affair. In his cast are mighty upright superbeings caught in a moment of tension. Not necessarily poised for combat, but bearing the weight of responsibility that comes with experience. Others are men of a non specific culture cutting through shards of rock as they advance resolutely, possibly on a path of acquisition. They could be hunter gatherers searching for sustenance. Or asserting identity, without acquiescence.

Yet an acceptance of human limitation plays a vital part in Taylor’s overall manner of creation. The materials he uses can merely take him to a point of realisation, which means that his audience will continue to wonder whether the work is actually complete.

By his own admission, stone can only be chipped away so much before it disappears. So at a stage he has to pause in order to allow the work to just be. Bronze, when used to glorify power through perfection of form, is a sign of pompousness and theatricality, which is clearly not his thing.

Maverick designer Gregor Jenkin has been flying under the radar for some time. When wanted heard about his upcoming summer exhibition with Southern ...
Voices
2 years ago

During a gallery walkabout for his current exhibition titled In the Middle of It, Taylor reflects on the impediments in the bodies he creates: “If I model something all perfect in bronze and I polish it, and I cast it, I am telling of humanity that’s all perfect and pompous in a way. And, like a character in a good book, or a movie, you can’t be a hundred percent good and you can’t be a hundred percent bad.

He turns to the subject of decay, of deterioration in his metalic bodies that supposedly reflect the aging process. Taylor’s men, although sturdy, are mature. We’ve become so accustomed to a popular culture bordering on ephebophilia (sexual attraction to late teens) that any other depiction of manhood seems politically incorrect.

But here are men, sturdy, apparently in the prime of life – scarred, fighting gravity or succumbing to it.

There’s a natural inclination to seek out meaning in Taylor’s work, something culturally specific to our time and place, relevant to our sociopolitical dramas. But there’s nothing there. 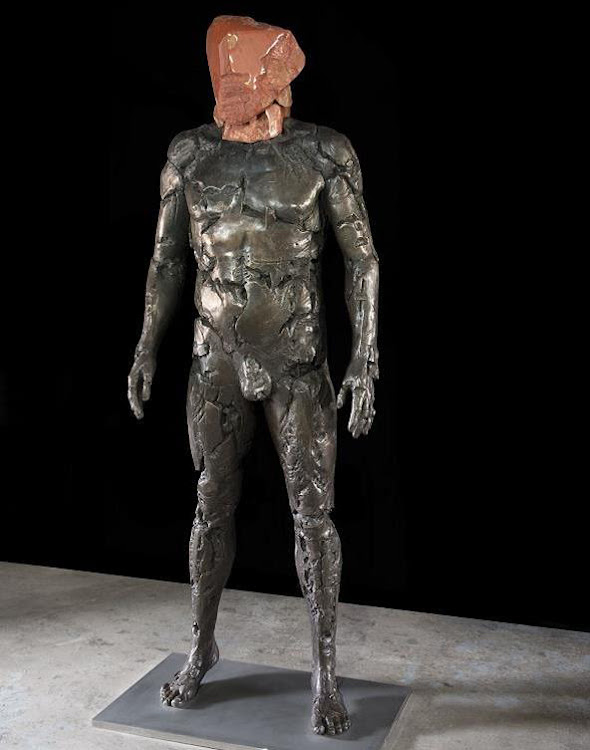 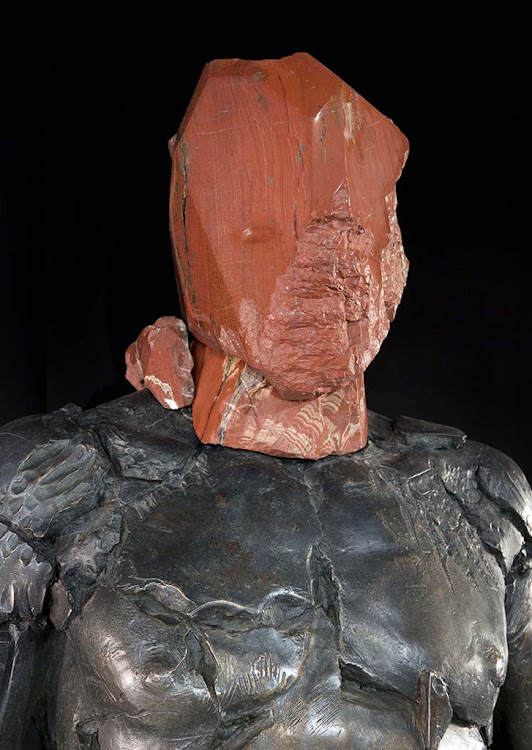 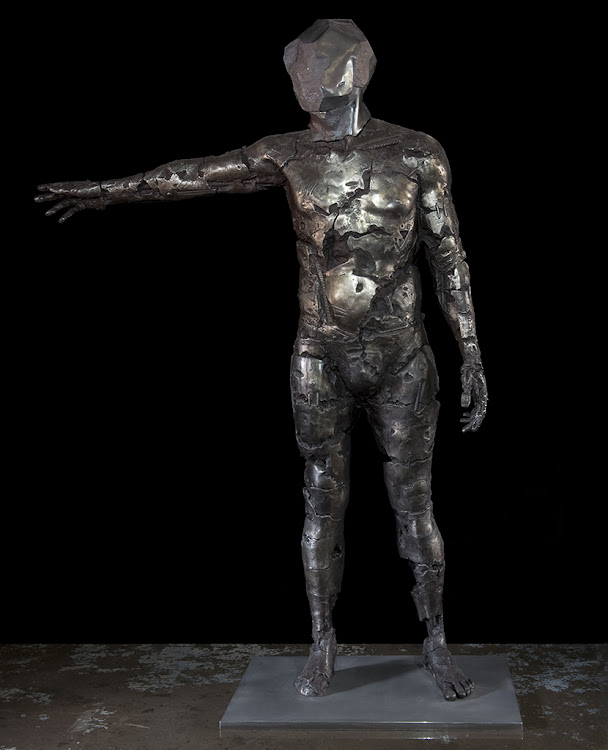 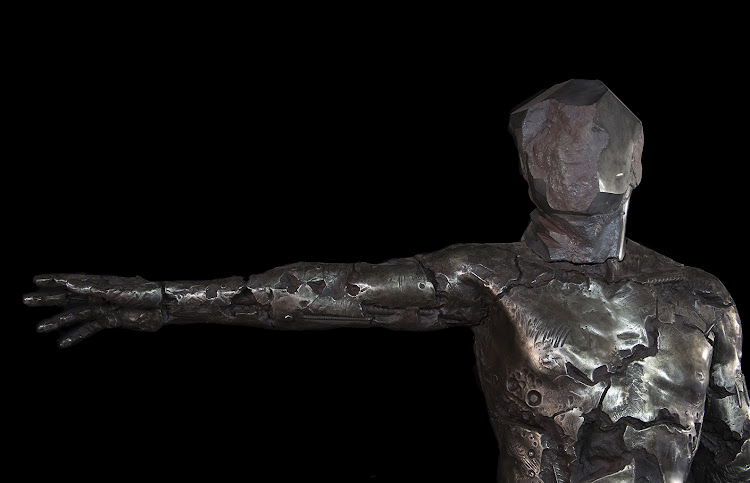 The two largest figures on exhibition are called The Gate Keeper and Thinking. They stand approximately two and a half metres high, side by side in one room. The Gatekeeper is steadfast and sentinel, eternally blocking the entrance to somewhere, while the figure of Thinking has an outstretched arm.

The Gatekeeper is cast in bronze while the figure Thinking is cast in stainless steel. The Gatekeeper has a head of red jasper stone while the figure Thinking has a head of hematite. Clearly, he is drawing a distinction between the body and the mind. The body can be molded, adorned or scarred. But the head is the repository of meaning, imbued with mystery and subject to the old adage that it can be chipped away.  Artistically then it demands a different respect.

“I removed the heads, and did that in an abstract stone,” Taylor says. “Because if you model the head you immediatley look at him to see if you know him, or what group he is from. Is he my side of the river, or my culture?

“As soon as it’s abstract, it’s universal. It belongs to anybody. And the stone specifically has the capacity to do things that I could not think to do. So you will see on his left eye there’s a crack there – and just above his mouth on the right side there is a hole.

The same exhibition traveled first to the Everard Read Gallery in London, in June. In the catalogue introduction to that show we are told that Taylor’s sculptures “transmit an acute awareness of vulnerability and temporality.”

These qualities are not necessarily limited to the human form. In the series titled Tangible Truths as Markers of Time, a semi circle of five obelisk-like stones, on rough bronze plinths, harbour a story of formation billions of years old. They are made of red jasper, Belfast granite, Namibian honey aragonite, banded black chert and conglomerate. They’re like giant jewels and they do cause one to ponder their function, firstly as earth artifacts and secondly as art works. It is these that Taylor uses to describe what he believes is at the core of his practice.

The series Tangible Truth as Markers of Time
Image: Supplied

“I think I have an irritation with human grandeur,” he says. “We think we are fantastically grand. Our religions in the past have placed us to the centre of the whole of creation.  We think we are it. If you look at the history of the earth, and I’m sorry if I pee-off some creationists, but (take) 4.6 billion years: if you make that a day, we are the last minute and 40 seconds of the day.

“The rest of the time we weren’t there. So the idea that we are central to the story is quite nice. But it’s not true. And what we tend to do is take a chunk of stone and we square it off. And then we make a bust of ourselves in bronze and we place that on top because we rule the shit – you know it’s us.

“And when I pick up a stone, this stone is already something. So, if I go and I cut it and I square it off, in a way I kill it.”

Then he paraphrases the great Japanese American sculptor Isamu Noguchi who said something like, “Stone is at the heart of the matter – if I tap it it resonates, and I can understand my whole existance.”

- The exhibition In the Middle of It by Angus Taylor runs at the Everard Read Gallery, Cape Town from 8 November to 30 November 2017.

In his new solo exhibition, Athi-Patra Ruga continues to insert new monuments into our culture, finding catharsis in the process
Voices
2 years ago

The artist describes his work as 'anatomical in the human form, and natural history in the abstraction'
Art & Design
3 years ago
© Wanted 2020 - If you would like to reproduce this article please email us.

Get the picture: What you need to know before ...