Caligrapher Alice Edy spent a month in residency at Nirox creating works for this weekend’s Word Festival and she intends to burn them. We asked her why

“I don’t know if it’s a symbolic concern rather than a legitimate health and safety one,” Alice Edy laughs when speaking of her husband’s questioning her want to burn things. “Even Benji (Liebmann, owner of Nirox) just asked me, how are you setting it on fire? I said, I don’t know? Matches?”

In her latest collection of works named 1147, if one her paper poems are bought she plans on setting it on fire. Those flames and embers are part of the Nirox Words Festival that is, in part, paying homage to seminary artist Willem Boshoff this weekend. One of the reasons Edy was selected to partake in the festivities is because of the work she did on Boshoff in her Masters studies, where she reinterpreted his book of experimental concrete poetry, KykAfrikaans, as she investigated the written practice of language.

It is this practice that she would flesh out this year as she started to adorn abandoned spaces with calligraphic text around Cape Town. Eventually she would be invited to do so more publicly on a wall in Woodstock, on scrolls at the Kalashnikov Gallery in Johannesburg and most recently on the side of the Nelson Mandela Bridge in Braamfontein. Here, she spent five days writing out the 1000 most used passwords on the Internet. 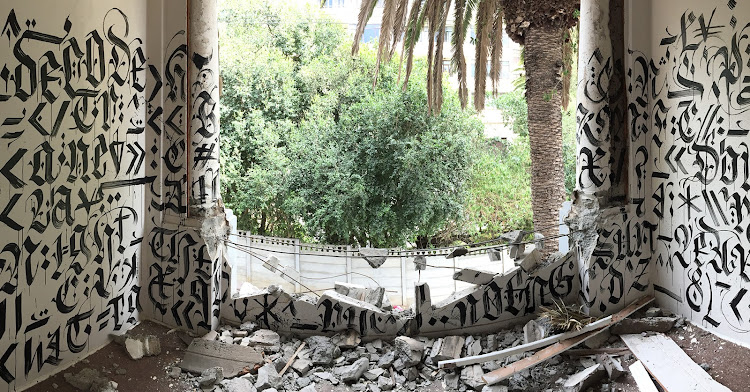 This weekend Edy’s works will be on display a couple of meters away from where she made them; in residency in a sunlit room in a house dedicated to creating art, tucked away near the Cradle of Mankind. While she was there she wrote a total of 10 “poems” – more of a collection of tiny flickering thoughts and stories than any traditional words that could rhyme. Four are written on Somerset handmade paper with ink she mixed out of ash, earth, blood and wine; three were lasered into marble with golden text by the fine folks at the Tombstone Factory; and the last three still await their fate.

Each poem is named after the amount of words within them, the same name written on the corresponding urn that will house the ash of the burnt paper poem. A great sense of loss is meant to be felt when they burn, she says, particularly since they are such hard wrought beautiful objects. It’s supposed to elicit an act of mourning. Those who buy a poem will leave instead with the urn of ash and the memory of work and act. 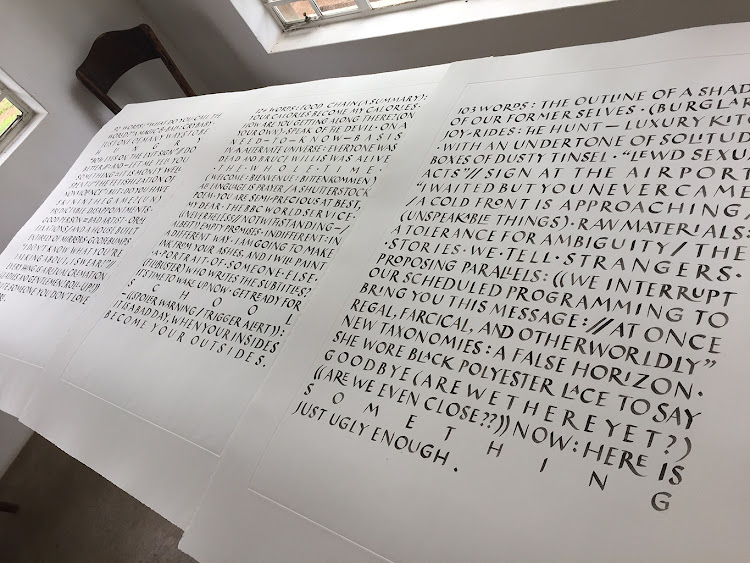 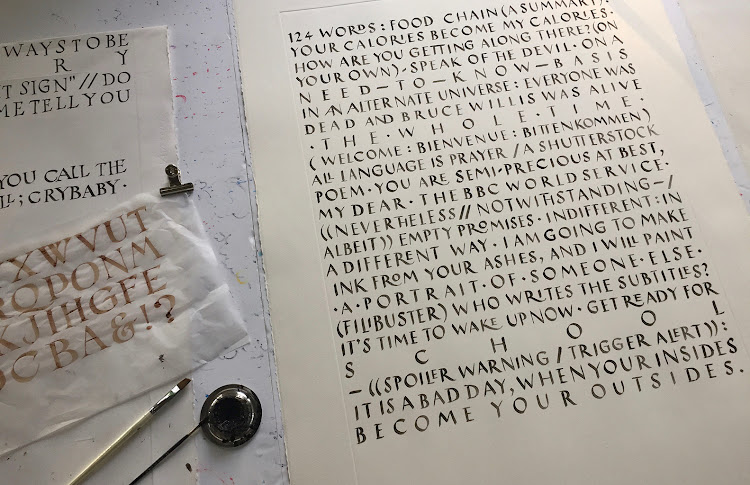 It’s these memories that we discuss with her:

“I don’t know what you are talking about I swear” (I read off one of her poems) I’ve hidden a lot of stuff in them. In amongst the weird writing that doesn’t explain itself. I have written something that is really mine to write. But within all that script I try put a lot in it. There is also a lot of melodrama.

You’re setting things on fire, melodrama seems fitting. Like “A house built entirely of mirrors?” When the project started I thought, “here are some things to think about.” I wanted it to be a little gift for somebody; “you want to think about something, then think about a house built entirely of mirrors.” Little snippets of stories, as though you were channel hopping, you get little glimpses into little narratives that you don’t need to invest deeply into but then that becomes a narrative in and of itself. I find them in these documents and notebooks of phrases I collect randomly and then I try stitch them together. Creating moments of thoughts that flow into a texture or a textile piece of text.

Bookshelf: the power of poetry

Poetry, like any art form, has unique ways of exploring and illuminating ourselves and society
Navigator
3 years ago

How did you land up with this textile? It was actually thanks to Benji (Liebmann) – who is so amazing. We had so many conversations and he just made the point saying “it’s very aesthetic, which if that is what you want then fine, it’s very visually pleasing but I just think you have more to offer in terms of content.” He made the connection between my calligraphic work and the thesis I did on Willem (Boshoff). And he said “I can see that you can write. You write in the sense of language and you write in the sense of painting, why does it not happen together?” and so I did. It’s scary but it feels honest.

They are not entirely aesthetic and they are not entirely language? They have to be both. It’s supposed to constantly playing off the digital and analogue together. The final painting will be analogue but all the typesetting is done digitally. Everything is optical. The idea is to redo it digitally in the same way that it was done 2000 years ago.

It just feels like you made your life very difficult. I know! I made it so difficult, it was very labor intensive. It was to speak to the idea that it’s type set in a Roman way. For you to read them as though they are on a monument but in a more daily content of things that don’t get memorialised. Physically making the epic moments of history in a digital age

No one is memorialising now, that’s the problem. We have so many digital assets but nothing tangible to look at except for “memories” on Facebook. The Internet is going to be our memorial. I like that idea of us trying to remember something. That act of trying to get that memory is also part of the erasure of it. Our most unreliable memories are actually our favourites because those are the ones we take out and handle the most. Each time you handle it, it looses something and you don’t know anymore if you are remembering the thing or the memory of it.

“My advice, lawyer up” I think it’s actually quite amazing that you are making such serious artworks that took you hours to make and you use all that time to write “good person = bad artist” It’s supposed to be quite epic! Honestly, it is a running commentary of what it’s like in my head. I have never felt more like me than I have in these works. I am excited for it to exist. It speaks to civilization. When you go to London or Europe and see any monument to any great war it’s in this font. It’s the notion of being civilized, this is what it meant to be. But what does progress even mean? If it’s written in blood and ash and dirt? That’s what empires are built on and then it goes immediately to be burnt again.

I know, but I like that you call it poetry: Does that seem audacious, perhaps?

It’s modern poetry? I didn’t know what else to call them.

Come and see the work for yourself this weekend at the Word Festival at Nirox before Alice Edy burns them. You can get your tickets at nuticket.co.za

Moving on up: Modern African art to go under the ...

Tips and tricks to turn your house into a home

A stroke of brilliance: SA’s art scene has been quick ...